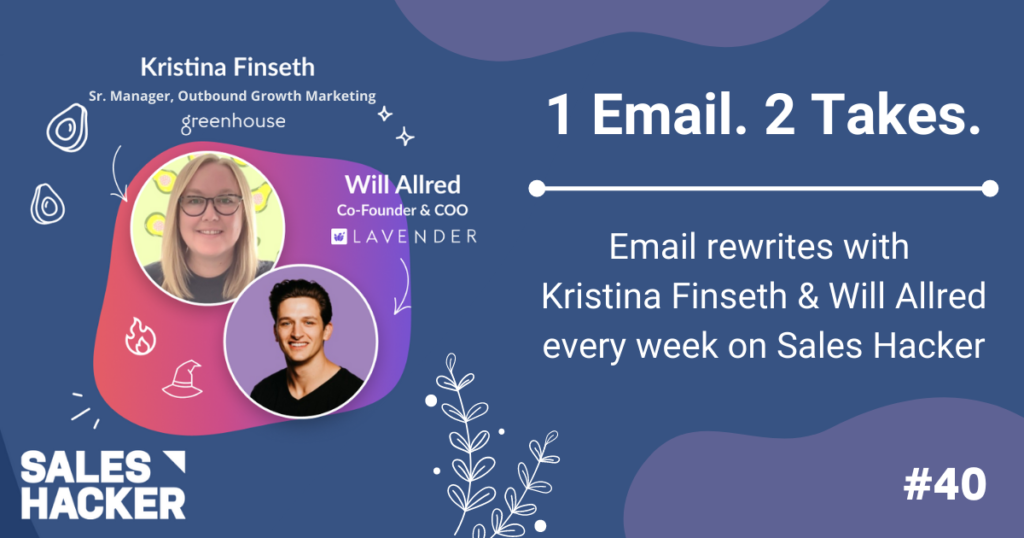 Kristina and Will look at common email mistakes (using real examples) and rewrite them so that you can learn what to do differently.

Join Kristina Finseth (Sr. Manager, Outbound Growth Marketing at Greenhouse) and Will Allred (Co-Founder & COO at Lavender) to get TWO perspectives and TWO approaches on real sales emails, every week on Sales Hacker.

Watch the re-write, and check out the before and after emails below! 👇

Hi Will – after exploring a number of tools similar to Lavender, and am impressed with what you all have built. As you all grow, I’m interested to know how you will bill on usage.

Having finalized unique commercial terms with varying levels of commitment while at COMPANY, it was an easy decision to join a team that is solving the next part of this complex equation – billing and invoicing.

Our founding team at NEW COMPANY comes from Asana, Stripe, Plaid & Samsara, where we collectively experienced the pains that are associated with billing for a usage-based pricing model, and we’ve built a developer-first billing system designed to adapt to your business model.

Curious – is billing something that the team is prioritizing as you continue to scale and implement new products & pricing plans?

Thought you may be interested in this blog post where Scott Buxton, former VP of Finance at DataDog, shares how he took their business from $20m ARR to $1B in a 6 year span with a usage-based model that provided ultimate flexibility and transparency to customers.

Knowing that you operate with a similar business model today, are you currently allocating too many engineering resources to upkeep your in-house billing system, fix breakages and re-integrate whenever there are new product and pricing rollouts?

At NEW COMPANY we’ve built a billing and analytics platform that enables companies like CS1, caseS2, CS#3, etc. to save hours of engineering resources on billing-caused breakages & re-integrations, and allocate that time to core product development.

Happy to walk you through a quick demo for you to envision how NEW COMPANY can further optimize Trylavender billing workflow.

From the looks of the wizard on your website – is it fair to say y’all like to be different?

We’re building a product to make usage based billing easy to implement.

Open to seeing if a few customers want to think differently too?

It’s a blog post from DataDog’s VP of Finance. Did you know usage-based pricing was the reason DataDog went from $20M to $1B in ARR?

I think it could apply for y’all if we find the right prospects.

Let me know if you’re open to brainstorming it.

PS.Given this is totally new, we’d totally take on the dev work.

Have a question about your sales email? Start a discussion in the community. Episode 42: A Mistake in Every Sentence

Episode 41: Personalization and Relevance—Why does this matter?