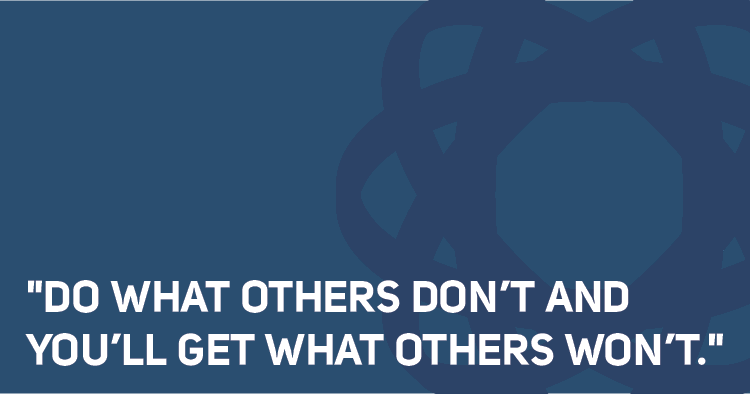 Why did you open my email? Why did you respond? How would you pitch this to others?

All right. Let’s start off with the good shit. So here’s a very simple tool when it comes to messaging and pitching. Everything that I will share with you is SIMPLE, but still it’s going to be very hard for you to do. First, when people ask me, “Steli, how can we get our messaging right—how can we get the right subject line, the right email message, the right pitch?” I tell them, “How about asking your customers?!” How about asking the people who know…that were convinced to buy.

Same thing goes for the subject line. “Hey, you responded before I gave you our demo. When I sent you the email and you replied with, ‘Sure, this sounds awesome, let’s talk!’, what exactly sounded awesome? What exactly about my message was interesting? Let me ask you, before I pitch you what we do, can you pitch me what we do based on the email we sent you??” Super silence. It’s not rocket science, but we all get it.

I had somebody a few days ago tell me how they a really complex product and everybody misinterprets in the email what the product is, therefore everyone is not as interested as they should be. “But when I demo people, the demo kills. They love it.” I said, “Cool! Did you ask them after the demo, ‘Hey, if you had to describe what we do to somebody else, how would you do it? What’s your pitch?” Let your customers educate you on the words they use, the way your pitch resonated with them, and then just sealed it. When you hear a bunch of people say the same thing again and again and again, it might be because it works. Take that and use it!

Let your customers educate you on the words they use and the way your pitch resonated with them.

I was talking to Noah Kagan from Appsumo, an awesome guy and really good friend, and we were talking about one of our marketing things that we’re doing. He asked if we’ve instrumented the metrics so we really know how many new customers this thing drives us. I really didn’t know, and he’s like….”Steli! You’re crazy! Why don’t you call a bunch of recent customers and ask them if they saw that thing?” I’m like, “Oh, wow. I’m so ashamed. I’m preaching this every day and still forget??”

I’ve preached this. So many people when I talk to them a few weeks later, they’re like, “We do this a-b test we’ve tried this new pitch.” I say, “Did you ask some customers?” …. ”Not yet.” What the hell is going on! These things are simple, but they’re powerful. Just ask a bunch of people. What resonates with you? What did you like? How would you describe what we’re doing? It’s not rocket science, people.

Use objections to your advantage

All right. So the next thing is: Embrace Resistance. This is another thing that I love. People tell me all the time, “Stelli, we’re sending this email and then every person replies–the people who reply always tell us, ‘We already have something.’” “And then what did you do?”, I asked.  “Well, we keep sending this email, but people really already have the solution to this.”  My response? “OK, and how have you adopted and learned from this?”  People, we all want to fight reality instead of embracing it.

Can’t these people stop having the solution? No, they can’t. How about embracing that fact? Have you thought about reflecting that in your email?  How about the next thing that they send is, “You know that a huge portion of the people that you send an email to already have the solution, how about starting with that? “Hey, my name is Steli. Let me guess, you already have a solution. Now you might be wondering why the hell am I sending you an email nonetheless!  Here’s why.”  You know, the last 100 customers we had all had prior solutions until we drafted a call for three minutes to show we could drive “X” amount of value to them. That prompted us to be more proactive, and that’s why I’m sending you an email. I know you think it’s not interesting, and I know better than you that it’s going to be interesting.

This might be too crass or aggressive, but at least it realizes that people have certain thoughts and certain resistances in response to parts of your pitch. The other thing is that there might be situations where people already have the solution. Lots of people tell me, “Oh, everybody says we’re such a small start-up.” If everybody says it, how about making it part of your pitch, part of your messaging?

“Hey!  I know what you’re thinking right now. ‘These guys are a small start-up.’ And you’re absolutely right. We’re tiny. We’re so tiny, I’m the founder and I’m speaking to you right now. You know what?  We’re so tiny I’m going to be your success manager. The CEO of the business, 24/7.  I’ll give you my phone number, my address…everything, right?  I’ll buy a FAX if you want to FAX me…everything you want. 100% transparency and access just for you.”

You know what?  Remember when 20 years ago or so you got an email from Google about advertising with them? They were tiny back then! The same thing here! We’re tiny today. But if we succeed (let’s assume we succeed), would you benefit from being part of it from the early days? What’s the reward/risk ratio? If we fail, you’ve lost like a few hundred dollars if you cancel in a few months. What if we win and you were there from the get-go? Embrace it.

You know everybody thinks you are tiny, how about making it part of your pitch versus hiding from it?  Most sales people in sales organizations try to wiggle around or avoid the elephants in the room. They think, “Oh, everybody says this.” So I’m trying to have a conversation and they hold their breath, “Hopefully this is going to be the call when they don’t say this. Hopefully they’re not going to say that word.  Hopefully….” And it’s like the last two minutes.  Yeah, “Yes!  I’ve almost made it to the finish!” and then they’re like, “Ahhhhh, but you know the only concern we have……” and you’re like, “Oh, god damn it!” It’s just irrational right?  Make it part of your pitch.  It’s not that hard.  Just accept and embrace reality. Very simple.

Just because the software tells you somebody opened your email, your job is not done. You’re not calling them to give them support and success. You still have to sell. I hear people all the time.”I call these people that opened the email and they’re like ‘Hey’, and I go ‘I saw you opened our email so I wanted to check in with you. Did you have any questions? How can we move this forward?’ and the other person says, ‘Well, I don’t know about any email.’”

Who cares, right? People, just because you send them an email and the software says they opened it, if you get a lot of people saying, “I don’t know, I’m just not interested, I didn’t see it,” or something else, how about embracing it? “Hey, you know, I sent you an email, and I wanted to see what you think about it.” Still, they reply, “Well, I haven’t seen any email.”  “I know! You get tons of emails, right? Listen, that’s why I wanted to be proactive and call you…”

Say, “Instead of sending you another 30 emails that you’re going to ignore and risk cluttering up your inbox, I thought we’d try to get clarity between the two of us.  Three minutes, three questions, and we’ll know if this is worth our time or not.” All of the sudden, you take their energy… it’s like jujitsu.  You take their energy to your advantage because you know every person swings at you. Don’t complain, just make it part of your interaction.

So, I’m a huge fan of short emails. I used to say, and still say, “the shortest way for me not to read your emails is to send me a long email.” That means you don’t respect my time, you don’t respect your time, you have no respect for yourself, for me, your family, your mother…

So, I’m not reading your email—I’m just going to ignore it. But, the long emails, if done right can also be super effective.  So, when you sign off or close or you get like that little email—super short—it’s like, “Hey, I’m your Account Manager, this is Kevin. If you ever need anything, let’s chat.”

Here’s the email that you get next….a few days, two or three days later–this thing. 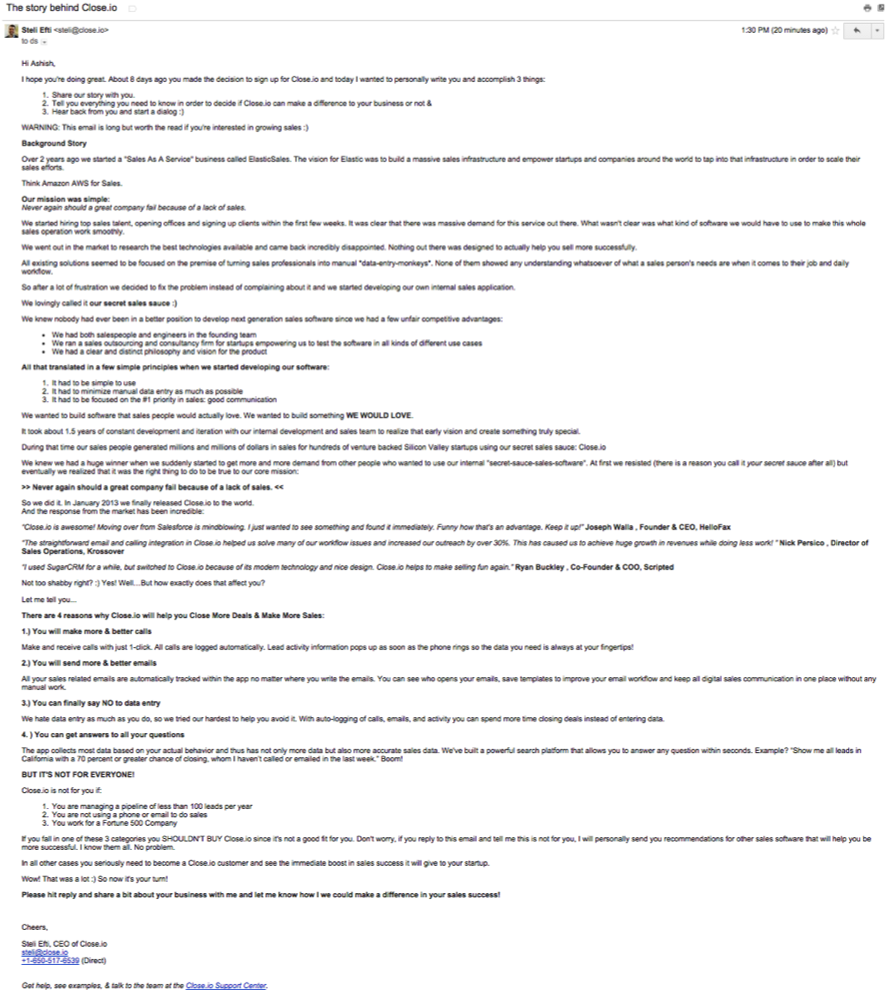 This is a monster.  Look at how long it is! I don’t know if you can see it from the back, but people in the front can see as little as you in the back.  There’s nothing to see it’s so tiny.  It’s a huge email—it comes from me. It’s our best performing email.  If you want to know more about long form sales letters, you know these marketing guys that sell you whatever—like “lose weight” or “change your life”  or something. Have you ever been on a site like that—it’s super long and you just scroll and scroll and scroll it goes on forever and you‘re like, “These guys don’t know anything about sales.” You’re wrong.  They’re awesome at this shit!  If you do the long email right, it kills. It’s just not that easy to do. Listen up, if you want that email, if you want anything— anything just shoot me an email.  I’ll share everything with you.

So moving along, you know the coolest thing about this email? It ends with disqualifying people. Now that they know the history of my country, my life story, and everything I know – Here’s the people who should not buy. Let me save you some time, if you’re one of these people, in one of these scenarios, please don’t buy this. Don’t waste your time, it’s not for you.

Do you know how many people send an email back to me, trying to argue with that point? “Steli, I know you said this is not for because of XYZ, but I think it is really for me because…” They start arguing. If you take something away from people, you make it very desirable to people. 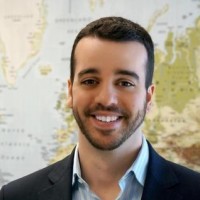 How To Close More Deals By Asking This ONE Powerful Question!