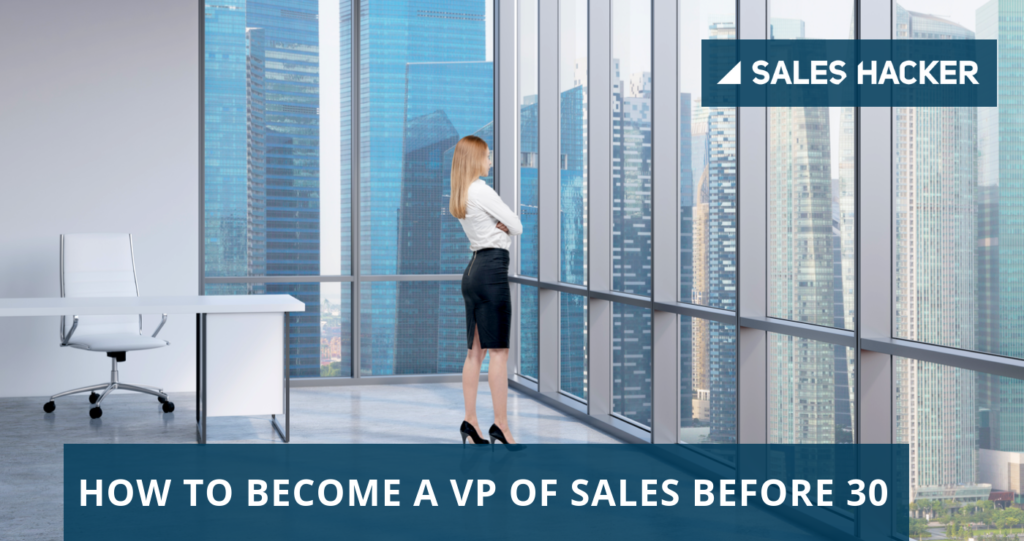 Have you ever wondered how to become a VP of Sales? I can tell you exactly how to do it, because I’ve lived this journey myself. By the time I was 30 years old, I was working at Oracle (via startup acquisition) helping them build the #1 performing SaaS sales team in my region. At the time, I had two years as a VP of Sales under my belt. And while there is no one perfect trajectory that a sales career follows, there are some key questions you should ask yourself before you start the journey.

How can you become a VP of Sales? Are you prepared to be in charge of the company’s most critical assets? Are you ready to hire and retain a sales team of the best and brightest? Can you spot sales performance issues before they blow up? Are you ready to create predictable revenue based solely on your leadership skills?

My answer to all of the above was ‘yes.’ I have achieved the dream many have of becoming a Sales VP by a 30-in fact before I was 30. I joined the ranks of Prime Point Media in 2006 selling national accounts, and by 2008 I had built the entire Midwest territory. A company called Dukky recruited me out of that job and is where I sold my first SaaS platform. It was there that I led the company to over $4MM in sales, a $35MM valuation, and earned my first title of Vice President of Sales. I had just turned 27 years old.

So how did I do it?  I’m 37 now.  However, if I could go back 10 years and give my 27-year-old self some career advice, I would point out some important actions that would help make the process a little more seamless.

RELATED: Here’s How to Hire a VP of Sales That Will Last Longer Than 19 Months

5 Essential Tips on How to Become a VP of Sales

A 2017 study revealed some scary numbers. Essentially, the results indicated that over 31 hours a month are spent in unproductive meetings, where you will find 91% immersed in a daydream and 39% falling asleep on and off. And that’s not even including those who are nursing a hangover-salespeople aren’t exactly known for quiet nights in.

Holding an ineffective “sales” meeting is, however, a great way to lose value for your company and help the CEO forget you are vying for a VP position.  Instead, hold a meeting that aligns and energizes the team, helping them to think strategically about how they approach their accounts.

Stay standing and keep it short

The best way I have found to make my sales meetings productive is by conducting meetings standing up. It may seem odd to some but it does help keep attention levels from dropping and attendees engaged and interested.

Some key characteristics are:

These meetings—while short—are packed full of information. We use a combination of project management style of software called Monday.com and Pipedrive which is a Kanban-style CRM to keep everyone on the same page. It is a visual, collaborative tool that helps keep us all organized on one board where everyone can see the exact status of where everyone else is at.

Related: A Day in the Life of The SVP of Sales

2. Get creative in your communications.

If you’re looking to become a VP of Sales at a young age, you have to find innovative ways to stand out and be noticed. Instead of doing the same old boring email or company meeting update no one listens to, I set myself apart by doing a weekly video, updating my boss on my progress and highlights. This weekly video built more trust and transparency and broke through the noise. I found that just sending a quick, simple video each week summarizing the weekly wins and opportunities was a small effort with a big payoff.

Think outside the same old inbox. Using video for internal communication is just one example of using a creative communication method to instill trust, promote transparency, and share insight to all levels of your organization. Don’t assume all video has to be a viral Youtube sensation to be a success.

A new Buyer Engagement survey found that 1 to 1 video is gaining traction as a sales communication tool. If video is not for you, think of other ways you could stand out and be creative: an infographic, a mini-podcast, an interpretive dance (ok, maybe not the last one…but you do you.)

Closers that focus, not fold

If I could turn the clock back in time, I would force myself to hire at least three excellent closers no matter where I was working. Three, because in my experience, one of those three won’t work out. It is essential that you do not settle for just any closer. The key is to look for someone who has overcome adversity and lived to tell about it.

The sales industry requires resilience and persistence—someone with a thick skin. A master closer is someone who comes back stronger after every obstacle. Someone who controls their thoughts and beliefs with a strong mindset. This mindset is what allows them to succeed while others fail. A leader is only as strong as his team. Without closers, your own executive career in sales can’t really take off.

“Hustle is relentlessly pursuing what needs to be done at the time.” – Dan Norris, Entrepreneur

There’s a lot of bullshit out there in regards to what it means to hustle. Sports offers the best analogy. In sports, hustle means doing the only thing you could think about at that exact time to beat the person with whom you are competing. Sales is the same thing.

To be a successful sales executive at a young age, you must be determined to succeed and always demonstrate self-control. You should be forward-looking, maintain a positive outlook, and have a world-class hustle.

I have hustled my entire career hustling is also about breaking through the noise to get to the accounts that truly matter. I have used multiple marketing techniques during my rise through leadership to get my foot in the door. For instance, early on in my career, I sent an empty Manolo Blahnik shoebox to the CMO of a major New York City insurance company. I included a note that indicated the ROI I would create for the company would allow her to buy at least ten pairs of Manolos. My effort was enough to land me a phone call from the CMO herself.

Another time I went to Macy’s and bought some cheap wallets and filled them with fake plastic credit cards. I sent them via FedEx to my chosen target audience of Marketing VP’s and included a business card with each. Surprisingly I got about a 50% response rate giving me compliments on my creativity.

Yes, I could have just done a bunch of cold calls and called it a day, but I chose to laser-focus and pool my energy into the account that matters most–that’s hustle.

RELATED: Sales in 2018 is Different: This is How You Should Adapt

I know I said I had five tips, but as a hustler, of course, I will give you one extra piece of advice. As an executive, you must fight for the right technologies for your sales team. Technology used to be a capital expense. It’s now a necessity that will literally make or break your culture. If they’re using shit that bogs your reps down, then they will spend half their day doing admin work.

Hint: If you don’t have at least $1 million per year to spend on proper Salesforce CRM development and customization then you shouldn’t be using it. Now, you’re paying sales reps to spend half their time customizing it for themselves.

A great VP of Sales leads their teams to achieve aggressive goals. I don’t think anyone is going to deny businesses are getting increasingly dependent on technology. Well, technology also has a huge impact on sales and the sales team. In fact, a huge issue with today’s sales reps is they are spending way too much time on non-essential tasks and not enough time doing what they were hired to do: selling.

The Mystery of the Missing Sales Numbers

Recently, I was working with a CEO who couldn’t figure out why his sales numbers were off by around $100k each month.  I regretfully informed him that he was lucky. In fact, he was lucky that they were not off by more like a million, given what I suspected the problem to be.  From there, I recorded exactly how the sales reps were entering their data into Salesforce and sure enough, the reps were entering data about the speed of a snail with an average of 31 clicks. Assuming the average click is 5 seconds of one’s day, then that’s 155 seconds or nearly 3 minutes of data entry per contact! That’s entirely too much data entry work.

Have you ever tried to kickbox someone? How about jump rope? Or really anything requiring physical exertion for three minutes straight? It’s exhausting and tries your mental focus. Now, try doing that same exercise 40 times in one day. That’s 40% of the sales reps time spent on data entry. I can personally attest to the radical transformation technology can have on a company starting with the prospecting process all the way to the close.

Once you become a VP of Sales, you must be consistent. This means being consistent when it comes to technological tools. The sales reps are the ones driving revenue. If you aim to be their VP, then it is your responsibility to figure out how technology can be used in the most optimal way.

Conclusion: Becoming a VP of Sales is an Honor and Awesome Responsibility

I hope you have enjoyed my overview of how to become a VP of Sales.  I have learned many lessons in the past ten years. Some have been gradual realizations. Others came at a painful price. One thing I can say for sure is everything happens for a reason and without pain, you never grow.

Most importantly, becoming the VP of Sales is a huge responsibility. There is no perfect road to getting there. My advice is to stop wasting time and let technology start doing the work for you. Always work hard to cultivate solid relationships. And above all, you are about to become the second-most important person in the company. Revenue depends on your talent at keeping the talent. Tread carefully and respectfully and be grateful every day for the awesome responsibility you’ve been given.