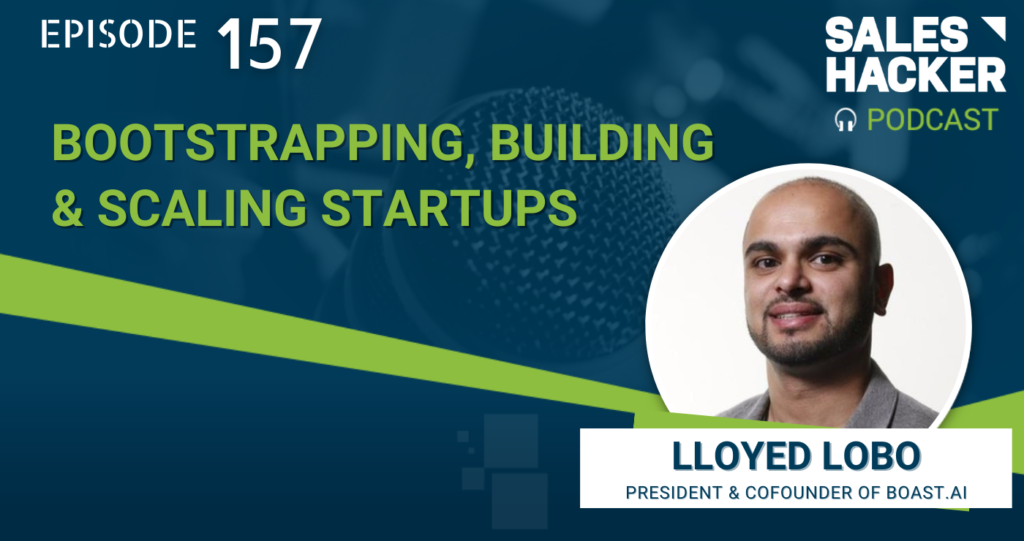 This week on the Sales Hacker podcast, we speak with Lloyed Lobo, Cofounder at Boast.AI.

Boast.AI automates access to billions in R&D tax credits and innovation incentives so companies can fuel their growth while preserving equity and avoiding red tape. Lloyed also co-chairs Traction, a community that brings leaders from the fastest growing companies together to share insights into building and scaling startups via weekly webinars, regular meetups, and an annual conference.

We hear about Lloyd’s extensive entrepreneurial background and the powerful lessons he has learned along the way.

If you missed episode 156, check it out here: How to Sell Without Ego with Michael Hanson

Sam Jacobs: Hey everybody, it’s Sam Jacobs. And before jumping into what you’re about to listen to, I’d be remiss not to tell you about Unleash 2021.

On May 11th through 13th, we’re focusing on how to win all together in the new sales era. You’ll learn new go-to-market strategies, get deeper funnel insights and actionable takeaways for your entire organization from revenue leaders at high-growth startups and Fortune 500 companies. And our very special guests are none other than Guy Raz, podcaster and author of How I Built This, and Carey Lohrenz, the first female fighter pilot in the U.S. Navy. Come save your seat for this high-energy online event at Unleash.Otreach.io.

Now, on to my conversation with Lloyed Lobo.

Sam Jacobs: What does Boast do? And talk a little bit about the space that you’re operating in.

The problem is, it’s a cumbersome process. You’ve got to wait for the end of your tax year to apply. You need to look back on the year and identify all the projects and the work you did that meets this narrow criteria for these tax credits, and then you’ve got to put together all the documentation and paperwork.

So one, it’s cumbersome to apply. Two, it’s prone to frustrating audits. And then the last thing is it takes a long time to get the money.

Our mission is to democratize access to these tax credits, to help people get more money faster for less time and risk..

Sam Jacobs: How old is the company?

Lloyed Lobo: So we started the company many moons ago in late 2011, early 2012. But we started as a consulting firm. My co-founder who I studied engineering with, did a software startup that failed, felt he needed to study accounting and ended up at a Big Four accounting firm in their R&D tax group, and he said this process is manual.

And then I went off and did Speakeasy as well. And then after Speakeasy failed, end of 2016, took two months break and then we rebranded Boast from Boast capital to Boast AI software vision, and then grew from like whatever, sub one million revenue back then to over eight figures in three years.

Sam Jacobs: What did Speakeasy do? It’s a good name for a startup. I’m sorry it didn’t work out but I’m interested in the concept.

Lloyed Lobo: What Speakeasy was, is an intelligent calling tool for salespeople. And the premise there was, salespeople, they don’t update the CRM because your CRM activities are not sales activities.

So what we said was, “What if we bring the grunt work into the selling activity and we do it?”

Sam Jacobs: What’s your background? Where did you grow up and how did you get the bug to start businesses?

Lloyed Lobo: I was born and raised in Kuwait. My parents are from India, they were working there. I was a refugee of the Gulf War. After a while, I made my way to Canada, studied engineering. And then my girlfriend at the time, now my wife, she got into med school in the U.S. So I just chased her and moved to the U.S. after I finished engineering.

And so my first job was in product in New Jersey and then I worked in sales and marketing in Philly, I worked at another startup in sales and marketing. And then after that, Alex, my co-founder CEO at Boast, he called me and he’s like, “Hey, we should start a company. I don’t know what, but we have a few ideas. We’ll start this one in the test, whether space and we riffed on a few things together.”

I like to consider myself like a pioneer-mentality person. I like to get it from, to a point where it’s product market fit and then hand it off to somebody to steer.

Sam Jacobs: What do you attribute that appetite for risk to?

Lloyed Lobo: I think it’s just in my DNA. I was always doing crazy things growing up.

All my life I’ve been more drawn towards creating new things. And I’m just not interested in looking at things the way they’re done and trying to scale them.

Sam Jacobs: Talk about the different phases of evolution.

And the other fundamental belief is focus on your customer and let that be your primary guide. All your decisions should flow through that. If you don’t have your ideal customer profile, it’s very hard to build a business. At least when you’re starting out, that’s very important.

Raising Money at the Right Time for the Right Reasons [19:58]

Sam Jacobs: Why did you raise money?

Lloyed Lobo: I think the timing was right. The market was heating up, with the pandemic, everyone needed money. And we had gotten to eight figures in revenue with four salespeople, no marketer in one big community, a small dev team, mostly customer success center operations. So we’re like, “Now is the time.” If you don’t have money, you won’t innovate because you’ve got to feed yourself also.

So we said, “If we take money, we’ll be relaxed and we can grow the business.” When I say relaxed, meaning personally, you know, now there’s one stress off your head, meaning putting food on the table. So now you can invest in the company and grow it.

Sam Jacobs: I think it’s interesting what you just said. There are some founders or some investors that worry that, if you take too much of that and put it into your personal bank account, that you will be less incentivized.

But my perspective is that you’ll probably be more incentivized because you view the business less personally. And so you can make longer term, more strategic decisions without worrying that you’re jeopardizing your nest egg. What’s your thought?

Lloyed Lobo: If founders today tell you that they’re not taking even a small portion of the table, like at a post A stage, they’re lying. Right now the VC pitch to founders and the post A world is just that, “Hey, and we’ll let you take money off the table so you can de-risk yourself a little bit.” Right?

I think the theme here is you need to eat as founders, especially when you’re bootstrapping. You’ve starved and not eaten and you’ve taken jobs on the side and whatnot to run the business. You’ve not taken the market rate. If you can pay yourself and have a comfortable life personally, then you’ll do well professionally.

Sam Jacobs: Lloyed, we’re almost at the end of our time together and what we’d like to do in this very last section is sort of pay it forward and hear about people, ideas, content that have deeply influenced you. What comes to mind for you?

Lloyed Lobo: I think learning is one of the most important things in life. And the second thing is being open, right? I think openness is the single most indispensable enabler of growth.

The issue is I hate reading and I don’t know who will empathize with me in the audience here, but everyone talks about books and books and read a hundred books. And I feel miserable every time I hear that because I hate reading, man. I just hate reading.

Lloyed Lobo: Yeah, every time I hear that from people, like recommendations, how to be successful, but I came up with a hack for it.

Sam Jacobs: Good. I want to hear it.

Lloyed Lobo: And my hack is, every week I interview two smart people that I respect a lot for an hour like this. And then I edit the video myself and post it on our YouTube channel. And I learn a lot just by asking questions like this to people. And I think that’s been a great hack for me for the last few years in terms of learning.

I think just a lot of people are shy. They feel like if they ask people for help or advice, they’re troubling them. I see immense value in cold emailing people. We built this huge network just from cold emailing. The first Traction conference we did, I cold emailed all the speakers. And then used the social proof of those who are interested to follow up with the ones that are not. And then one shoe drops and the rest follows. Right?

And so it’s the power of asking. Give and also ask for help when you need it. I think that’s really important. So if anyone messages me, I respond to almost all my emails. People message me on LinkedIn and I respond. It might take time if the volume is high, but I do respond and I try to be thoughtful in the answers I provide.

Sam Jacobs: And that’s a natural segue. What is your contact information if people want to reach out or learn more or maybe become a customer?

Lloyed Lobo: It’s Lloyed@boast.ai and you can also look me up on LinkedIn and I’m there.

Great conversation with Lloyed Lobo. Really love it. Just talking to people that think broadly, metaphorically, conceptually, that have experienced doing things that have failed and risen back up. And Lloyed’s a perfect example.

Also, the self-awareness, Lloyed brings a lot of self-awareness to the conversation, talking about how some people are pioneers and some people are settlers. There are benefits and disadvantages to each. I don’t want you out there to think that settlers is necessarily a pejorative because frankly pioneers are the people that die much more frequently. They get all kinds of terrible diseases on their way to California and to the west from the east.

So being a pioneer isn’t always the best, you take on more risk and you risk more as a consequence, but when it pays off, it pays off big. And Lloyed is a shining example of somebody that helped build a bootstrap company and then took money when it was the right time to take money and accelerate into growth. So I really loved that conversation.

Now, before we go, thanks again to our sponsor, Outreach. Outreach is the number one sales engagement platform, and you can learn all about them at Outreach.io.

A couple of other things, if you haven’t signed up for Unleash, think about it. May 11th through 13th, we’re focusing on how to win altogether in a sales era, very special guests, including Guy Raz and Carey Lohrenz, go to Unleash.Outreach.io for more information.

If you want to reach out to me, you can, sam@revenuecollective.com is my email address or linkedin.com/in/SamFJacobs. Okay? Really good talking to everybody today and I’ll talk to you next time. God bless you.