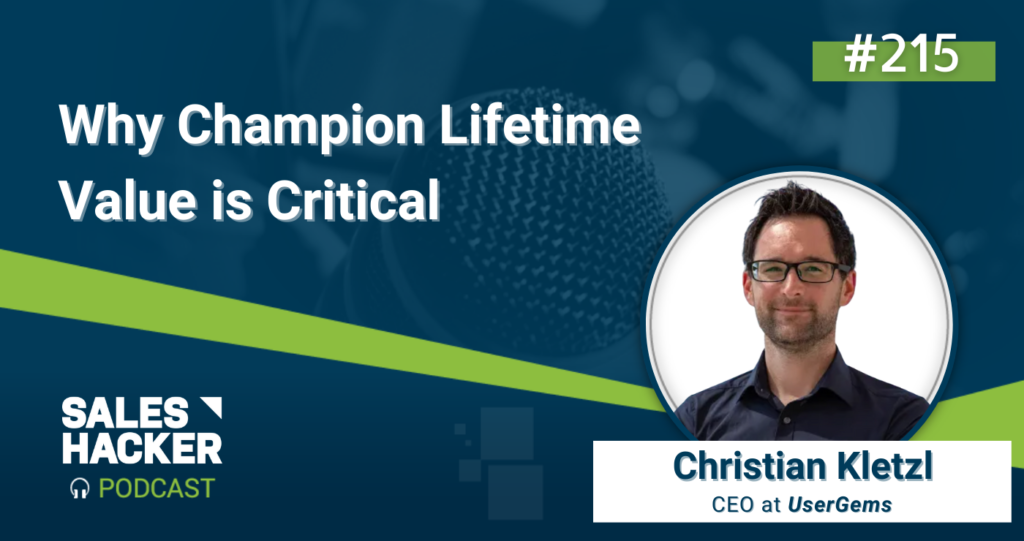 In this episode of the Sales Hacker Podcast, we have Christian Kletzl, CEO and Co-Founder, UserGems, a fully-automated, AI-powered rev gen pipeline. Join us for an energetic conversation about champions and their lifetime value.

If you missed episode 214, check it out here: Flockjay Has the Cheat Code For a Successful Team with Shaan Hathiramani

Sam Jacobs: Hey everybody. Welcome to the sales hacker Podcast. Today on the show we’ve got Christian Kletzl; Christian is the CEO and co-founder of UserGems, really, really cool company that’s focused on pipeline generation by helping you track your champions as they move from job to job to job so that when your champion leaves one company, you know it’s a churn risk. And when they joined another company now it’s a purchasing opportunity.

First, we’re going to hear from our sponsors.

This episode of the Sales Hacker podcast is brought to you by Varicent. High performing revenue organizations have a plan for growth. Learn how Varicent can help you create a predictable growth engine at varicent.com/saleshacker.

Without further ado, let’s listen to my conversation with Christian Kletzl

Sam Jacobs: UserGems, tell us in your words, what do you do? Give us a little bit of the pitch

Christian Kletzl: UserGems, we help you find the buyers that matter most to you. And really the idea is that as a company, you already have users, you already have buyers, you have people that love the product. But in this current economy and the previous one, these people change their job all the time. So what we do is we track those people for the job changes. And we let you know who left because that actually can create a churn risk. But we also let you know where they went to. And then you can sell to them again. And we are seeing that this play generates much, much higher response rates and ultimately generates a lot of new business for companies.

Sam Jacobs: That sounds very, very useful. Tell us a little bit about the origin of the company. How did you get the idea for it?

Christian Kletzl: I’m an identical twin, and together with my twin brother, we started the company in 2013. And we’ve been working on different startups ever since and have pivoted a few times. But to come back to your question: We were running a company called Smart Hires. And it was a candidate sharing network between like-minded companies. And we noticed that one of our customers changed their job. And we tracked him down, turned them into a customer again, and we thought, ‘Hey, this is really easy.’ And then we said, ‘Hey, maybe we can program this for us, locked ourselves to the Austrian Alps, and developed a prototype of this. And this prototype we then told other companies about and they were much more interested in this version, in this new product that we’re having, than the existing one. And that’s when we decided to completely switch to that.

Lessons learned from building a company & running a startup [05:33]

Sam Jacobs: Talk to us about some of the lessons that you’ve learned because you’ve been working on one form of this company or another for close to 10 years. It’ll be 10 years next year, nine years now. What have you learned in terms of the biggest lessons from building companies and running startups?

Christian Kletzl: I think the biggest one is really knowing when to give up, but also knowing when not to give up. When we were working in startups that didn’t work. I was always reminded of Airbnb: They talked about the 1000 days of pain. So it took them 1000 days where there was no growth at all until they did something right. And then the growth accelerated. And I think this is always the reminder — that so many of the things actually take time. So often, I remember myself being super excited ‘Okay, this is it. This is phenomenal.’ And then the market response was like, meh, and then you change things. But the important thing is, when are you so close that changing can help? And when is it actually so far off that it’s better to just stop doing it and to do something completely different?

Sam Jacobs: How do you think about capital efficiency and cash flow management as you’re working towards Product Market Fit versus when it feels like you’ve already grown into your most recent valuation — things must be going really well?

Christian Kletzl: These were probably painful lessons. But we’ve always been very capital efficient, because we had to. There was no other option for us. So it was always: How little money can we spend on giving this a try. And I feel like this actually helped us quite a bit; even now that we are well capitalized, we still have that mindset, and we’re still not spending. And I think that lesson, actually once again became very valuable in the last few months where now capital dries out.

Sam Jacobs: You’ve mentioned it’s time to bring out the wartime CEO, which I would imagine is a Ben Horowitz reference, but tell us how you think about that relative to a peacetime CEO.

Christian Kletzl: In a peacetime, it seems like you have more time and actions aren’t as critical. Like there’s so many companies that can buy from you. There’s so many actions that you can be doing and you’re still going to be successful. Like everyone, in a boom time, everyone looks like a genius. In the recession time we’re in right now, I think everyone must be much more deliberate, you must act much faster. It’s much more focused on the various essentials in product development in selling so that everything we develop, we develop quicker.

Sam Jacobs: Champion lifetime value, talk about what that means and why it’s so important.

Sam Jacobs: One of the things that you’ve said is: Hey, if you’re not ashamed, you launched too late. Tell us a little bit about what you mean there.

Christian Kletzl: You always want to get feedback from the market. So the earlier you can go out to the market and get the feedback, the better it is for product development. The problem is everyone in retrospect says, ‘I should have launched earlier.’ And if you’re not ashamed, then you actually launch too late. And this means, if you waited until you actually had a decent product, then you waited too long to get the feedback from the market. This is always advice given and I think this is always advice that I’ve never seen being implemented. Because if your product is launched too early, it can be that the product is so bad that you actually are not getting good advice.

Sam Jacobs: Any skills that you find are underdeveloped in you that you think you need to improve upon, or parts of the job description that surprised you that you’re working on?

Christian Kletzl: In every stage of the growth of the company, I’m expected to do different things. I was the first developer, then I was the first sales person, and now managing a sales team or managing a customer success team. And I think the hardest part for me is actually letting go of these tasks that I did in the previous face of the company. And so I always need to reevaluate the things that I’m doing: Are these actually the things that I should be doing? Or is there someone else in the team that maybe can do even better than I can?

Sam Jacobs: We like to pay it forward to understand who the people are that have influenced you that you think we should know about — any particularly big influences?

Christian Kletzl: The founder of OpenTable, Chuck Templeton, who took a chance, a risk, on us and helped us figure out how do you actually run a startup and what do we actually need to do.

At every stage there was YC, were a lot of the partners that helped us in developing this new product, the new tool, developing ourselves; and then even going as far as to say, our first customers.

Sam Jacobs: Hey, everybody. Sam’s corner. I really liked that conversation with Christian klutz. He’s an introvert that was braving the podcast world, I think he did a great job. And he’s really built a really cool company. Because it’s so true. Everybody has been in that situation where your buyer, your champion, leaves the company, all of a sudden, there is a major churn risk: Where did they go? Let’s make sure we find them wherever they go, so that we can sell them something, hopefully, again.

And it also speaks to this notion of, as Christian mentioned, the consumerization of the B2B enterprise world, of thinking of individuals as part of the gestalt as opposed to thinking of the entire organism as a “company”.

And then this concept of champion LTV: What’s the lifetime value of a person that loves what you do if they go from company to company to company constantly purchasing your product, and there’s so many people that are so excited to be one of those people.

Reach me at sam@joinpavilion.com and I’ll talk to you next time

What it Takes to Lead 1,200-Person Company like ZoomInfo with Tim Strickland