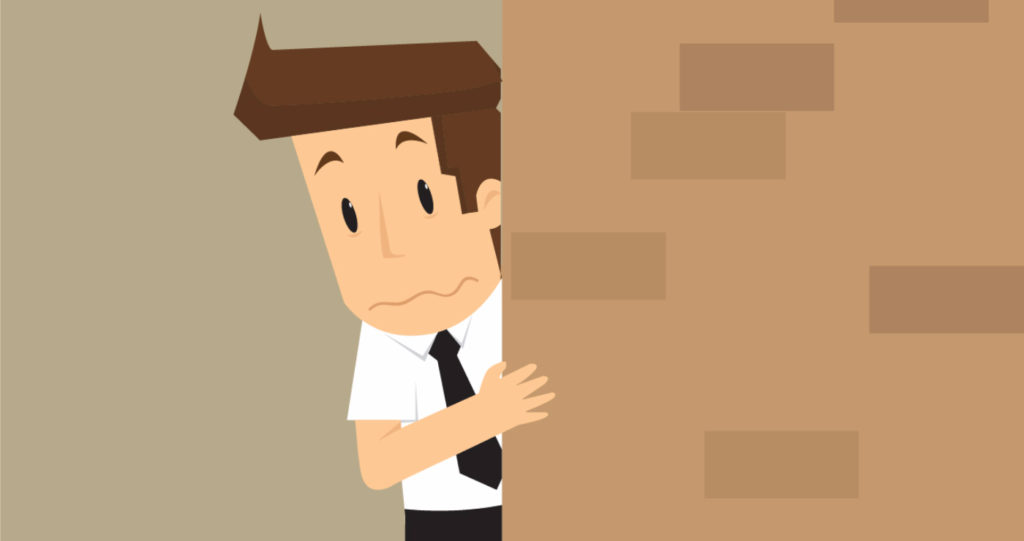 Boom. Perfect demo. Your pitch is flawless. All things are going accordingly. You’re discussing pricing plans with a huge customer without running into any objections. Both parties have agreed upon the next steps. You’re on cloud nine and about to close a huge deal to look like a superstar in front of the whole organization.

You hang up the call, send over a proposal, and start high-fiving your colleagues. What could go wrong?

And then all of a sudden, days go by without any word from the prospect. You’re tracking the email you last sent and see that it’s been opened 20+ times…

It’s also the end of the month… Your manager is asking what’s going on with the deal and you keep repeating, “I got it, I got it!” But in your head, you’re absolutely freaking out, like when you throw a Pokeball at that damn Pidgey but he keeps escaping. Agghhhhh.

“Where the hell is this prospect?” you ask yourself. Days turn into weeks. Weeks turn into months. Finally, you have no other choice but to mark it as Closed Lost in Salesforce and you’re absolutely confused about what the hell just happened.

On the other hand, how many sales managers are tired of seeing good deals get marked as Closed Lost due to the sales rep’s lack of following up (and “checking-in” doesn’t count either)? Sometimes even the best sales reps don’t fully find out the prospect’s reasons for moving on, or they end up telling you that the prospect “just stopped responding.”

As a sales manager, we’ve all been there. You receive a notification that a deal has been marked as lost… you click into the details of the Opportunity… and you see Closed Lost reason as ‘Went Dark’.

After digging a little further, you ask the rep for details and they say that the prospect just wouldn’t get back to you no matter how hard they tried. You’re thinking, the first meeting went REALLY well, what do you mean they just haven’t responded? You decide to click into the Salesforce Activity section to find one of these scenarios:

You look at the email that the rep sent out to find something that looks a little like this:

Just wanted to check-in. I know we discussed that the platform would be great for you and you’d be getting back to me shortly after talking with your finance team.

I’ve sent you a gazillion emails and haven’t heard back! 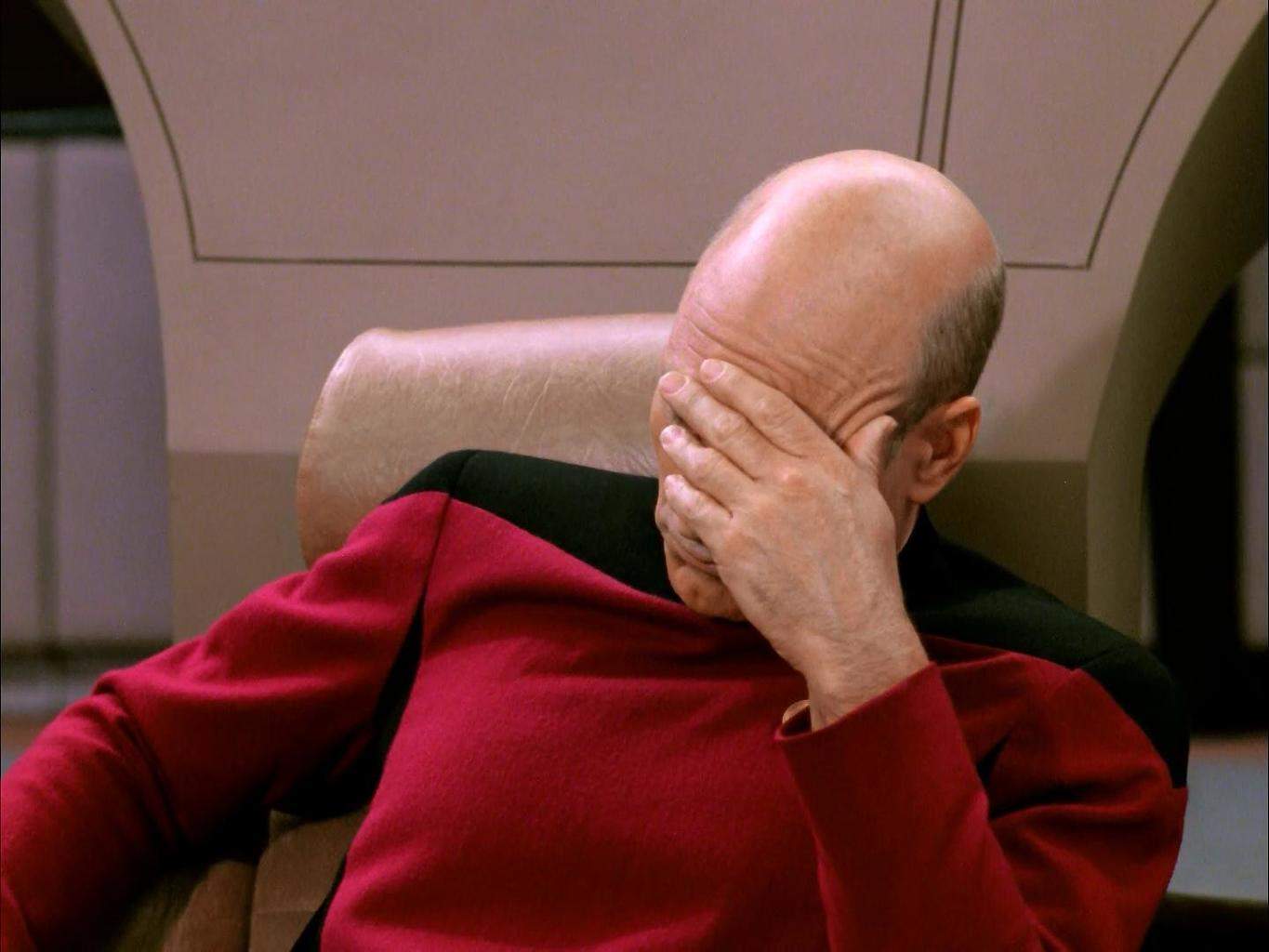 If you’ve sent out emails with those subject lines ever, please check out the following post by John Barrows to find out more about how to cure the plague of just “checking in.”

I’ve been in both situations mentioned above (happens to all of us and you have to start somewhere) and wanted to share a story of a prospect that was finally won over after 4 long months of consistent follow-ups and multiple communication attempts.

For DigitalOcean, this is a company that fits the Ideal Customer Profile and the first email I sent was on February 18th. After several conversations and 70+ email exchanges back and forth, patience, strategy, and teamwork prevailed. On June 29th, we finally moved this opportunity across the finish line to have them start using DigitalOcean’s services.

Below you’ll get more context on the prospect, play-by-plays from conversations, and key learnings on 1) how to manage multiple stakeholders 2) knowing when to walk away and 3) never following-up with “just checking in” and 4) how to provide value with each follow-up to elicit a response from the prospect.

Sales Cycle: 4 Months (not including initial time to move into proof of concept with their internal development team, migration time for production workloads, etc)

I reached out to Arnold (the CTO) and he replied mentioning that he had heard really great things about DigitalOcean before copying Adam (their Head of Infrastructure). The CTO deferred me to the Head of Infrastructure and used the exact phrase “in charge of” and not something like “oversees” or “handles on a day-to-day.”

This immediately tells me that Adam (Head of Infrastructure) should be my main point of contact and Arnold (CTO) can be my champion because of his positive response with “DO has a very positive presence on platforms like HackerNews.” 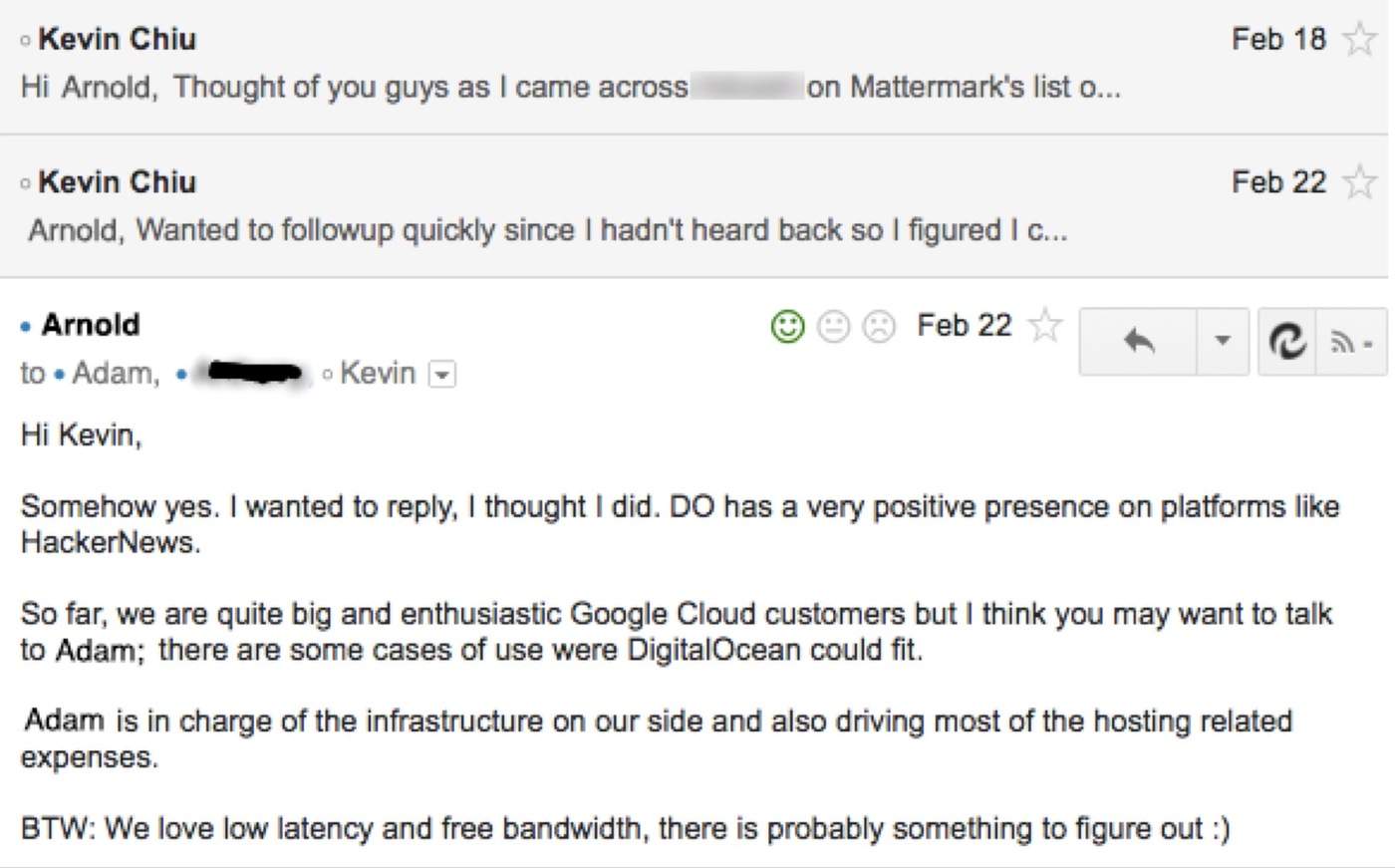 Adam (Head of Infrastructure) got back to me after a few days and scheduled a meeting about a week out. He then postponed it, only to ultimately reschedule it again a few weeks later. Adam told me that his COO (a new decision maker), will reach out to me in ~2 weeks. Great, sounds promising. 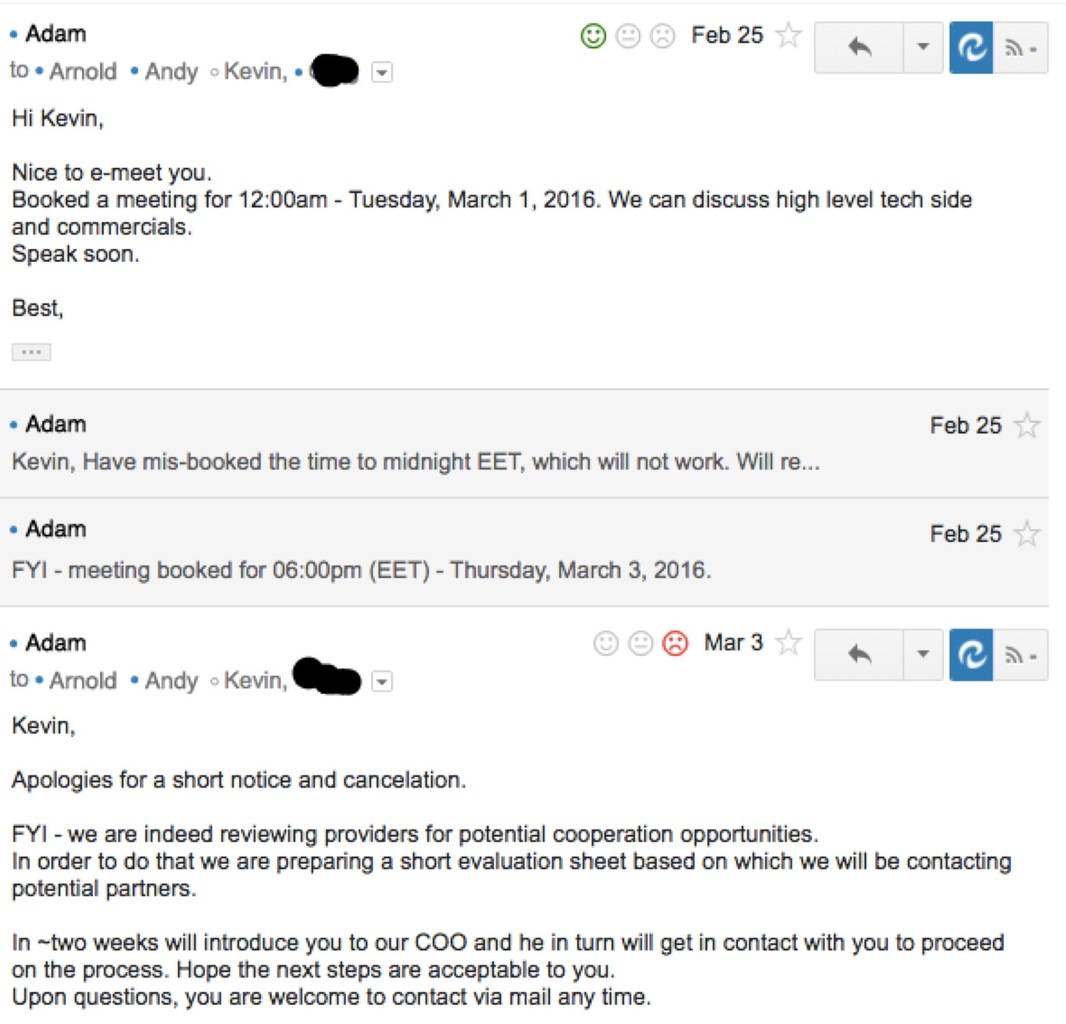 But about a week and half goes by and I didn’t hear back. Rather than sit around and wait, I decided to be proactive by going on LinkedIn. I figured out who the COO was, and sent him the following message: 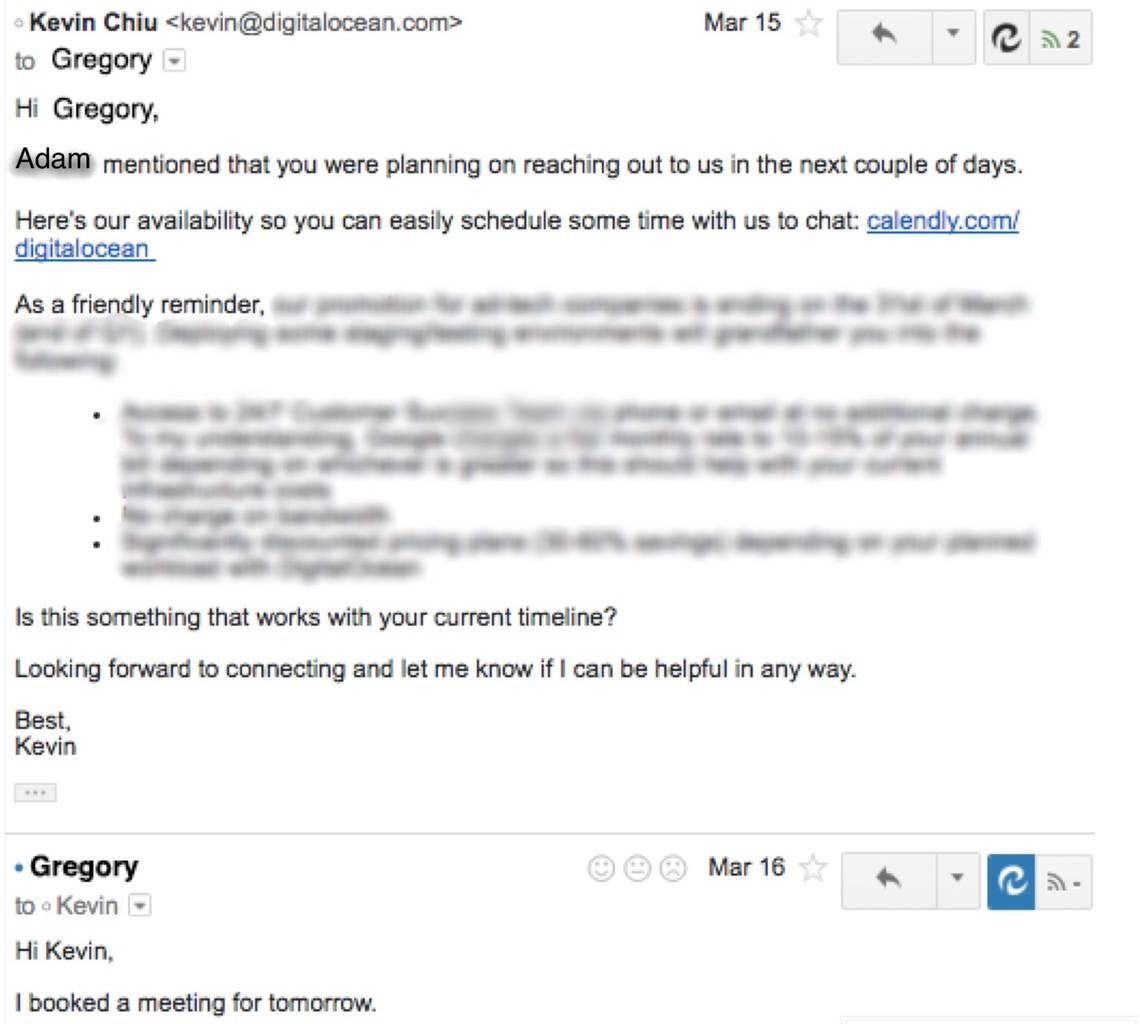 We had an amazing demo with a prospect, established pain points, obtained a mutual understanding of value propositions by both parties, and confirmed next steps. Gregory (COO) asks for some feedback on questions and cost within 2 minutes of ending the call: 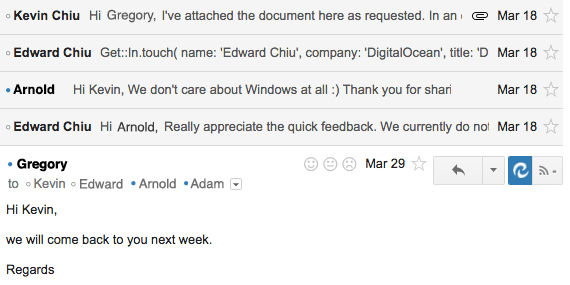 to only find out that I wouldn’t end up hearing back until the end of the month, which happens to be the end of the quarter. We filled out a 3-page spreadsheet early before the prospect’s requested deadline to only receive back a short, one sentence that things were getting pushed back another week. Welcome to sales 🙂

A week goes by and we heard nothing. At this point, I wasn’t surprised so I sent them two options: 1) Pick a time that they’re available from the following options or 2) Use my Calendly link for easy booking. 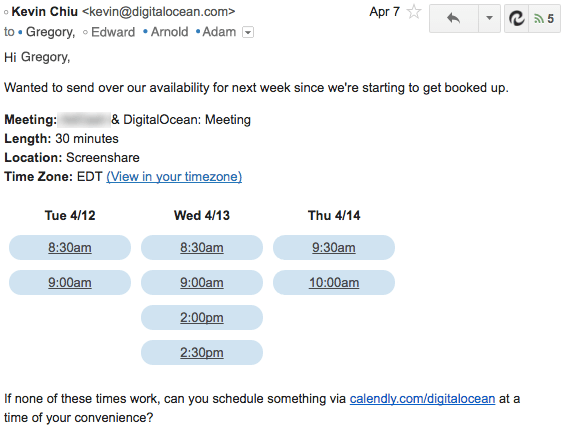 At this point, you have to start considering other options and you shouldn’t feel bad about it either. You’ve built a strong relationship; you’ve done a decent amount of work; and you’ve earned the right to attempt to reach out through a different channel.

LinkedIn? Call? Text? Skype? Well, there’s no LinkedIn photo and a barely filled out profile so let’s assume that he’s not very active. This company is located in another country so the time zones are completely off, so phone isn’t the best option either.

Text? Definitely don’t have his mobile yet, but I’ve seen some awesome software that lets you send texts directly from Salesforce and/or even schedule those text messages to be sent out at a specific time.

And Skype? This is actually a good option for us since we’re selling to the developer market. No Skype in his signature though, so back to a good ol’ fashioned email.

I reached out with something other than “just checking in” or “touching base.” I was sure to mention two things 1) a congratulations on recent news and 2) recent news on our own company. If you’re using LinkedIn Sales Navigator or something like Owler, you’ll be able to get automated news alerts on your tier 1 accounts to optimize your account based sales process. You won’t have to manually do research every time you want to reach back out to a prospect. 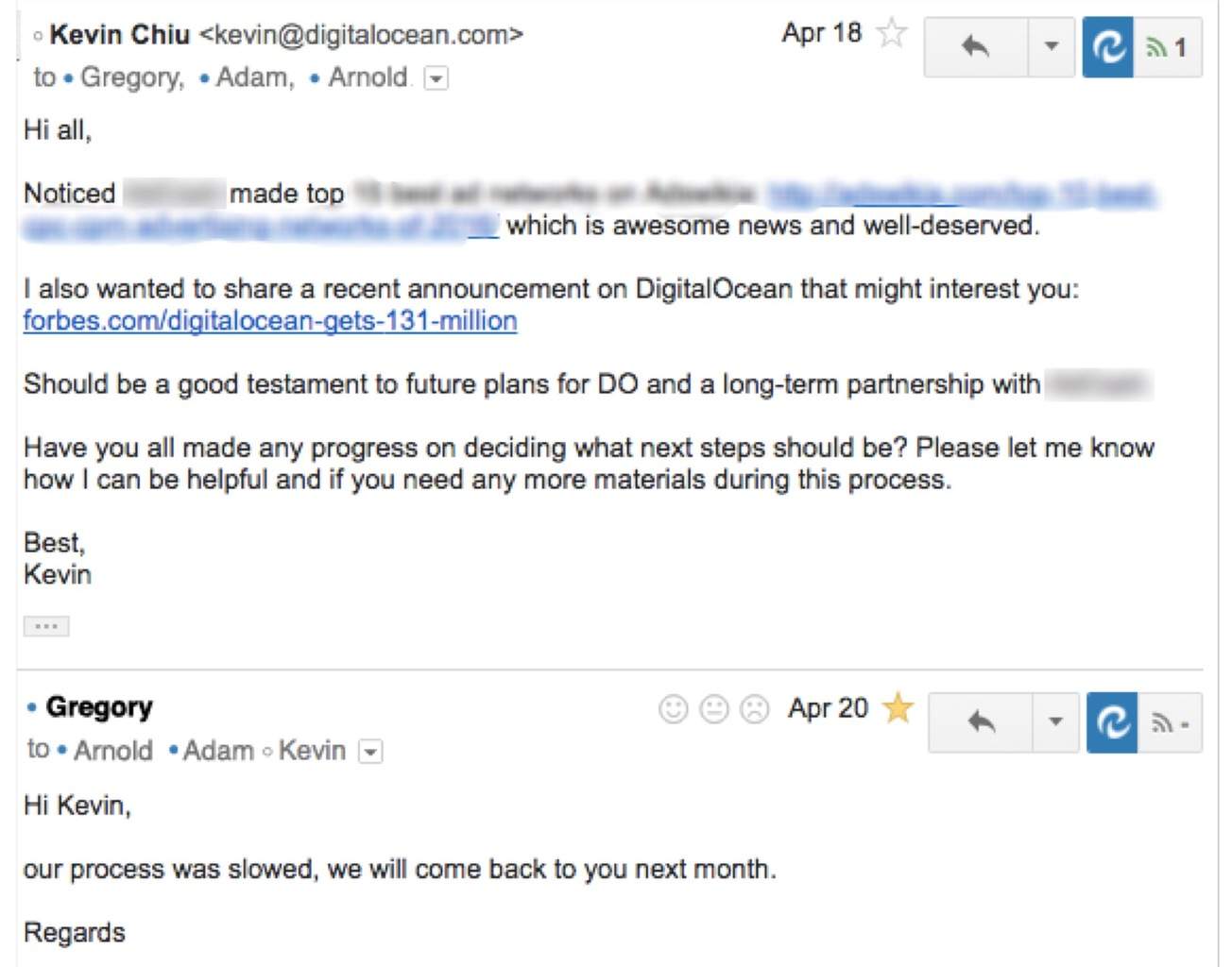 “We’ll come back to you next month,” said Gregory.

“Another delay?” I thought to myself, discouraged. It had been two months since we first got the company engaged and one month since the first demo. The responses hadn’t been very promising. It wouldn’t be unusual for some sales reps to get discouraged or mark the deal as Closed Lost.

Rather than sending the prospect another article, I decided to go with the good ol’ saying: “never lose a deal alone.” Don’t be afraid to ask for help; bring in your sales manager or VP, or in this case, your CEO.

Immediately after I sent this out, the COO responded with the intention to continue the conversations where we had left off.

I approached this deal a bit more strategically since there had been roadblocks to getting him back on the phone. I needed my champion back on board. I sent the CTO a separate email asking him if he’d like to join the call along with the other Head of Infrastructure.

The COO and I clearly weren’t best friends at this point. I wanted to have more stakeholders in the room in order to control the outcome as best as possible. I ended up getting this from the CTO: 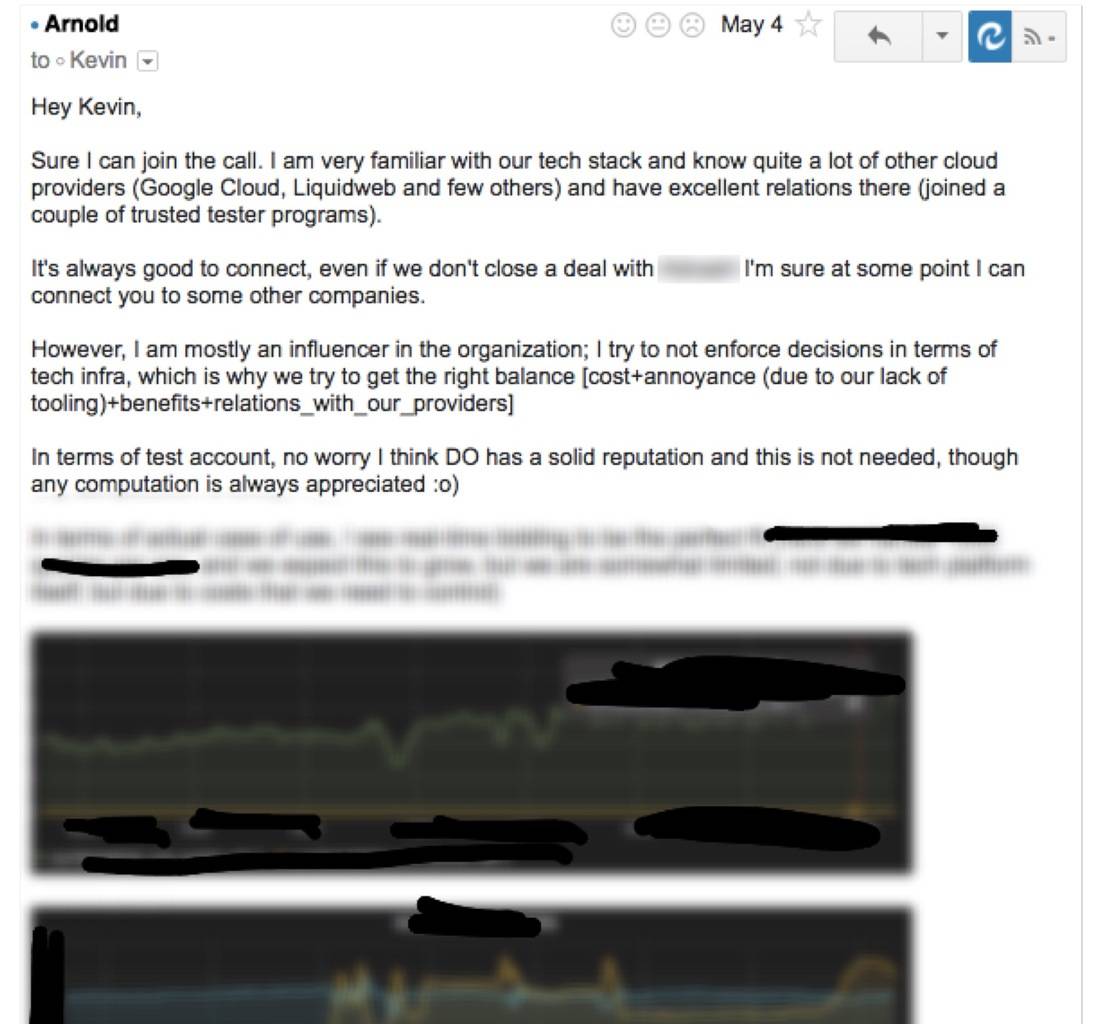 There it was, my golden ticket. All because I decided to reach out to the champion to get him back into the mix. I got confirmation that he’ll not only give us information on how to close this deal (which the COO did not want to share), but also give us the bonus of customer referrals.

Coincidentally, the swag box that I had sent over the weekend showed up the same day. They were extremely stoked about that and the conversation, so I obviously moved the deal into the Closing stage! 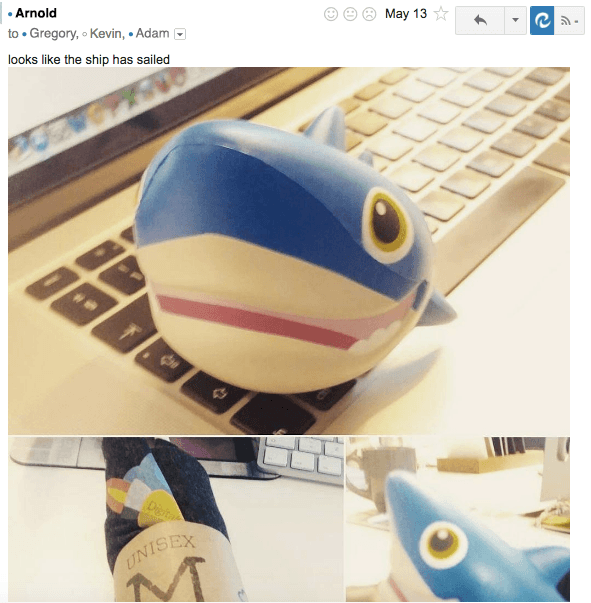 Of course, a week goes by with no response from anyone on their team. Then I get this email from the COO:

Disappointed, I continued to follow-up a few more times (while still providing value or having a reason to reach out). After no response over and over again, I felt discouraged and considered calling it quits. As one last shot, I decided to figure out what was going on again with my champion. I sent him a note after his vacation asking if he could get me the inside scoop on what was going on internally to give me insight into what I should do next. 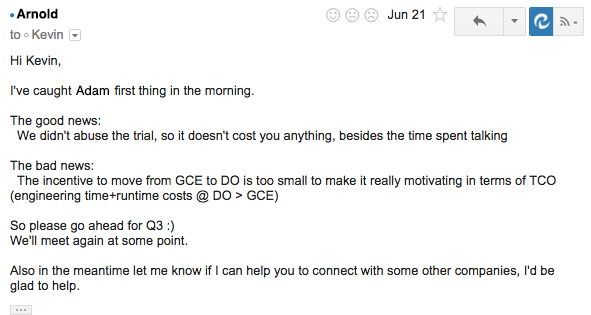 Now I knew exactly why they went dark and with Arnold’s permission, I decided to send one more Hail Mary message to the Head of Infrastructure and the COO…

Moments later, they responded back…

saying that our latest offer worked for them and we’d start implementation next week. After 4 months of hard work, we finally got the ball moving forward.

Thanks for reading everyone. I hope you found a few golden nuggets in there. Please feel free to ping me directly if you have any questions or leave your comments below. 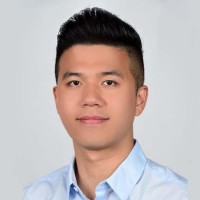