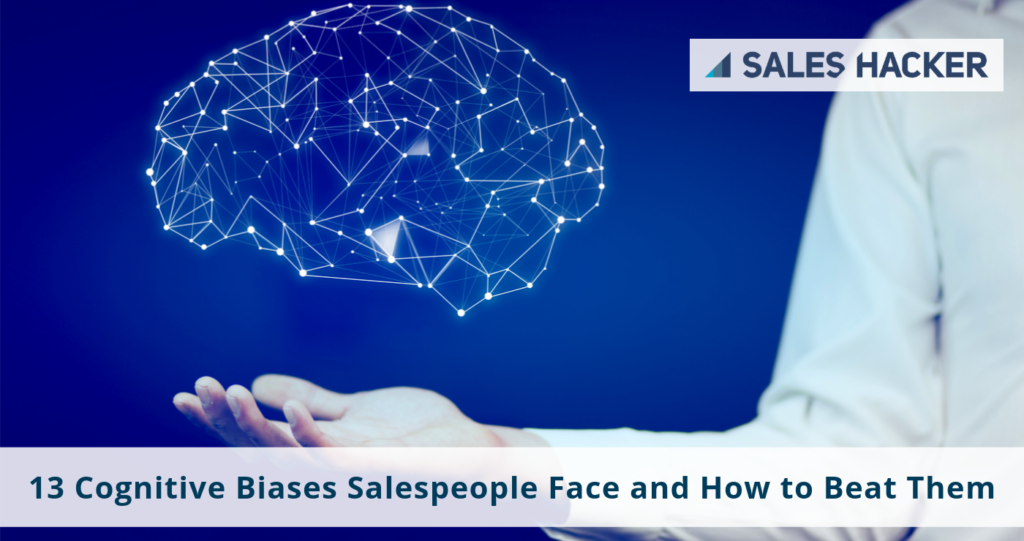 Sales will always be a persuasion game, but the biggest obstacles to success are actually cognitive biases rooted deep in the human brain.

The brain has evolved in strange ways. It has developed mental shortcuts around rational thought: like factory-settings that help us avoid change by ignoring, rejecting, or modifying what we hear.

From an evolutionary standpoint, this makes sense: craving routine made life safer and easier. But in modern times, these adaptations can cloud judgment and decision, preventing meaningful progress from being made.

Salespeople confront these 13 cognitive biases on a daily basis:

This blog will describe the common biases professional sellers face and how to use logic, examples, and stories to break down 250,000 years of evolution to win more deals.

Part One: Examples of Cognitive Biases in Sales

In nature, evolution and advancement are slow processes. Large decisions, in our ancient past, were usually matters of life or death.

As a consequence, we have all inherited a reluctance to embrace new habits, new information, and new risks. The saying, “if it ain’t broke, don’t fix it,” wasn’t just a piece of advice, it was a way to ensure your community’s survival.

Many of these evolutionary holdovers hinder the selling process. These are the most common cognitive biases that trouble sales professionals.

Each bias is followed by a brief description on how they’ll present themselves in a sales context.

Attentional bias is the tendency for people’s perceptions and actions to be affected by recurring thoughts they’ve had in similar situations.

During the sales process, your prospect may be predisposed to hesitation and rejection because of previous sales interactions they’ve had. Overcoming the prospect’s immediate desire to raise objections is a common problem facing sales representatives.

The ambiguity effect is the tendency to avoid scenarios or choices where a positive outcome is uncertain.

Especially during the first point of contact, sales professionals have to convey the reliability and reputation of both their products and themselves. Otherwise, the uncertainty alone will drive the prospect away from making a decision.

Parkinson’s Law of Triviality states that members of an organization tend to give undue attention or importance to easily understood issues instead of more important or impactful ones.

Especially in a complex sale, or when selling subscriptions, buyers may not immediately realize the long-term benefits of your product. For example, focusing on upfront costs rather than long term cost-saving measures.

Confirmation bias is the embracing and amplifying of information that supports one’s existing beliefs over new ones.

For example, hearing that you’ve been acting unwisely or spending inefficiently is difficult for anyone to process. Many prospects will choose to defend their past decisions, insisting that the improvements you describe aren’t possible or have been exaggerated.

The status quo bias is the desire to keep things the same.

Related to Confirmation Bias, this line of thinking assume that if nothing is glaringly wrong, it’s preferable to keep everything constant. More sales deals are lost to “no action at all” than to competitor products. The status quo bias is probably the most common sales inhibitor.

Selection bias is defined by noticing more of something once it’s directly brought to our attention.

This works both for and against sales professionals. When you point out a previously unseen flaw with their current system, perhaps it will influence buying behavior. However, drawing attention to those shortcomings can also prime the prospect to see more of the same in your own product or solution.

Reactance is the urge to do the opposite of what you’re told in order to maintain a sense of independence.

A frequent reaction to anyone perceived as a “pushy” salesperson. This cognitive bias causes most instant brush-offs.

Projection bias is the inaccurate prediction that our thoughts, preferences, and values will remain constant.

Hesitant prospects assume their targets, company cultures, and priorities will remain the same forever. Sales representatives have to make sure buyers know that their ideas will shift as trends progress.

The mere exposure effect is the forming of strong connections to things merely because of a familiarity with them.

Unless the newer option is an exact replica of what a prospect is currently using, they’ll resist a change. This bias can also be used to the salesperson’s advantage if the prospect is familiar with them before conversations begin.

Loss aversion refers to the tendency to fear losses more than we enjoy equivalent gains.

The pain of losing $5 is greater than the joy of finding $5. Even if purchasing your product will lead to noticeable advantages, if the process of changing is too painful, buyers will tend towards inaction.

Functional fixedness is the inability to see objects as useful other than in the most obvious way.

The base rate fallacy is when we ignore broadly accepted information and favor information specific to a specialized case.

Nearsighted buyers will only want to talk about their processes and how those will be immediately impacted. They may be impatient to hear about the general benefits of your product and instead focus on the short-term impact.

The bandwagon effect is the tendency to behave in the same manner as the majority.

This bias works both ways for sales professionals. Social proofing and customer testimonials can influence similar buyers toward your product, but more popular brand names will need to be proven inferior.

Part Two: How To Overcome (or Embrace) the Biases

Even though our brains are thoroughly schooled in ancient practices, we’re living in an innovative, fast-paced economy. Buyers who don’t recognize new trends may fall into irrelevance before any “fad” passes over.

To break the biases, sales professionals can use multiple tools and tactics. Each of the following persuasion techniques can be used to ease worries and show how the path forward will be beneficial and seamless.

Change and uncertainty intimidate buyers away from moving forward in the sales process. One way to overcome these obstacles is to show them how you’ve helped other prospects realize success.

Testimonials are easily displayed on websites and can be quickly dropped into email communications. These should be short statements that indicate positive results, individual buyer satisfaction, and a track record of success. Recognizable brands and high-ranking spokespeople go farther in creating prospect-seller trust.

Customer stories tend to go more in depth. These pieces of sales enablement content seek to create an empathetic bond between your prospect, and a satisfied customer who found themselves in a similar position.

The structure of every good customer story follows a formulaic structure.

Customer stories are best presented as blog or video content and can be shared with prospects post-call or during email exchanges.

Use Case Studies and Surveys

Many biases use experiences and emotional states to inform decisions, but these obstacles can be easily bypassed by presenting logical and numerical facts.

Case studies take the customer story method one step further. By polling current successful clients, you can get a rough estimate of how your product has improved productivity, operations, or communication.

Again, it’s helpful to assign company names to these results, but if enough information is collected in bulk, the sample size will prove persuasive.

Another form of persuasive sales enablement content is the industry survey. The respondents don’t need to be current customers, but theoretically, they should be similar to your ideal customer base. The purpose of industry surveys is to prove that your product is solving an actual need.

This may be necessary when confronting the Base Rate Fallacy, Selection Bias, and the Law of Triviality.

Unfamiliarity with the salesperson – as an individual – will influence buyers negatively. Successful sales representatives know how to display empathy and build trust with their prospects through active listening techniques and clear communication.

When the buyers and sellers become better acquainted, Attentional and Ambiguity Biases can be mitigated through a relaxed setting and candid exchanges. This eventually helps, the mere exposure effect to work in your favor.

Tone and presentation skills go a long way toward establishing good first impressions, but personal accountability counts for even more.

Let them know you’ll be there through the buying process and even beyond. Having an advocate to address questions and guide any transitions will be very persuasive for certain buyer personas.

Change is the great human fear, and possibly the root cause of all cognitive biases.

In business as well as life, we constantly run equations comparing the risks and rewards of doing things differently. As a sales professional, you must make the adoption of your product or service an enjoyable and simple process.

For one, it’s always a good idea (once the ball has begun rolling) to outline what the transition process will look like. Candid sales representatives will create documents specifically for each potential client that say what – and most importantly, when – each phase of implementation will be complete. When prospects have an idea of what the future holds, it seems less scary.

Free trials and in-depth product demos are also a useful way to show your prospects what life will look like post-purchase, but additional measures, such as a service level agreement, will give needed weight to any promises.

Familiarity with recognized cognitive biases is the first, and most important step, in combating potentially negative effects on sales. Luckily, most biases fall into broad sweeping categories related to avoiding change, confronting the unknown, and ignoring new information.

Using the resources described here, sales reps should be able to keep prospects clear-headed and ready to consider an impactful pitch. I started my career in the retail pharmacy business, where I developed a passion for driving sales and delivering excellent customer experiences. After mastering retail management I entered the world of software sales where I quickly went from being a top salesperson to building and leading large sales organizations.

I've hired and trained over 300 salespeople, generating over $50 Million in recurring revenue. I build sales organizations and the operational infrastructures to support them, and I produce a ton of content along the way.

After two successful runs as VP Sales for hypergrowth startups Doctor.com and Aircall, I'm now consulting and advising early-stage startups through go-to-market and building and scaling their sales organizations.

Founder
Collin Cadmus, LLC
More in this channel
New Research: The State of the Sales Tech Stack in 2023