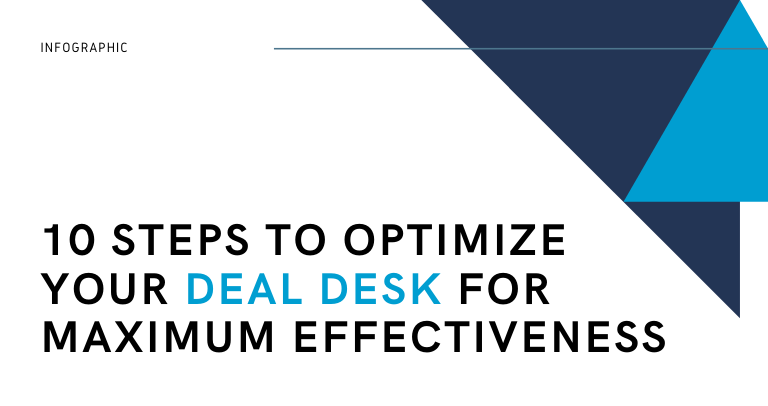 In a recent SalesGlobe survey, 70 percent of companies had a deal desk in their sales organization, but nearly 30 percent of respondents hadn’t even heard of a deal desk.

But even among companies that use deal desks there is a lot of variability on how they structure their deal desks. So, it’s important to take a look at the 10 steps you can take to optimize your deal desks for maximum efficiency and effectiveness.

But first, let’s look at what a deal desk is, and why they’re so important.

What is a Deal Desk?

Complex, large deals with long sales cycles can be a nightmare to manage. The contracts are often non-standard and you may need sign-off from several teams and stakeholders. This makes it easy for mistakes to slip in.

A deal desk gathers all important stakeholders and information in one place to ensure high-value, complex deals get signed.

Most sales organizations manage their deals ad hoc, through email listservs, informal meetings, or manual document creation. This lacks visibility, can be slow and is prone to errors.

They also make good money sense as well because they allow you to make more informed decisions about your deals.

For instance, if legal services cost $10k, but the deal you are working on is only initially worth $5k, you may work hard to avoid requiring redlining. However, the deal may only be worth $5k in year one, but through the information you have from the deal desk, you discover that it’ll be worth $10k in year two. This can change your whole calculation about the value of legal services.

10 Steps to Optimize Your Deal Desk

Just having a deal desk isn’t enough, it needs to be optimized for success.

It’s important to define what types of deals you’ll run by the deal desk and what the responsibilities of a deal desk manager should be.

Deal desks generally only manage non-standard deals. However, a certain small subset of companies do run pricing of standard deals through the deal desk as well.

There’s really no right or wrong answer here. But it’s important to define this early so everyone knows when to turn to the deal desk and what resources the deal desk can provide.

2. Know who does what

Deal Desks are meant to be a centralized hub for all relevant stakeholders to work together.

These stakeholders will differ by company, but they will likely include:

Each stakeholder performs a different function to help the deal desk run smoothly. But, it’s up to you to make sure that they know their role as well as have an understanding of where they fit in the process as it relates to the other stakeholders.

So, once you’ve identified who is going to be a part of the deal desk, sit down with them to iron out who will be responsible for what when a non-standard deal comes through.

Buyer’s don’t generally show up to your website ready to purchase without having done their own due diligence. This process is called the buyer’s journey and it is critical that everyone involved with the deal desk understands it through and through.

According to Hubspot, there are 3 universal stages of this journey:

The challenge for the deal desk is to know how your buyers go through each of these stages.

Where are they first gaining awareness?

What other products or services are they considering?

And what is their decision criteria?

The answers to these questions are crucial to having your deal desk set up for success.

Having an official process in place is crucial to attaining one of the main goals of Deal Desk — speed.

A cumbersome, resource-intensive deal desk would ultimately defeat the purpose. So, cross-organizational efficiency is another important goal.

Creating templated proposals to streamline standard deals is crucial here. In addition, sales must be provided with clear parameters and flexibility in order to experiment with pricing and explore different packaging options.

Without a deal desk, sales teams often lack the approval process needed to handle custom pricing. A deal desk helps set the boundaries for sales reps to make those kinds of decisions on their own.

Sales reps need to be empowered to work as independently as possible. They need visibility into their deals and the ability to automate their standard deal approval process while notifying the right teams for additional approvals to non-standard deals.

Sales teams will usually know their own strategy inside and out, but when the other stakeholders involved in the deal desk do not, it becomes a liability.

All teams involved must be trained in the sales strategy, not just the sales team. Sales assets such as personas and playbooks should be shared with all those involved in the deal to ensure alignment across the entire revenue team.

The only way to judge if your deal desk is succeeding is to define what success means at the outset.

What are you looking to accomplish with your deal desk?

Is it to increase the amount of revenue associated with non-standard deals? Lower the amount of improperly priced contracts that go out? Create greater alignment between go-to-market teams?

There’s no one correct answer here, you will need to define what success is for yourself, and make sure everyone involved knows what your north star of success is.

Deal desks can represent a large investment. And that means, if they’re not achieving the goal you set for them, it’s not worth it. So, establish the KPIs you’ll track to determine deal desk success early.

In an environment where revenue operations is becoming more and more popular, revenue is the north star KPIs. All other KPIs should map back to revenue.

But since the goal of Deal Desk is to create greater efficiencies in the deal closing process for non-standard deals, speed is a critical metric for deal desks.

Focus on KPIs that measure the speed and volume of sales to determine the success of your deal desk.

One of the benefits of deal desk is that it allows teams, such as the product team to be made aware of the scale of a new customer.

When it comes to SaaS, power users tend to push your product to its limits. As you scale your pricing options — especially usage-based pricing — it’s important to prepare your product teams to work towards handling these new demands.

Make sure your engineering teams can work with other deal desk stakeholders to plan and prioritize for the future.

Deal desks shouldn’t be static. As your company scales its deal desk function, it’s important that all stakeholders involved continue to keep an open line of communication with one another.

Regular meetings, quarterly reviews, and close coordination must become a regular part of your deal desk.

Your decisions on how to optimize your deal desk going forward should be based on numbers — what is working towards achieving what you have defined as success?

Identify anything causing friction and remove them while emphasizing what has been working the best.

Put Your Deal Desk to Work

Now that you have your road-map to deal desk success, it’s time to put it to use.

Gather your team, establish a process, get everyone on the same page, and start closing large, complex deals faster.

It won’t always be easy, but if you do it right, it’s well worth it.

We’ve put this infographic together, in conjunction with RevOps, to help. Mark Lerner
@marklerner
Head of Marketing
RevOps
More in this channel
New Research: The State of the Sales Tech Stack in 2023