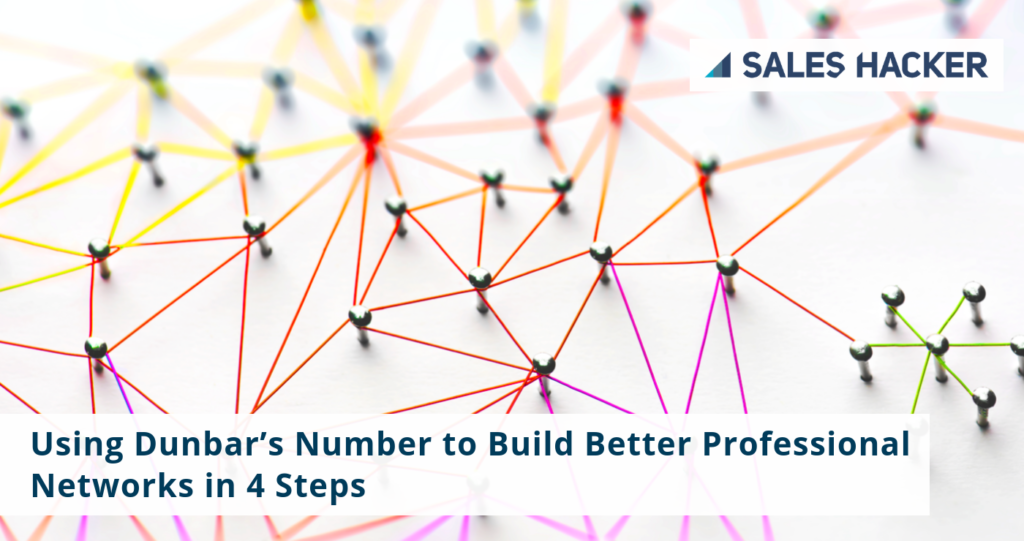 What is Dunbar’s Number?

In 1992, an esteemed Oxford University psychologist, Robin Dunbar, hypothesized that there is a cognitive limit to the number of stable relationships one person can maintain. The number that Dunbar proposed – 150 – has been known as “Dunbar’s Number” ever since.

With the rapid growth of social media in recent years, many have suggested that Dunbar’s Number should be expanded. They claim that thanks to Facebook, LinkedIn, Twitter and other social platforms, we are now able to maintain relationships with a growing number of people. Indeed, a majority of users on Facebook are connected to at least 200 friends, and 21 percent of users have over 500.

And of course, salespeople’s (and their buyers’) networks are affected by this belief as well. 83% of executives use social media to inform their decisions when selecting vendors.

But Dunbar himself debunked the myth that using social media expands the number of people we can truly know. In a follow-up study, he found that despite the proliferation of social media and the digital world, the human brain still cannot maintain more than about 150 to maybe 180 meaningful relationships.

In other words, only a minority of our social media connections are genuine relationships. Those relationships that are not genuine cannot immediately help us.

What Does Dunbar’s Number Mean for a Salesperson’s Network?

Salespeople often rely on relationships and the power of their networks for their success. But really, the old saying, “your network is your net worth” applies whether you’re a salesperson, entrepreneur, venture capitalist, broker or politician. But when we place too much emphasis on quantity of relationships, the result can be disastrous. By putting too much energy into too many relationships, we fail to put enough into the ones that really matter.

Social media has conditioned us to accumulate “friends” and “followers” like trading cards. In doing so, we dilute the quality of our relationships. While social networks are terrific at providing a virtual Rolodex of people we’ve met, they do little to maintain a large volume of relationships that actually matter to our day-to-day work.

Collecting superficial digital relationships is at odds with genuine relationship building and networking. When we spend too much time trying to maintain all connections, we reduce the benefits of those connections and tend to neglect the important ones.

For example, I personally have nearly 4,000 connections on LinkedIn. When I recently combed through the list, I could only truly validate about 140 people – just 4 percent. On a weekly basis, someone will ask, “Can you introduce me to X”, and almost always my answer is “no.”

Knowing that we can only maintain meaningful relationships with a limited number of individuals and that social media doesn’t automatically help us do that, how can we make the most of our professional networks?

The first lesson any salesperson should learn from Dunbar’s number is to be both thoughtful and ruthless when deciding which relationships to invest in. If 150 is the uppermost limit of who you can truly know, trust and reciprocate with, an effective network fills up quite quickly.

At some point, you must decide who to leave in, and who to remove from your closest circle. Some decisions will be difficult, but limiting the number of people in your network is imperative to a healthy network. If that means somebody hears from you less often, or that you’re not as available for them, so be it.

Here are some key questions to ask yourself when deciding who should be included in your network:

Dunbar left room for nuance in his theory. He used a “rule of three” formula to describe how the closeness of our relationships can be viewed through multiples of three. Of the 150 people you have a relationship with, you might have a smaller circle of about 50 people who are close friends or family. Meanwhile, you likely have a larger social group of 450 people you’d consider either friends or acquaintances.

For those 300 or so acquaintances who are not part of your Dunbar Number, you can still maintain lines of communication – you just need to do it differently than you would with your core group of 150. This “asymmetrical nurturing” can be achieved using digital tools such as blogs, newsletters, social media, webinars or videos.

Even though these relationships may be less important now, you never know when one of them may become crucial to your success. For example, think about all your old leads: you wouldn’t necessarily keep in constant touch with all of them, but maintaining some communication would be wise to eventually restart the sales conversation.

The most powerful networks aren’t constrained to a single social graph; their strength is defined by all of the other networks that they’re connected to. This “friend-of-a-friend” contact method is responsible for up to 55% of network connections, and its benefits cannot be understated.

The most effective networkers have a holistic understanding of not only their own networks but also of their second-degree networks and the multiplying effect that they provide. It makes sense in some cases to bring someone into your 150 not because they immediately benefit your business or serve your needs, but because they’re well connected to others who do.

If you want to take advantage of second-degree contacts, try:

Deep, lasting relationships aren’t built overnight. As Adam Grant writes in one of my favorite books, Give and Take: Why Helping Others Drives Our Success, relationships built on trust, reciprocity and mutual respect take time to develop, and they can’t be rushed.

Don’t invest in relationships expecting an immediate return, and don’t push for favors such as introductions or referrals too early. While there’s no exact right time to request referrals, be sure to establish a rapport with an individual to encourage trust before asking for that referral.

Focus on how you can provide value to people in your network, rather than just handing out business cards and making demands. Invest in relationships over time by earning their respect. Have patience, and your networking efforts will pay off. Just because someone doesn’t provide a quick return on your networking investment, it doesn’t mean you have to cut them out of your 150 too quickly.

We’ll be debating the exact truth of Dunbar’s Number for decades to come, especially in light of our increasingly digital lives. But the truth remains that there is certainly some limit to the number of people we can truly know. As salespeople who rely on the strength of their network (and what professional doesn’t?), the lesson of Dunbar’s Number is that quality trumps quantity every time. Anne is the CMO of Shasta Ventures, a venture capital firm investing in early-stage startups. She has over a decade of experience as a startup executive, public speaker, and business columnist. Anne spent the first part of her career in the entertainment industry negotiating partnerships at Paramount Pictures and Sony PlayStation. She then ran the marketing at several venture-backed startups with a focus on enterprise SaaS. Most recently Anne was the VP of Marketing and first executive hire at Affinity where she helped take the company from its first year in revenue to Series C. Anne also has a monthly column in Inc. Magazine.