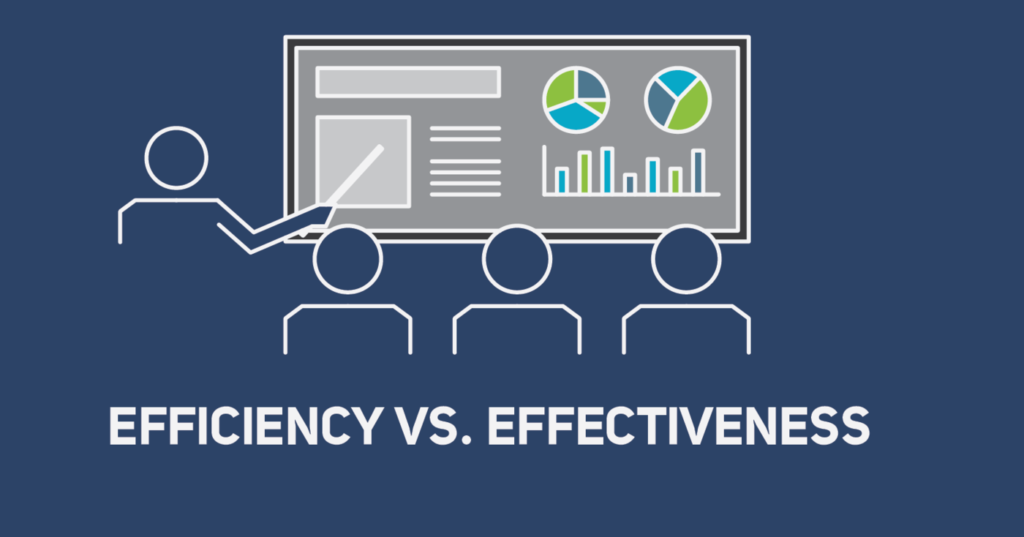 Oh wait, this isn’t a graduation speech. It’s a wake-up call. Something the sales industry is in dire need of.

See, in the past few years, sales organizations, have started to heed what those of us in inside sales have been saying for over a decade:

There must be a better way!

The revelation has come in the wake of a constant bombardment of the latest and greatest sales tools—tools that promise Better, Faster, and Cheaper: The Efficiency Trifecta. There are 1,000+ SaaS platforms designed to drive efficiency in the inside sales world and here is what it costs at the low end. It is not hard to imagine that by 2018 we will be spending $1,000/ month per rep, just to make them do things faster.  While 2016 is certainly the Year of The Sales Stack, remember, faster does not equal better. 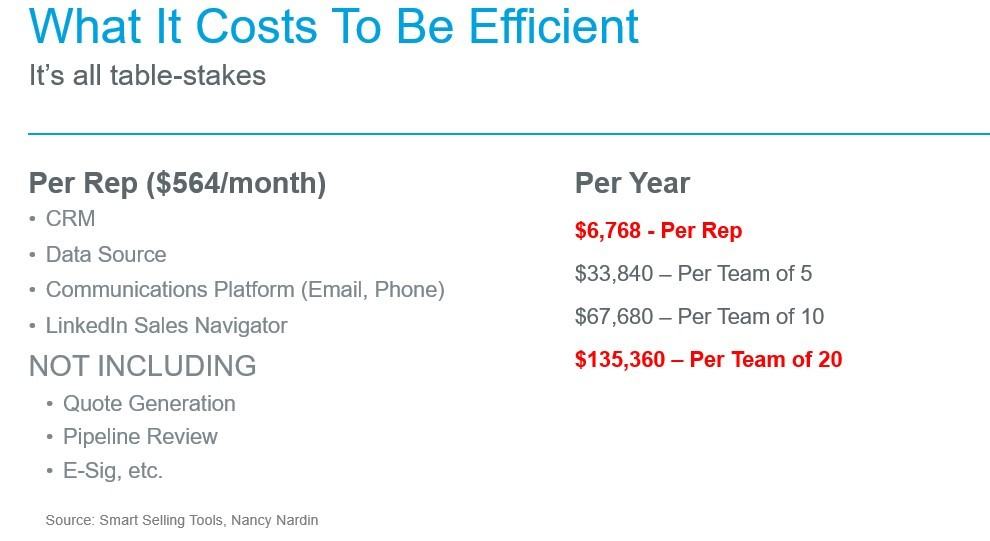 Whether it’s data, dialer, emails, CRMs, leaderboards, or barometers that identify the best time of day to call someone based on optimal air pressure, we buy it. We buy it all because it makes us ”faster” at our jobs. We can smile, dial, and email more than ever before. We can build processes so specific that an SDR no longer has to think; they just show up and see what’s on their “To Do List” and do it.

We call all of this “efficiency,” and we’ve become so fucking efficient it’s a wonder we need to even show up for work at all.

Now, efficiency does matter. It matters a whole lot, actually. But we’ve gone so far down the path of efficiency that we’ve forgotten what it means to be effective.

The average sales stack per SDR or Inside Sales Rep now costs $564/month, or $6,800/year. And that’s just to achieve the first scheduled meeting. That should scare you, but if it doesn’t, this might: A sales stack for a team of 10 inside sales reps costs around $68,000/year on the LOW END! 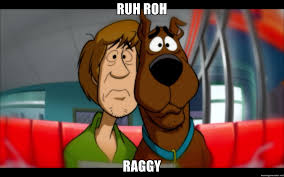 If this makes you angry, then good. You should be, but not at the people behind these tools. It’s easy to blame them, but it’s not their fault. They didn’t lie to us, we lied to ourselves.

They sold this stuff to us because we wanted to be sold to, and these bright, shiny new tools blinded us to the bigger picture. We knew the tools mattered, but we overestimated their power. The little voice in the back of our head was saying, “Okay, this is cool. If we get more meetings, we’ll send more deals into the pipeline, and eventually, more revenue will come in. Plus, if we close at least two meetings, that will pay for the cost of the tool!”

What that voice should have been saying was, “This is cool. We’re going get more meetings and increase the volume of deals going into the pipeline. Now what do we need to do to make sure the reps are having amazing conversations with the prospect to ensure pipeline velocity also increases?”

Or, in plainer terms: “These reps better not fuck up these deals!”

Unfortunately, the opposite happened. The reps did not have amazing conversations, and deal, after the deal fell through, fell into “Maybe-Land”. This approach created what we like to call the “Plunger Effect,” where the pipeline gets so full of shit, people don’t know what to do. In fact, people are scared to even Roto-Rooter the pipeline because it will expose the naked truth. The truth that we have not supported our sales team to improve their discovery skills which would let you keep a cleaner and more accurate pipeline.

Here’s some anecdotal proof for you.  Go to any of your reps. Check any deal where the expected closed date has pushed through 2 standard sales cycles and ask them “Why is that?” Keep asking that same question 3 times in a row. Don’t deviate, no matter what they say just follow up with “And why is that?”  You will most likely discover they missed a qualified timeline and access to authority in over 75% of the cases. Yes, some will be legit, but we all know deep, deep down inside. You know the place we don’t like to talk about, the place where even VPs of Sales get scared when the CEO says, “so what’s the forecast look like?”  We know that deep in the pit of our stomach there is just too much garbage in the pipeline.

Again, nobody lied to us. It’s not the vendor’s fault and most importantly it’s not always the reps fault. It’s the fault of sales leadership team. In their neverending quest for Better, Faster, Cheaper, as well as a desire to make “data driven” decisions, Management and Executive Management overlooked effectiveness, the most important part of the sales process. In fact, they overlooked the sales conversation itself.

Okay, now it’s time to take out a dictionary.

Efficiency is the ability to accomplish something with the least waste of time and effort.

Effectiveness is what is adequate to accomplish a purpose, or producing the intended or expected result.

What word does each definition have in common? ACCOMPLISH!

Yes, we have improved our efficiency enough to have accomplished an important step in the sales process: securing the meeting. The problem is that in most cases, companies don’t actually make money from securing meetings.

Companies make money from producing the intended or expected results OF THAT MEETING!

So would you rather have more meetings, or more effective meetings?

Even if you are at an early stage and want more meetings, if those meetings are garbage then all you are doing is accelerating the suck factor. So, how do we become more effective?

The answer is actually quite simple: Training and coaching. Nothing more, and nothing less. However, training and coaching is not only overlooked, but it’s also often not even understood. It’s easier for an executive to buy a saas tool to help send more emails or make more phone calls. They virtually see and feel these tools.

Because most executives and sales leaders have never actually had sales training they have no frame of reference for what it looks, feels, smells and tastes like. The good founders often think “it’s not that hard I’ve never had the training and I close stuff all the time!”  The problem Mr/s. CEO is that you don’t realize that your title and vision provide ridiculous leverage that cannot be cloned, EVER.

Combine that with the fact that sales training doesn’t connect to the CRM and spit out a colorful and fancy report to “prove ROI” then they feel justified in denying the need and only see it as an expense.

Many CEOs and VPs of Sales believe that sales is a skill that never goes away, and many non-business-oriented founders and C-Level executives believe that when a sales rep fails, it’s because they are not good at their job.

So, when you add all of this up together what do you get?  Training and coaching is viewed as a burden, a cost that cannot easily be measured through ROI, therefore unpredictable and an uncomfortable spend.

Now in some cases, that’s true, but in many cases, a sales rep fails because management is not good at their job. And part of their job is to understand what training and coaching can offer, and dole it out accordingly.

Training is the prep work.

For example, if you were planning to run a marathon, a trainer would help you focus on targeting the right muscle groups. They would help you build your calves, thighs, core, and hamstrings, and advise you on your diet.

Coaching encompasses the elements that occur in the practice field or during game time.

In sales, a coach sits with reps during live phone calls and provides guidance, conducts a post-mortem to establish what went well and what to focus on in the future, and runs role-playing scenarios.

So back to effectiveness. The success of any organization which relies on salespeople comes down to one simple thing: More and more effective conversations are only achieved through sales training and sales coaching. So before you buy the latest and greatest widget which tells you the temperature of the chair your prospect is sitting in, you may want to consider instituting some simple sales training and coaching, which would teach your rep to ask better questions about the said chair, or if they’d prefer to stand. Because it’s not the temperature of the chair that matters, it’s how that temperature is affecting the prospect’s decision making.

We’ll close with one simple thought: Suppose the power goes out. Is your team capable of making good sales calls with only a cell phone and a list of names and titles?  If not, you need to start focusing on effectiveness.

🙌  Teaching reps how to earn the right to ask questions.
🙌  Which questions to ask.
🙌  When to ask them.

👍 Stop talking about what you do, talk about the pains you solve!

👍  I hope to help you focus on a more relaxed conversational style that helps you go from strangers to acquaintances to trusted business allies with your prospects and clients.

🏆 Top 25 Inside Sales Professional by the AAiSP for the last 5 years.
🏆 Top 10 Sales Development Leader as voted by Inside Sales and Sales Hacker.
📰 Published: Harvard Business Review, Huffington Post, Inc, and NBCNews

The Evolution of Sales: Welcome to N.E.A.T Selling™

When To Hire A Sales Consultant: A Simple Framework To Guide Your Decision