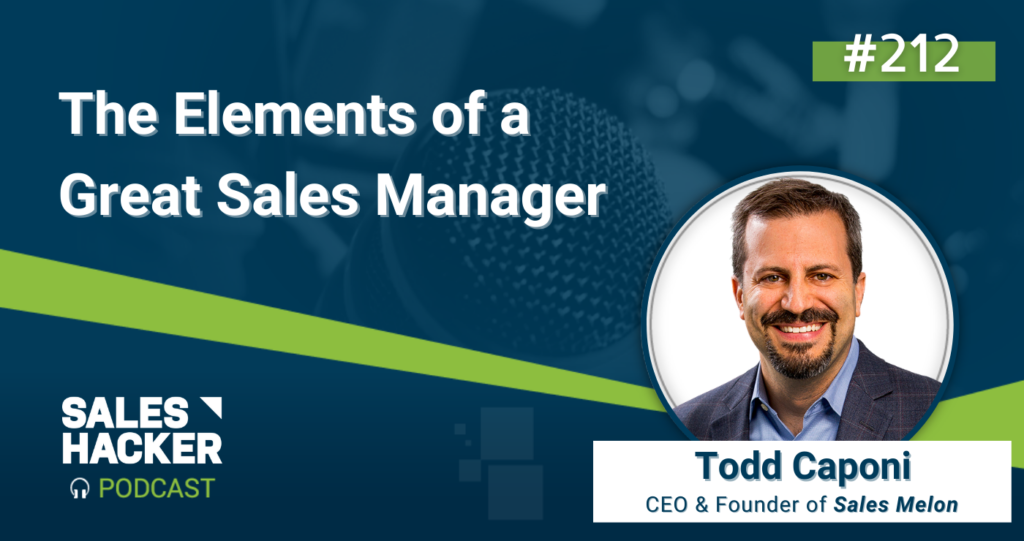 In this episode, we have Todd Caponi, CEO & Founder of Sales Melon and author of The Transparent Sales Manager. Todd is the only guest who has been on two times. Todd joins us live from the Chicago Roadshow for Pavillion.

Todd is a great consultant, teacher and trainer of sales. In part one of this episode, Todd is going to talk about some of the key elements that make up a great sales manager.

If you missed episode 211, check it out here: Learning How to Adapt in the Sales Community with Celine North

About Todd Caponi and his new book The Transparent Sales Manager [0:10]

Sam Jacobs: Hey everybody. Welcome to The Sales Hacker Podcast. Today on the show, we’ve got an excerpt from a live presentation that my friend Todd Caponi gave at the Chicago roadshow for Pavilion, which we did back in May. Todd’s got a new book coming out called the Transparent Sales Manager based off of some of the ideas that he articulated in his first book, The Transparency Sale. He’s a well-known and worldwide author, internationally recognized, and a great sales consultant, teacher and trainer, and luminary in the Chicago ecosystem. And he’s going to talk about some of the key elements that make up a great sales manager.

Now, before we get there, let’s listen to a word from our sponsors.

This episode of the Sales Hacker podcast is brought to you by Varicent. High performing revenue organizations have a plan for growth. Learn how Varicent can help you create a predictable growth engine at varicent.com/saleshacker.

Sam Jacobs: He’s the first returning guest in the four-year history of the podcast and one of the preeminent CROs in Chicago — Todd Caponi.

Todd Caponi: Thank you. Hello. All right. So what we’re going to talk about is really breaking down the science of intrinsic inspiration. So I want to give you a framework or a way to think about, with your teams, the six things that contribute to why they show up every day, they do their best, they stay, and they become advocates to their friends.

So to start off, I wanted to start with a little story and ask you kind of an informal survey. So for me, this was back in 2006. I’m aging like guacamole up here. But before that, kind of like a B plus B sales rep, but I always knew that sales leadership was my jam. Right? I wanted to lead. I wanted to build a team. I wanted to grow a team in the tech space. Like a moron, in 2003, I bought a sales training company and promptly ran it into the ground. In 2006, though, I got hired out to run basically sales ops for a Silicon Valley startup called Right Hemisphere. You’ve never heard of them because we built it up and sold it to SAP in 2010.

Speaking what you want into existence [5:24]

Todd Caponi: Just a quick little story about my first promotion. So day two, I fly out to Fremont, California and it’s sales kickoff. So sales kickoff, a cheap hotel, like a Hilton Garden Inn Fremont. The VP of sales that hired me to come run ops was old school, like “We’re going to pound you with commits for all day,” and “That’s not high enough,” and that kind of crap. We get done with day one. My CEO is like, “Hey, do you want to ride to dinner?” Like, “Yeah!”

So I jump in the car with him. He’s driving an old school PT Cruiser. This guy’s the CEO, and he is driving a purple PT Cruiser from 1993. We go, and the first thing he asked me: “Todd, why are you here?” And I was like, “I kind of want to learn from Tom, who’s the VP of sales and watch a company like this grow. I’ve been with the big ones, the SAPs, the computer associates. I want to watch one grow like this. And then eventually, I want to build and run my own… I want to run a tech sales organization.” He’s like, “Cool.” Forgot about that conversation.

Two years later, I’m in Germany enabling one of our partners. My SIM card on my phone’s not working, so nobody can get ahold of me. It’s 2:00 in the morning. My solution engineer that’s with me is banging on my hotel room door at 2:00 in the morning. And I’m like, “Dude, I just got over jet lag. I finally fell asleep. What do you want?” And he’s like, “Michael, the CEO, needs to talk to you right now. He’s with the board.” I’m like, “Talk to me? About what?”

So I get on the phone with him, and he gives me this story. He’s like, “Todd, I got bad news and good news. Bad news is we had to let Tom go, your VP of sales that brought you here. How are you feeling about that? And I was like, “I guess I’m going to wait until what the good news is.” And he says, “We think you’re ready.” Awesome. Right? I’m not sleeping again tonight. Thanks.

But here’s the thing. My question for you is I didn’t get promoted because I had been trained extensively in sales leadership. I had no structure, no process for sales leadership. It was just because I said that I wanted to and he kind of mentored me through it. For you, and if you lead teams, how many of you have ever gotten formal sales leadership or revenue leadership training? We got two. And there’s a third.

I asked a group in San Diego last week, and there was zero. And then the week before that, there was one, and he is like, “Microsoft trained me in 1995.” There’s like a huge hole in sales leadership structure, and that’s what I faced that next day. I woke up. I’m suddenly running a tech startup sales organization, and I literally am like a dog chasing a car down the street. Right? Every single morning, it was like, which direction is it going? What fire do I have to deal with? This rep’s not doing well. I got this pipeline issue. I’ve got a deal that’s on the ropes. This person quit. I got a board meeting coming up. What do I do?

So I created a structure, and I created a process for myself. And then I’ve added in all the nerdy, behavioral science into it with it. And so today, what I want to do is share with you the behavioral science of that whole intrinsic inspiration because of this. That day one, I had always grown up to believe that this was my team, right? A room full of coin-operated machines. Right? And sales reps are coin-operated if you’re doing it wrong. I believe that there’s science behind this idea that when variable compensation becomes the reward for doing work we want to do instead of the motivator, that wins in good times and in bad. And it’d never become more important than when I talk about good times.

Todd is talking about the hard times that we will have in sales today [11:58]

Todd Caponi: So one little blip in your engagement with your employer and you’re gone. Right? That’s what we saw happen. That’s what at least I saw happen. I’ve seen lots of explanations for it, but hey, quotas went up. We’re going to treat this just like we did before. Quotas are going up. We got to grow 20%. Reps unplug, see ya. Territories got smaller. I just lost a deal. My pipeline doesn’t look so good. Oh, I just went to a party and one of my buddies is killing it and their company is hiring. Unplug, plug in. Right? So the physical cost: Non-existent; the emotional cost: Non-existent, so the triggers to change are almost infinite. And so we have to change that. Right? That was the good times. Let’s talk about the hard times and what we’ve been talking about today. So let’s go back to this chart.

In 1921, there was something I like to call the great salesperson purge. Here’s what happened. In that year, there was 85% salesperson turnover. Now, what’s amazing about it, though, is that the 10 years leading up to it, and that’s involuntary. That’s not voluntary. That’s involuntary turnover. The 10 years leading up to it look exactly like the last 10 years right now, like totally creepy.

Now, I’m not here ringing the “Hear ye, hear ye, the end is near” bell by any means, but here’s the piece that I found really crazy. There was a lead up of slow and steady growth. And then there was an economic disruption that took place in 1918. That was us going into World War I, right? 2020 was COVID. Doesn’t last long. COVID didn’t really affect the economy for long. It was a short period of real bad hiccup.

What happened in the early 1920s in sales that is similar to what is happening now [14:16]

Todd Caponi: And then we came out of it with massive growth, like crazy, that kind of growth. That’s what happened in 1919 and 1920. All of a sudden, turnover in 1919 and 1920 is 60%, and that’s voluntary turnover. More jobs than there are reps, so reps were literally chasing money. And then all of a sudden, what happened? Huge inflation spike. Beginning or late 1920, early 1921, we had record inflation and then the bottom dropped out, crazy levels. 77% turnover in 1921. 85% turnover in 1922, and that was all involuntary. Sales teams, sales leaders were purging their entire sales forces. It was crazy.

It’s great to see everybody getting ahead of that, right, because I don’t think that needs to happen now, and there’s a lot more controls, but what is important is our ability to make sure that our teams, the ones that win, are the teams that stay engaged, right, and that will run through a brick wall for you and your company.

Sam Jacobs: Hey, everybody. Sam Jacobs. Really like that conversation with Todd and the presentation, and we’ve got part two coming up this coming Friday. Todd’s just really brilliant and really intuitive in terms of leading and managing. And so I’m really excited for the second part of his presentation and I hope you enjoyed this first part.

And just a reminder, Pavilion’s got a number of amazing courses coming up, specifically designed for the recession, specifically designed for an economic downturn. All of them included in a Pavilion for Teams corporate membership, which includes your entire sales organization, your entire marketing organization. So if you’re worried, if you’re nervous that your sellers are not empowered, the right messaging, the right mentality, the right approach to help your company grow through the coming economic volatility, I really encourage you to take a look at Pavilion.

Reach me at sam@joinpavilion.com and I’ll talk to you next time.