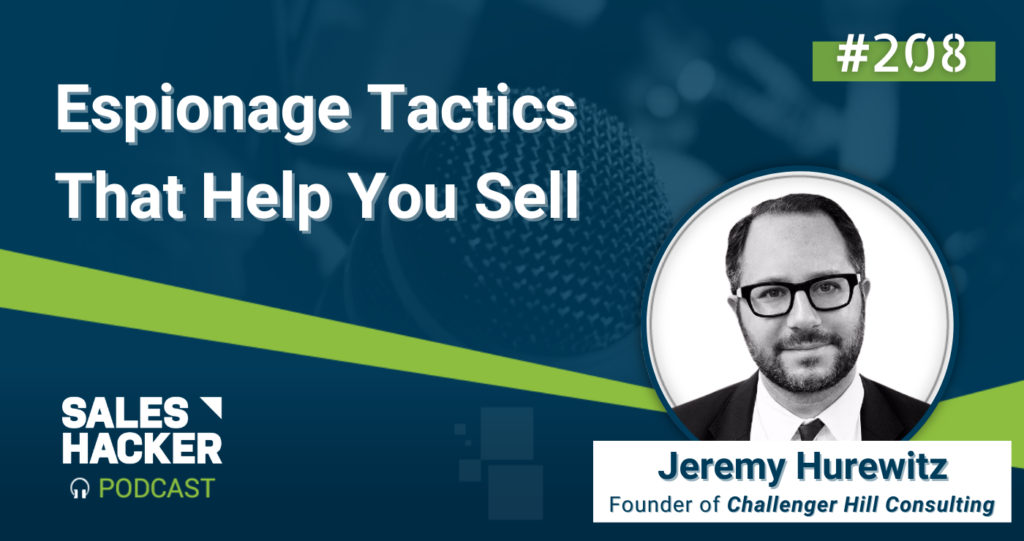 In this episode, we’ve got Jeremy Hurewitz with us. Jeremy Hurewitz is the founder of Challenger Hill Consulting, where he is using his years of International experience to gain a new outlook on leveraging clients. Join us for a great conversation about improving your sales skills from skills he learned from leaders in International espionage.

If you missed episode 207, check it out here: The Journey of New CEO with Jen Spencer

About Jeremy and Challenger Hill Consulting [02:57]

Sam Jacobs: Today on the show, we’re really excited to have Jeremy Hurwitz. Now, Jeremy is the pioneer of a new selling methodology called Sell Like a Spy. He’s going to be teaching a class at Pavilion in a couple weeks. Let me give you his bio really quickly.

Jeremy started his career overseas in media. He built and ran Project Syndicate, a newspaper association based in Prague, the Czech Republic. Starting off with just a few dozen member newspapers and a handful of Eastern European countries, Project Syndicate had over 300 member publications in over a hundred countries by the time Jeremy left, and remains a leading global force in international trade. He returned to New York where he worked at firms, such as Deloitte, the Expert Institute, and the Gerson Lehrman Group.

Most recently he was curation director of NationSwell’s council, where he recruited over 150 members to join the council. He started Challenger Hill consulting, an independent firm that serves as a platform for advising on business development, communications and risks. Jeremy has developed a unique training program called Sell Like a Spy that leverages his extensive experience working directly with former intelligence officers to share insights from spy tradecraft to improve sales skills.

Sam Jacobs: What does Sell Like a Spy mean? Tell us about the origin of it.

Jeremy Hurewitz: Sell Like a Spy is about the idea that spies are the world’s best sales people, because, after all, what’s a harder thing to get someone to actually buy into than to get them to commit treason against their country or organization? Spies are a little bit misunderstood. We don’t hear about the extraordinary successes of these really amazing professionals because of their need to protect sources and methods. I’ve just been extraordinarily impressed with their ability to connect with people. I observed them for many years and leveraged what I learned into my own salesmanship and really grew from that. Sell Like a Spy tries to bring those communication strategies to the sales world.

Sam Jacobs: How did you get involved in the world of espionage and intelligence?

Jeremy Hurewitz: My first encounters with spies were when I was working overseas and wearing two different hats. I, as you noted, built and ran projects syndicate, but I was also a freelance journalist. In both worlds, I bumped up against intelligence officers and perhaps you could call it the race for information to report on things. I’ve always been really interested in this world and reading everything I can get my hands on, but the most direct experiences I started having were when I came back to New York, where I’m from after that decade abroad and worked in corporate security for some big global firms. A lot of them did corporate investigations, which was my specialty in this world as well.

The firms I worked at would put somebody on the top of a hill and take photos or look through a binocular at mines to count the number of trucks coming in and out for a hedge fund… but more about working sources, talking to people about, say, a private equity firm’s going to acquire another company interested in the CEO, want to get a real deep dive into his or her personality, collecting intelligence on some of the intangibles about somebody and whether they should retain them to run the company after they acquire them.

Jeremy Hurewitz: Espionage is about connection, and not about deception. If you watch TV shows and movies, you’ll see spies blackmailing people and torture and extortion — and that’s just really not what the day to day work of intelligence is all about. Spies build rapport and grow relationships with such a huge array of humanity. Spies are so unbelievably good at finding a kernel of interest or empathy with people because they need to connect with them. They have to practice what we talk about as tactical empathy or radical empathy. We as sales people face challenges with difficult clients, people are sometimes condescending to salespeople or dismissive or they’re cynical about it. So we have to get past that.

There’s a quote that’s attributed to Abraham Lincoln, “I don’t like this person. I must get to know him better.” I encourage people to make it a challenge to dig in when you find somebody that you don’t have that natural rapport with. Make it a challenge to get to know that person, if they’re a key part of who you need to grow or to win over that client.

Some of the other things we talk about are elicitation, which is a skill about collecting information in a more circumspect manner. If I was throwing you a surprise party, and I wanted to find out what your favorite food is, I might call you up with a statement that I either know to be false (or just don’t know to be true) and say, “Hey Sam, how about we get some Thai food next week? Didn’t you tell me that’s your favorite food?” You’re going to say to me, “No, Jeremy, Thai is okay, but pizza is actually my favorite food.” So then I know to get pizza for your birthday party, but I didn’t have to ask that directly. It leverages a powerful point from behavioral science, which is the tendency to correct. That’s the way human beings operate.

This strategy bordering on the line of unethical [14:06]

Sam Jacobs: Do you worry that this strategy borders on dishonesty, that it’s not ethical or moral?

Jeremy Hurewitz: It skirts up to the line of that. The sales example for this would be, I have a client, we have a retainer renewal at the end of Q3 that’s a very lucrative important part of my quota, but I don’t know what to expect in terms of the renewal. So I call my client and say, “I just heard a disturbing rumor that Q2’s coming to a close and I’m hearing, it’s been tough, revenue’s down. I’m hearing about budget cuts, layoffs. I was worried about it. I wanted to give you a call,” and they say, “No, Jeremy, you got it actually backwards. We’re doing great. I’m going to be doing some hiring, budget’s good so you better check your sources.” Now I know that it’s not going to be budget or the business environment that’s going to hurt my retainer renewal.

It leverages that tendency to correct, as well as the other point of professional pride. They want me to know that they’re doing well. Look, I understand the perspective that someone might think, “Oh, is that dishonest?” In the business world, it’s a very minor white lie, and it just gets to the fact of how to operate efficiently. But everybody needs to find a different comfort level operating in some of the gray areas that intelligence officers operate in.

Sam Jacobs: You’ve also mentioned that mirroring is a really important part of selling like a spy. Talk a little bit about that.

Jeremy Hurewitz: Verbal mirroring is maybe like varsity level mirroring. Spies do that. They need to build rapport quickly and mirroring someone’s language is a subconscious way to create, to augment that familiarity as a shortcut. They talk about looking for pet words to really actually accentuate as well, because those colloquialisms signal to somebody subconsciously that you’re on the same page.

If a client’s saying to me, “Jeremy, we have a minority investor from China that we want to invite in, great liquidity for us, bring some knowledge and connections in the region but we’re concerned about CFIUS regulations. We’re concerned about our partners in Asia Pacific and we want to avoid a stampede of those partners for the exit when they hear about the relationship with this Chinese investor. Can you help us?”

If I say, “Look, I understand CFIUS, the Committee on Foreign Investment in the US very well and I’m well positioned to help you avoid a stampede of your partners leaving,” it’s the stampede word that I would accentuate there particularly because that’s a word that person chose to use they didn’t have to. So if you use that back at them, behavioral science tells us that will increase the familiarity. It sounds a little crude back to back, but look for words, pet words and colloquialisms, that don’t have to be there that they chose to use.

Sam Jacobs: One of the things we like to do is pay it forward. When you think about the people that have had the biggest influence on you, what comes to mind?

Jeremy Hurewitz: I’ve been rereading a partner of mine on Sell Like a Spy. Bob Grenier has a wonderful book called 88 Days to Kandahar. Bob was a decorated CIA veteran, finished his career as head of the counter-terrorism center and was actually the station chief in Islam about Pakistan when 9/11 hit. The book is mainly about how the CIA was waving their hands about how Al Qaeda was determined to strike, ultimately did, and the enormous burden that fell on Bob and his team after 9/11 to stiffen the resistance in the Northern Alliance and in the Southern part of Afghanistan to attack Al Qaeda.

Sam Jacobs: Jeremy, if folks want to get in touch with you, obviously they should take your class, Sell Like a Spy through Pavilion, but what’s the best way to get in touch?

Sam Jacobs: Hey, folks. Sam’s corner. What a great conversation with Jeremy. What are the things that we can take away from it? One part of all of it is about empathy and getting to know people and putting yourself on the same side of the table as the person that you’re interacting with, negotiating with. Empathy is so important in this modern day, right, where the world is so polarized and we are so tribalistic. It allows you to hopefully see things from a different perspective. And that’s fundamentally the main thing that Jeremy’s teaching in addition to some of the other strategies, tactics, and tips. I think there’s really interesting stuff in there. I encourage you to take his course.

Now, before we go, we want to thank our sponsors.

Reach me at sam@joinpavilion.com, and I’ll talk to you next time.