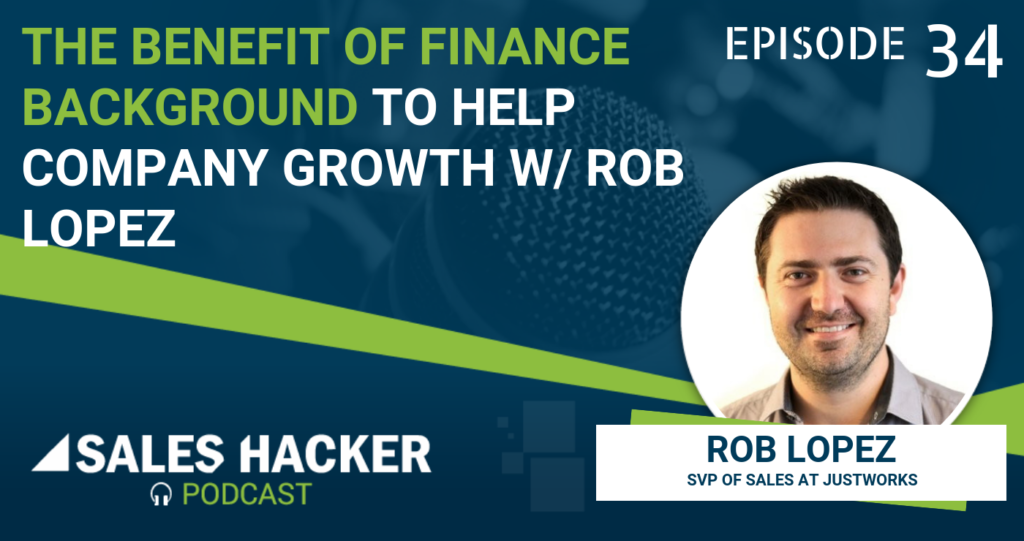 This week on the Sales Hacker podcast, we interview Rob Lopez, SVP of Sales at Justworks, one of the fastest-growing businesses focused on HR including payroll, benefits and the like.

Rob has a background in finance but jumped into the startup world first at Groupon, where he was the GM for their Latin American division, before moving to New York to become the first sales hire for Justworks. He has helped the company grow to well over $50M in ARR and he walks us through that journey on the show.

If you missed episode 33, check it out here: PODCAST 33: How to Grow and Scale a Company in the Digital Age w/ Ilir Sela

Sam Jacobs: Hey, everybody. Welcome to the Sales Hacker Podcast. It’s your host Sam Jacobs. Today, we’ve got a great interview with a good friend of mine, Rob Lopez, somebody who has helped scale the company Justworks from zero–he was literally the first sales hire and doing a great job helping small businesses and growing companies with all of the painful HR things that we don’t like to deal with, like payroll and benefits

We want to thank our sponsors. The first is Aircall. They are a phone system designed for the modern sales team. They integrate into your CRM. They eliminate data entry. They provide in-call coaching and they give you the ability to add new lines in minutes.

Our second sponsor is Outreach, as usual, the estimable owner of Sales Hacker, writ large. That’s Outreach.IO, the leading sales engagement platform. They triple the productivity of sales teams and empower them to drive predictable and measurable revenue growth. And I just got a demo of the new interface, and it looks amazing.

For now, let’s listen to our interview with Rob Lopez from Justworks.

About Rob Lopez: An Introduction

Sam Jacobs: Hey, everybody. It is your friendly neighborhood host, Sam Jacobs. Today we’re really excited to have a good friend of mine on the show. Rob Lopez is the SVP of Sales at Justworks, and if you know about fast-growing companies in SaaS land, then you probably know about Justworks. Rob is leading all of their new customer acquisition go-to-market efforts. So, Rob, welcome to the show.

Rob Lopez: Thank you, Sam. Very excited to be here.

Sam Jacobs: And tell us what is Justworks. What do you guys do, just give us an overview of the company for those that don’t know.

Rob Lopez: The business is an all-in-one HR provider. Specifically, we do HR benefits and payroll for growing companies. Essentially, what we do is aggregate all of their outsource HR services so they can focus on what they do best, which is handling their customers, drawing their business, and trying to focus on that rather than some of the ancillary things that are required, like payroll and benefits, selecting providers.

Sam Jacobs: Walk us through sort of a little bit of your life story. How did you go from finance to leading a startup sales team?

Rob Lopez: I took some classes in finance, took some classes in technology, and ended up meeting an alum who worked at Groupon. At the time, the company was just taking off like crazy. I got on a plane, moved to Santiago, and spent the next three years running around Latin America, doing whatever I could to grow the business. Then I found myself in Chicago, and for the first time in my adult life, I bought furniture, when came a call from a former colleague at Groupon who invested in Justworks. They were seed staged at the time, but Isaac, who started Justworks convinced me to fly out for a week. He’s like, “Hey, worst-case scenario, you get a free trip to New York.” So I did that and since then the rest is history.

Sam Jacobs: What are your theses on going to such an early-stage company?

Rob Lopez: There’s three components specifically that I think about.

Finding Customers Who Were Sold On an Innovative Narrative

Sam Jacobs: You’re dropped in, going from running 150 people to being the sole person, how did you start to prioritize? What did you do first and what were the set of tasks that you did to get the sort of boulder rolling down the hill?

Rob Lopez: One of the things I initially did was, before I even took the job, is that I asked to talk to customers. I wanted to learn why did they buy Justworks, how are they using it, and that’s where I started. Also when I did it, I also read the S1s. China is a competitor of ours. I read their S1. I read all the S1s of all the companies, the 10Ks, the 10Qs to really understand the business. And then I got on the phone and started like going through my networks. Who do I know that I could potentially transition over? If you study the business lifecycle and you go back to kind of the innovative model, we really had to focus on that innovator persona, and that somebody really wanted to support small business believe that they could be part of the product development process, which we allowed them to do.

Sam Jacobs: It’s very rare that somebody joins as the first salesperson and then can make it the distance, which is most of the way towards $100 million. What do you attribute that success to? Are there specific skills that you acquired along the way? How do you think about that narrative because it is so exceptional?

It’s trying to build a culture around that and that has been a big differentiator why I’ve been successful here.

Hire Sales Reps Who Have an Intellectual Curiosity

Sam Jacobs: When you’re interviewing people or when you’re looking at the qualities or attributes of some of the people that really stand out, the top performing reps, what are the things that you’re seeing that they do differently versus everybody else?

Rob Lopez: A big piece of it is intellectual curiosity for us. There’s obviously hard work, but for us it’s this intellectual curiosity and not wanting to give up. I talk a lot about during the Justworks sales process, you’re going to run into a wall. It’s going to happen. The people who are most successful here are the ones who can think creatively outside of the box and either are going to go over the wall, around the wall, or punch through the wall. Can they think of creative solutions for this business owner for Justworks to make sense for them?

The people who really excel are the ones who read up on local knowledge and really understand what’s what about our business.

The Need For Mindfulness in Sales

Sam Jacobs: You’ve made some investments in training and development of the team–one of them is the mindfulness investment. Tell us a little bit about that because that’s really interesting.

Rob Lopez: It’s very unique and I’m really excited. We were talking a lot about sales–it’s very stressful. It’s pretty intense. Sales is also mental, right? There’s these self-limiting beliefs you have and you get them in your head.

We were like, “What if we did something about this? The mental side of sales and how do you think through the problems, how do you manage stress, how do you think through mindfulness?” And so we found this guy who’s a licensed therapist, but he also does a lot of business coaching. It’s talking about that softer side of sales that people don’t really talk about a lot and acknowledging, “Hey, your job is stressful.”I think it’s something that not a lot of people are talking about, but that more need to be.

Sam Jacobs: Give us one or two tactics for managing stress that you’ve gleaned from mindfulness training.

Rob Lopez: It’s taking five minutes, even if it’s only five minutes, to think through and be present about where you are and what you’re doing. Like on your walk to work, take a look around you, look at the architecture, appreciate what you have.

Same thing if you lose a deal. Losing a deal, that sucks, but taking a moment to be mindful, “All right. So why did that happen? What can I do differently? What can I do better?” A lot of people just don’t take time to just be present and be mindful about their day to day and what they actually have.

So, it’s been pretty interesting, pretty powerful. For the people who are going, the initial feedback has been really positive and they’re getting a lot out of it.

Sam Jacobs: Wonderful. Rob, thanks so much for participating and we’ll talk to you soon.

Rob Lopez: Great. Thanks so much.

Sam Jacobs: Hey, everybody. This is Sam’s Corner. A great interview with Rob Lopez. A background in finance and then moving into startup land and going to Groupon and then being the first sales hire. It’s very, very rare that somebody can drop in as the first sales hire and have the support of a founder all the way through to the $100 million mark. So it’s a fantastic that Rob’s been able to do that, and weathered a bunch of different storms along the way.

One of the things that Rob mentioned is this thing called the Justworks Library, which is sort of a tome of the cumulative AR, the cumulative contribution of all of the people on the sales team, and they know that when it circulated, that people that achieve certain milestones immediately get compensation increases and immediately get different types of responsibilities. It’s a really interesting approach to this leveling or career laddering that we always talk about. Really valuable insights from Rob and Justworks itself.

Once again, big shout out to our sponsors for this episode. That’s Aircall, your advanced call center software, complete business phone and contact center, 100% natively integrated into any CRM. And, Outreach, a customer engagement platform that efficiently and effectively gauges prospects to drive more pipeline and close more deals.

If you wanna find me or check out the show notes, see upcoming guests or play more episodes from our incredible line up of sales leaders, visit www.saleshacker.com/listen/. You can also find the Sales Hacker podcast on iTunes or Stitcher.

If you have feedback on guests or recommendations on a guest that you want to see appear on the Sales Hacker podcast, please let us know. We want to make sure that the guests represent a great cross-section of society, not just white males.

If you want to get in touch with me, find my social handles in my bio below.

So I’ll see you next time, I hope you have a great Thanksgiving, and I’m sure I’ll talk to you soon.