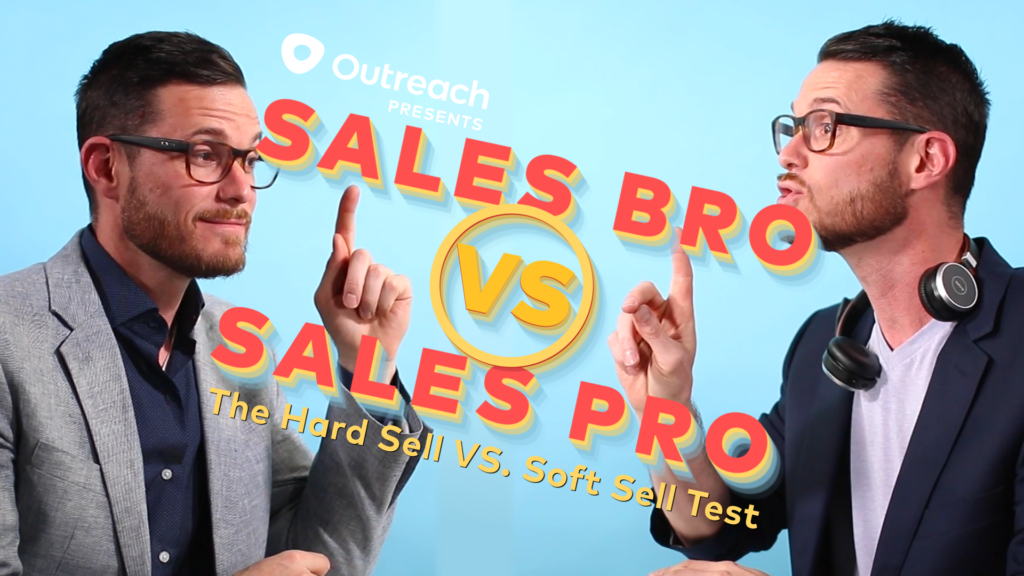 The hard sell vs. soft sell debate is an old one, full of subjective opinions, anecdotes… and not a whole lot of data.

So it’s no surprise there are still two, widely divided camps – each thinking their own approach to sales is the best.

What Is a Hard Sell?

In general, hard sell advocates believe that a good sales strategy is to straightforwardly make a strong sales pitch to get a prospect to make a buying decision. There is no B.S. involved here, which can lead to faster deals.

But because the hard sell approach tends to be more aggressive, it can make some prospects uncomfortable. A DiscoverOrg study found that 44% of B2B prospects don’t enjoy meeting with salespeople because “they have their own agenda and I can feel pressured.”

When should you use hard sell tactics?

Hard selling techniques and tactics can be effective for low-cost, transactional products, where customers are time poor and have already made a decision that they may want to buy. In this instance, a simple statement of why the product is right for them may be entirely appropriate.

In instances where the customer has not made a decision that they want to buy, however, selling hard can easily be off putting and make the potential buyer decide to take their business elsewhere.

Hard selling techniques are likely to be right in scenarios when you cannot count on having long periods of time to engage with prospects, and speed of movement is essential.

Hard sell tactics and technique require individuals with excellent people skills and a strong understanding of their product, so they know when they are pushing at an open door, and when they’re wasting their time.

What are hard sell techniques?

Hard selling requires a certain set of circumstances to succeed. In these low-cost, time-poor environments, the following hard sell techniques are effective.

1. Just come out and ask

Hard sell means just flat out asking the customer what they want and what their budget is. You’ve got to cut to the chase and discover their needs in the limited time available.

2. Create a sense of urgency and scarcity

The hard sell environment is one where you can speed through the sale by creating a sense of urgency. The customer is much more likely to buy if they believe they can’t come back another day. Limited-time offers and special deals can all be used to encourage customers to make a quick decision.

The tradition of hard selling is that you don’t give up too early. Keep asking, in different ways, using different angles, to see if there’s a way the customer’s mind can be changed.

What Does Soft Selling Mean?

We define a soft sell as one that uses a less aggressive approach to decrease that pressure, instead focusing on understanding their prospect and making them feel more at ease.

The downside is that they also may take longer to develop the deal, waste time speaking to unqualified prospects, or lose control of deals more easily.

When should you use soft sell tactics?

Broadly, soft selling is much more appropriate with larger deals and higher value clients, who are likely to appreciate an approach more centered around them and the time they need. A key element of the effectiveness of soft selling is that it requires multiple engagements with the same prospect, so you need to remain sure that the door will remain open.

This isn’t a purely philosophical debate, either. When you’re communicating with prospects at a large scale, small differences in messaging can mean big changes in revenue.

What are soft sell techniques?

Soft sell techniques are about building connection and understanding over a long period of time.

Soft selling often doesn’t start off with selling at all. It starts off by understanding the buyer and what they need – in the expectation that you have something to offer at the end of it.

2. Act as a business counsellor

Similarly, soft sales methodologies emphasize the importance of helping the prospect understand themselves and their own wants, getting them to a place where they are confident about their own buying decisions.

Soft selling tactics require time, and allow for you to build trust by acting consistently, meeting needs, showing commitment to the relationship with the prospect, and generally demonstrating that your company is one which can be relied upon.

Soft sales techniques emphasize that sellers should be willing to walk away if the deal isn’t right for both parties. In practice, this is easier said than done, but the concept of mutual benefit is important. You will benefit from getting money, but the prospect has to benefit from getting a really good product which meets all their needs.

Again, this isn’t a soft-hearted thing. If you sell someone a product which doesn’t meet their needs, they won’t renew the contract, won’t purchase up-sells, won’t refer you and won’t recommend you, so the value you generate from the deal will be low.

Should You Use a Hard Sell Strategy for B2B sales?

How do you determine which approach is best? Outreach designed an email experiment to find whether a hard sell or soft sell made for the most effective B2B emails. In our analysis of 4,500 emails, we found that the more aggressive email got a 1.9 percent response rate. The softer, more polite approach only got 1.1 percent.

However what we found is that although the aggressive email has more responses, a large percent were negative.

The reply data shows that the aggressive email has a 25 percent unsubscribe rate, while the softer email has 10 percent.

Additionally, the softer email has a 31 percent positive response rate, while the negative one has only 13 percent.

In other words, the aggressive email got more responses, but a lot of them were telling the seller to go away.

This doesn’t necessarily mean that hard sell techniques are going to be inappropriate in all circumstances. But there are a number of trends which suggest an emphasis on soft selling is likely to grow. A famous (and disputed) statistic suggests buyers are 57% of their way through a journey before they speak to a salesperson.

And study of sales psychology has emphasized how much listening and empathy can help in the sales process. The move towards social selling, where reps build relationships and demonstrate expertise before attempting to sell at all, has further heightened the sense that a soft approach is more likely to yield rewards.

For this reason, over the years, sales methodologies have tended to emphasize a move away from aggressive tactics, particularly for larger deals where there is time and space to build a relationship with the customer.

I've got my dream job: leading the team at Sales Hacker. Welcome to the smartest B2B Sales community on the planet!

When I'm not working remotely from my home office, I'm hanging out with my dogs, doing some woodworking, and getting outside as much as possible.

77 Motivational Sales Quotes To Inspire Your Team in 2023

What We Learned on the Sales Hacker Roadshow (2022)

Develop Your Ultimate Playbook to SDR Onboarding in 1 Hour (Yes, You Are Missing Things)