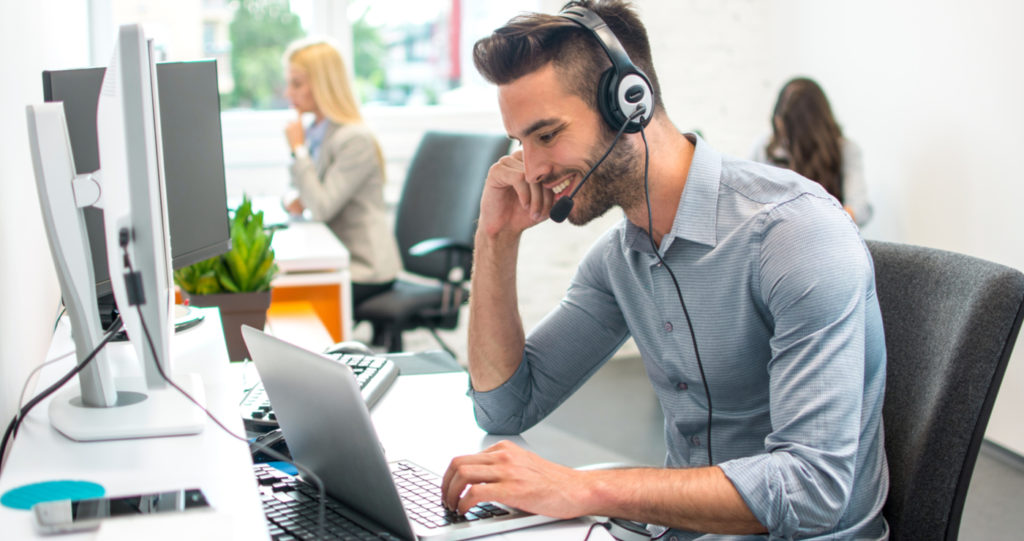 My new SDR was panicking. She was on the phones — the prospect yelling at her — and she didn’t know what to do.

I took her headset and introduced myself as I looked at the prospect’s website.

Turns out he went to school at the University of Michigan. I grew up in Detroit. Literally asking him about that and talking about Michigan winters turned the conversation around and got us a meeting.

Doesn’t it seem like his decision to take a meeting (or buy) should be based on the quality of our product? Or the fact that our product solves a problem for him?

Nope. The first question we have to answer before we meet or buy is, “Can I trust this person?”

That’s right: Your most important asset in sales is trust.

Without it, nothing else matters. With it, you can’t go wrong.

If you have perfect trust, techniques (for the most part) don’t matter. You could do everything else wrong, but if you have trust, you can get results.

But perfect trust doesn’t exist in a cold call (or even an inbound), so we have to live in the grey area in between — trying to build trust while avoiding doing anything to lose it.

How do you do build trust? That’s what we’ll cover in this article:

How to Lose Trust (4 Things to Avoid)

Reps normally lose trust with prospects in one of four ways. These are the tactics you need to avoid at all costs.

This often shows up as using too much jargon. In other words, you’re speaking in a way that comes off as unnatural. That makes you sound like a salesy-person, instead of a person.

RELATED: Does Your Sales Pitch Suck? Here’s How To Fix It (Advice From A CEO)

When I became a leader, I started getting tons of calls from salespeople. It quickly became clear why studies are finding that huge numbers of salespeople miss their numbers.

“Hey Derek, I’m calling from (X company). We optimize lead flow based on the verticals you want to target. We’ve built a SaaS platform that works in collaboration with our AI engine to deliver you results in real time. Can we schedule some time to discuss how we could help you?”

Here are three kinds of jargon to look out for, in order to make sure you’re not that guy. If you’re doing any of these things, you’re getting in your own way:

Salesy words – Here are some examples, but to know if you’re using one, just ask yourself if you use any words or phrases on calls that you don’t when you’re hanging out with your friends. Take these, for example:

Fillers – Um, uh, ya know, etc. The deal with fillers is that they make you seem nervous. People are more likely to trust you if you seem confident.

Technical words – If a seven-year-old wouldn’t understand what you’re saying, don’t say it.

It’s so easy to bend the truth just a little bit to try to get early credibility. But lying is like junk food: It’s great in the moment but destroys you later.

I’ve had people tell me that someone else at my company recommended they call me. It took 30 seconds on Slack to figure out that that never happened.

People who can buy things figure this out quickly. And if I can’t trust you in the first two minutes, why should I trust that what you tell me about your product is real? Why should I trust you’re going to help me out if things don’t go as planned?

Not everyone lies intentionally — some people will give an answer to a question when they don’t know the right answer. No one likes to look like they don’t know what they’re talking about. But prospects don’t judge you for this as harshly as you think.

Think about a time you had a question when you bought something. Did the salesperson, waiter, whoever, know all the answers? If they didn’t, did you stomp out of the store? Most likely, they went and got the answer for you. And that was ok.

In addition to it not being a big deal that you don’t know all the answers, your prospects will trust you more if you occasionally say, “I don’t know, can I get back to you on that?”

If you can say the same thing in fewer words, do it.

Using too many words to say something is linked to the fast-talking salesman trope in our brains. Don’t trigger that!

Our brains are association machines. You can’t just load in facts like Neo in The Matrix. We have to learn via repetition, practice, and associating things with each other. And our brains make associations between things, even when we don’t intend them to.

Early in our lives, we have to learn how to figure out if someone is trustworthy. The stereotype of the fast-talking salesperson who is going to hustle you out of your money is NOT someone that we feel like we can trust.

As much as possible, speak slowly and be concise.

It’s frankly weird the number of sales calls I’ve received that are just the rep telling me about their product. They seem to assume that I can just connect their words to problems that I’m having.

The truth is, a cold call interrupts your prospect. So unless they’re thinking about that problem right then, you’ll have to do the work for them.

If you can then get your prospect to tell you that, yes, the problem you solve is a priority for them to solve, you’re going to have a good conversation.

If it’s not a priority? You can move on right away!

But not getting to that point quickly is going to frustrate your audience and make them feel like you’re wasting their time. If they can’t trust you with two minutes, they’re not going to trust you with an hour.

We’re pretty lucky at PatientPop, because we can easily see if one of our prospects has a problem we can solve. If they’re not showing up for an important search or have a bad online reputation, we know we can talk about how fixing these things will drive in more patients.

Not every company can get this information before picking up the phone. But that doesn’t mean that you have nothing. Your mission is to find out if I’m experiencing the problem your product solves as fast as possible.

How to Build Trust (3 Tips)

Losing trust is easy. But what can you do to build it? This is harder, but if you take the right steps, it’s actually pretty simple.

Be yourself! If you tell dad jokes (like me), tell dad jokes! In my experience, it’s easy to tell when someone is being themselves and when they are acting a certain way in order to get something. Even if you’re awkward, it’s better to be awkward than fake.

In Yuval Noah Harari’s book, Sapiens, he talks about one quality that allowed our species to beat other human species (like the Neandertals): our ability to trust and form communities with more than about 150 people.

This allowed us to do a few things like build bigger armies. It’s also why we can travel the world and feel safe in cities where we don’t know anyone.

When I was selling PatientPop in the field, I met with a doctor who had been burned by half a dozen companies claiming they could help her with online marketing. In order to avoid that happening again, she wanted her husband to be at our meeting to help her evaluate our product.

As I shook his hand, I could see in his eyes that he was skeptical and protective of his wife’s business — as he should be.

I asked him about his own background. What does he do? Where’s he from? Where’d he go to school? It turned out that he was from Wisconsin and grew up spending his summers in Lake Michigan.

RELATED: What Happened to Relationship Selling?

I’m from Michigan and grew up spending summers on Lake Huron. We talked about fishing and canoeing and swimming. And I’ll never forget what he said to me.

“It’s nice to meet someone with good, Midwestern values.”

We hadn’t even talked product, yet, and I watched his skepticism melt away.

Solve a problem or show your audience a new way of thinking. If you’re giving someone something valuable without even charging, they’re much more likely to think that the paid product is great.

At PatientPop, we often teach doctors about how search works. Often, they’ve hired SEO companies to target the obvious search terms like “doctor” or “OBGYN.” Those companies usually don’t deliver results, so doctors can tend to believe that online doesn’t work for them, or that it’s too competitive.

But most searches are NOT for those popular words. And as our prospect learns why other companies have failed, they become better buyers and we look like experts.

Being trusted isn’t going to solve all your problems. It does mean, however, that you’re getting out of your own way.

Build trust, and your cold calls will be warmer, your prospects will tell you the real reason they won’t buy, and you’ll create a better experience (which makes them more likely to buy from you!). Been selling/managing sales teams for 17 yrs. New managers don't get trained, and that pisses me off. Follow me for tips on being a f-ing awesome sales leader.

Creator
Next Level Sales Leadership Project
More in this channel
New Research: The State of the Sales Tech Stack in 2023