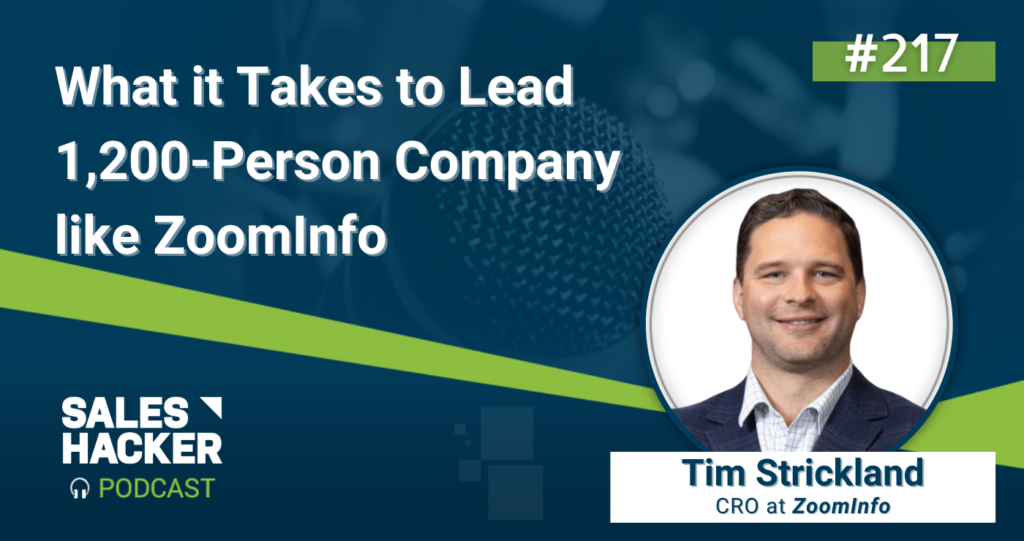 In this episode of the Sales Hacker Podcast, we have Tim Strickland, CRO at ZoomInfo, a sales tech company that empowers revenue teams to drive business growth with its suite of multiplatform tools. Join us for an in-depth conversation about ZoomInfo’s growth, how to lead large organizations, and how to dominate the market during economic difficulty.

If you missed episode 216, check it out here: Finding the Perfect Fit—Managing and Hiring in the New Sales World with Mike Sadler

Sam Jacobs: Hey, everybody. It’s Sam Jacobs. Welcome to the Sales Hacker podcast. We’ve got a special guest on the show this week: Tim Strickland, the Chief Revenue Officer of ZoomInfo. We talk all about the growth of ZoomInfo, all about their mergers and acquisitions activity, particularly over the last two years, and the vision of Henry Schuck and how the company has grown from what it once was to something that is over a billion in annual run rate or close to it, multi-billion dollar market cap, and one of the leaders in the sales tech space. A really inspiring story and Tim’s a great leader and a great communicator.

First, we’re going to hear from our sponsors.

This episode of the Sales Hacker podcast is brought to you by Freshworks. See how thousands of businesses use Freshworks to shorten sales cycles and improve sales conversions faster.

Without further ado, let’s listen to my conversation with Tim Strickland.

Sam Jacobs: We like to give you an opportunity to pitch your business and give us an overview. In your words, how do you describe the platform that ZoomInfo has built?

Tim Strickland: ZoomInfo’s platform helps our customers find their next best customer. We help companies do digital customer acquisition and customer expansion inside of their install base via our collection of applications, so pretty straightforward. We sell pretty much to any company out there who is selling their product or services to other businesses. We’ve been around since 2010, founded by Henry Schuck, who’s still our CEO.

Tim Strickland: I think generally speaking, the M and A has been a large part of our success because it’s given us new pathways to growth, for sure. But it has also enabled us to push the market from a competitive perspective in the way that allows us to dictate how people consume go-to-market technology. As I talk to my organization on a very regular basis, the way that we think about who we are as a business is: Change is always going to be forced upon you that you have to react to. But our motto and motion is to dictate change on others as much as we possibly can, while also still being able to deliver an effective and efficient go-to-market motion.

Sam Jacobs: When I became aware of DiscoverOrg, I was surprised that it acquired ZoomInfo. I wasn’t sure if they were the same size company or if one was bigger than the other, but it felt like all of a sudden, ZoomInfo just became a massive company. Was that a merger of equals? How was that pulled off?

Tim Strickland: DiscoverOrg was a little bit larger from a run rate standpoint, but I’ve actually heard Henry talk about this in other podcasts that he’s done. Before the ZoomInfo deal happened, a lot of companies who had been with DiscoverOrg for a long time, who were very happy and were receiving a lot of value from that solution, but they were also evaluating ZoomInfo because of the disparity of the quantity of data that ZoomInfo had in relation to DiscoverOrg.

At the time, DiscoverOrg was focused on less data but super high quality, where ZoomInfo had built this engine to acquire lots of data about companies and individuals. And so as Henry learned more and more about the business and the competitive threat that existed, he was like, “Hey, look, I want to make this move,” convinced the board to make the move, made the move, and then we were able to scale that business as a point solution. We had a good 18-month run before we started layering on other applications.

Sam Jacobs: What have you learned about integrating companies? Because I can tell you that from everything I hear from the CEOs that I talk to, it’s way more work and way more fraught with peril than sometimes people appreciate, and I’m sure there’s best practices that you’ve picked up over the course of the last two years.

Tim Strickland: The operational best practices are almost secondary. Usually, the major challenge exists on the people side of the house and making sure that those people who you bring into your business have a very clear path of how they can go be successful inside of the ZoomInfo engine. And that might be as a standalone organization. It might be as an integrated organization. It might be as a hybrid of the two. But if you can provide a path for those individuals to be successful, I think you’ve set yourself up for success, because it’s way easier to retain those folks.

But on the ZoomInfo employee side, I think the culture aspect and the people aspect of M and A is also a challenge, because what you’re asking your salespeople to do and your marketing organization to do and your operations organization to do and your analytics organization to do is to support this new sales motion that exists, especially when you’re selling into an install base, where you’ve got to coordinate multiple people and multiple actions, and do you double up quota? Do you have your core people sell? That new set of applications, do you have those people who know those applications really well continue to sell those? For how long do they do that before you transition it to the core?

Mindset and frameworks needed to run a large organization [13:59]

Sam Jacobs: There’s a lot of people listening. Maybe they’re AEs. Maybe they’re first-time managers at smaller companies. But when you think about running a 1200-person organization, how do you approach it on a daily basis? What’s the mindset that you have?

Tim Strickland: The way that I think about my job, and I think that the way that any, regardless of whether you’re a salesperson, early career salesperson, late career salesperson, first-time manager, your primary job is to make sure that you manage your time well. Now, does that get a little bit more complex across 1200 individuals? Yeah, but I think the challenge is the same to try to solve for. It’s about: How can I effectively eliminate the noise that exists in a world that’s filled with constant change and be very clear in prescribing the direction that people need to sprint in order to deliver results with the least friction possible?

Sam Jacobs: You used an interesting word when you were talking about the business. You used this word dominate, and I just wonder if that speaks as the culture at ZoomInfo, about how you want to dominate the change or dominate the market, not just react to it. Now we find ourselves in a different economic circumstance than we were nine months ago. It looks like maybe we’re heading into recession. We could be in recession. How are you preparing your team?

Tim Strickland: I think the harder environment to sell in is the one of uncertainty. And what I mean by that is you can sell growth into growth times. You can also sell efficiency and doing more with less into recessionary times. The most difficult is the middle ground, where people are like, “Well, it’s not either one of those two things, so what should I do?” That is the harder of the three macroeconomic conditions that I think any sales organization has to sell through. And for us it’s about, “Hey, look, what areas of the business could potentially be impacted by some of the leading indicators that we see?” And if we have a beat on that and we’re able to make decisions based on it in near real-time, then we’ve done what we can do as a leadership organization to manage. I think the bigger challenge comes when those things blindside you and it takes you three or four months to react. That’s where you can be in a precarious situation.

Sam Jacobs: You’ve got a ton of people working for you that are early in their career, and they all aspire to be you one day, running a massive organization for an incredible company. What’s the advice that you give young people entering the workforce? When you reflect on your success, what’s the advice you give people that want to be you one day?

Tim Strickland: Just keep your head down and work really hard. I think the first thing that I always tell people is deliver results; because if you do that, you don’t have to sell yourself nearly as much. And then I think, two, be really open to change. We talked about that early on in our time together, Sam. But I think the people who are not only open to change but thrive in that type of environment and being open to finding new opportunities in growth levers, if you couple that with results, I think you’re going to be in a pretty good place career-wise.

Sam Jacobs: Hey, everybody. Sam’s corner. Many great nuggets in there, and I think one of the key characteristics of great leaders, great salespeople, is resiliency: The ability to adapt to change.

I can tell you that it may look up and to the right on a spreadsheet, but inside an organization, particularly one that’s growing as quickly and changing as quickly and is as acquisitive as ZoomInfo, I can tell you that there are things that are breaking all the time. There are processes that need refinement and adjustment. As I tell my team, shit being broken is a feature, not a bug of a high-growth company. By definition, high-growth companies are trying to become something different. They are trying to become something new. That’s what growth means. You were one thing. If you wanted to just do the same thing over and over with no growth, you could perfect every process. Everything would work perfectly, but it would work perfectly in a stagnant environment that nobody would probably want to work in.

Really, really cool story, really inspiring. And clearly, Tim has those qualities that you look for in a great sales leader; relentless drive and focus and vision and ambition, but also, cares about his team and wants to nurture them and wants to develop them.

Reach me at sam@joinpavilion.com and I’ll talk to you next time</p

Why Champion Lifetime Value is Critical with Christian Kletzl