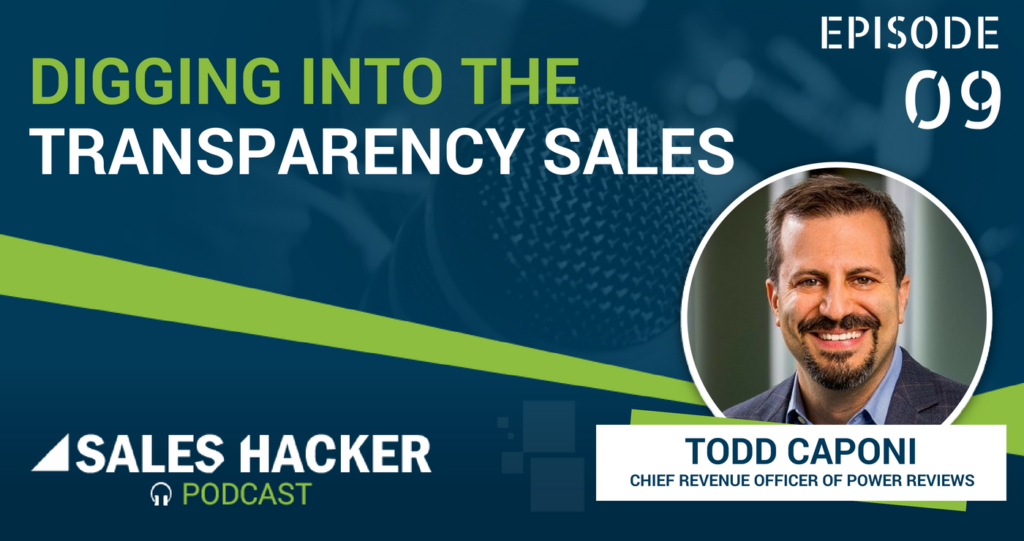 On this episode of the Sales Hacker podcast, we talk with Todd Caponi, former CRO of PowerReviews about how to sell enterprise software solutions with increased transparency in the sales process.

Sam Jacobs: Before we start, a quick thank you to this month’s Sales Hacker podcast sponsor Gong — the #1 conversation intelligence platform for sales. Gong helps you generate more revenue by having better sales conversations.

It automatically captures and analyzes your team’s conversations so you can transform your team into quota-shattering super-sellers.

And now on with the show.

He spent the last three and a half years building the revenue capacity of Chicago’s PowerReviews from the ground up as their CRO. Prior to that, Todd held leadership roles with three other tech companies including ExactTarget.

He’s a former American Business Award Winner—The Stevies—for VP of Worldwide Sales and has also owned and operated a sales training company. His first book, “The Transparency Sale” is gonna be released in the fall. It’s got a lot of interesting content that we will talk about today. Welcome, Todd to the show!

Sam Jacobs: Let’s go over some quick stats so we know why we should be listening to you. Your name is Todd Caponi. What’s your current or most recent title?

Todd Caponi: I was CRO of PowerReviews here in Chicago for the last three and a half years. I’m still helping out as I’m moving into this transition phase, which is writing the book.

Sam Jacobs: For those that are not in the know, what does PowerReviews do?

Todd Caponi: We help primarily brand and retailers collect and display ratings and reviews and Q&A. The two primary competitors that we would run into would be Yotpo and Bazaarvoice.

Todd Caponi: Right now they’re running in that $25 million to 50 million ARR range. The CliffsNotes version is they were acquired by Bazaarvoice. The Department of Justice shut it down and forced the divestiture. Then I came in in 2014 to rebuild the sales force from a cold start once the Department of Justice’s ruling cleared.

Sam Jacobs: That’s a story I’ve not heard before in startup land. The DOJ came in and shut it down. Wow.

Todd Caponi: What essentially happened is this. It was 2012. There are two companies primarily in the space doing ratings and reviews.

Bazaarvoice felt like it would make sense to blend the two. And the PowerReviews customers apparently were upset about it and complained.

They filed a lawsuit, they won and Matt Moog—the CEO of PowerReviews restarted it in the summer of 2014.

With about 30 employees and seven reps and over the last three and a half years, we’ve built that to about 150 employees in my organization. As I’m on my way out now, it has a little over 60 people.

How Todd Came to Be in Startup Land

Todd Caponi: Back in the 1990s, I was doing the big companies. I did Computer Associates, I did SAP. For anybody who has been around in the tech space from back then, there was this thing called the year 2000 crisis.

Companies were going to the SAPs and the Oracles of the world and saying, “Rip out what I’ve got. Put in a whole new infrastructure.” So 1999, I did 872% of my number and I thought my shit didn’t stink.

I saw all these startups that were coming then. There was a guy that I knew that was selling wooden pallets. He came to SAP for like three months, went to a startup, and then cashed out for a million bucks!

And so in March of 2000 is when I stepped into the startup world. That also happened to coincide with the bubble bursting.

Sam Jacobs: I feel like you’re describing my cryptocurrency investment cycle! Just as everybody’s out, I’m deciding now is the time to buy Ethereum.

I worked for a couple of startups. There was a company called ICG Commerce back in 2000 that was just throwing money around. We were burning money at a pace that was unbelievable. I then worked in the digital marketing space—did that for about a year and a half and then after September 11, there was just no money and no spending. I found myself out on the street.

After this was Hyperion, which is a big company again. That was when I discovered that my true passion was for teaching. I took all of my money and bought a sales training company.

Sam Jacobs: What were you training people on? Were you using other people’s ideas or did you have a specific innovation that you were bringing to the market?

Todd Caponi: The focus areas were cold calling techniques—teaching that it’s not about your opening. It’s about how you respond and conversationally turn around negative responses.

We also had a sales forecasting methodology. A way to build your pipeline so that you could visualize and know how much prospecting you had to do.

I did it for three years and became a total nerd for selling methodologies.

Where most sales orgs fail is in building relationships

Sam Jacobs: What were the common things that most sales orgs didn’t do well?

Todd Caponi: I was training banks and recruiting firms for the most part. We really had to work on programs that were about nurturing and establishing trust.

Sam Jacobs: How do you position value in a short interaction? What were some of the lessons from those organizations?

Todd Caponi: The second we feel that somebody is trying to sell to us, your blocker goes up. And as a banker, we needed to disarm that—the limbic filter of these buyers. You have to build a relationship with them. And the way you do that is what I call succinct value.

Every interaction is not about you and your bank and whatever commodity that you’re selling. It’s about how you can make your buyer’s life easier. Be helpful and eventually when they realize their current situation is no longer sustainable, you’re definitely going to be on the list of people they call.

Sam Jacobs: Let’s move to the book. Walk us through the philosophy in The Transparency Sale.

Todd Caponi: At PowerReviews, obviously we do a lot of studying for our clients to understand what works and what doesn’t. One of the studies found that on a five-point scale, a product with a 4.2 score sells more than a product with a five.

In a transparency sale, you lead with your vulnerabilities from the first conversation. At PowerReviews, it’s amazing what’s happening. It’s speeding our sales cycles and disarming buyers. So post the sale, there’s much more collaboration because you’ve actually built an understanding that you’re not perfect.

This pitch cuts through the crap

Sam Jacobs: Give us an example of what your pitch is like.

Todd Caponi: I was once pitching to this aggressive VP of E-Commerce. He wanted to know how we outranked our competitor but, I started off my pitch with how we’re not. Once we did this, the entire room’s demeanor shifted. When there were about 10 minutes left, he kicked everyone but me, out of the room. He showed me his budget line and asked me if we could it.

What could have taken 3-6 months, was wrapped up in three weeks.

We just cut through the crap and never once made him feel like he was being sold to.

Sam Jacobs: Are there more sort of pillars of “The Transparency Sale” that we should be mindful of?

As sales professionals, we’ve always been taught to sell focused on logic. We should be focused on inspiring feelings and emotion. Thus, painting a picture for the client because that’s what drives the sale. It’s the feeling and in the end, they’ll back it up with the logic. So that’s point number two.

Finally, our goal in a sales cycle is to get that buyer to make one decision at the end. My book then talks about how you can influence your buyer’s micro decisions along the journey so they will continue down the path with you.

Sam Jacobs: Is there a methodology that you would employ to redo the sales process? Or is it training that accelerates or augments the existing sales methodology?

Todd Caponi: Yeah. It’s definitely the latter. When you talk about the evolution of sales—I listened to your podcast 02 with Steve Denton. He talked about how selling has changed. This really isn’t a methodology shift—it’s the way you speak with your customers.

One of the things that you can do as an exercise before you go in to talk to a prospect is this.  Figure out which of the differentiators aren’t going matter as much to them. Lead with those because it still serves the purpose of making them feel like you’re not selling to them.

You’re a trusted partner here that’s trying to be transparent. What you’re doing is making sure that you’re illuminating some things they might care about that somebody else might be better at.

Todd Caponi: And, when it comes to sales qualification, I rely on TEMP over BANT.

TEMP is—is there a trigger, are they engaged, do we have a mobilizer, and have we identified a plan with timing that’s gonna get us to a decision.

The reason that BANT for me has not been great is that budget is sometimes challenging. A lot of times if we’re dealing with a true mobilizer in an organization, they are going to go find the budget. If we find out they don’t have thewe budget, it shouldn’t disqualify the deal.

If there’s a compelling trigger in the organization, that says that their status quo isn’t sustainable.

Todd Caponi: Brainfluence by Roger Dooley, Descartes’ Error by Antonio Damasio, and The Man Who Mistook His Wife for a Hat by Oliver Sacks.

How to get in touch with Todd

Todd Caponi: All my contact information is on transparencysale.com

Sam Jacobs: Awesome. We will get in touch that way. Thank you so much for joining the Sales Hacker podcast and I’ll talk to you soon!

Another great conversation this time with Todd Caponi who used to be CRO at PowerReviews. Now he’s writing his own book, “The Transparency Sale”. It sounds quite good and there’s a bunch of little interesting tidbits that I picked up. The lesson from my perspective is to make it about the prospect, while still creating the illusion of scarcity.

To check out the show notes, see upcoming guests, and play more episodes from our incredible lineup of sales leaders, visit www.saleshacker.com/podcast-subscribe

You can also find the Sales Hacking podcast on iTunes or Stitcher. If you enjoyed this episode please give us a share on LinkedIn or Twitter.

Finally, a special thanks again to this month’s sponsor, Gong. If you want to get in touch with me, find my social handles in my bio below.

I’ll see you next time!