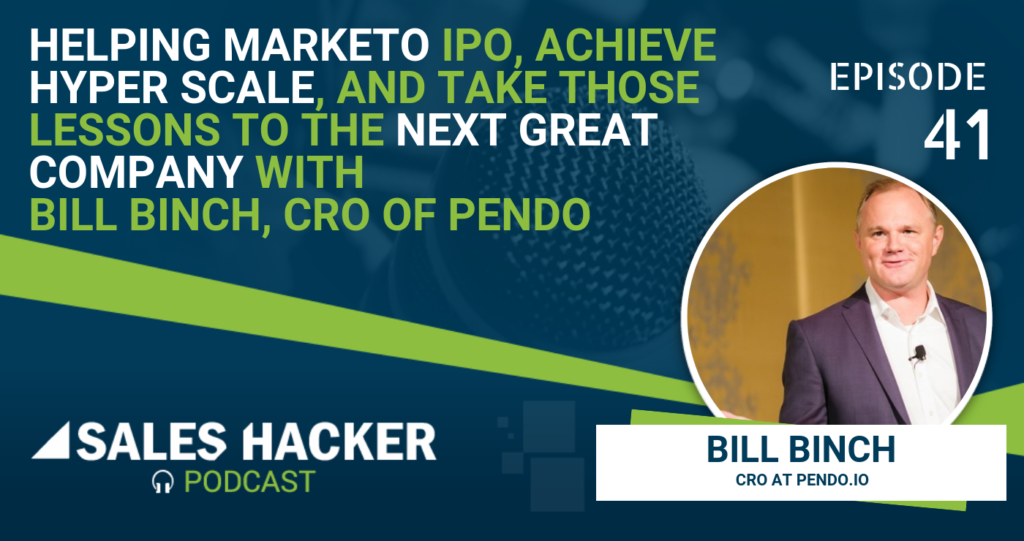 This week on the Sales Hacker podcast, we talk to Bill Binch, Chief Revenue Officer for Pendo and a former sales executive at Marketo who, over close to 10 years, helped guide the company through multiple phases of growth including both an IPO and an acquisition.

Bill is the consummate commercial leader, sales manager, and team player and walks us through his career insights.

If you missed episode 40, check it out here: PODCAST 40: How to Lead a Top Performing Inside Sales Team at a Public Company with Amy Appleyard, SVP of Sales, CarbonBlack

Sam Jacobs: Hey, everybody! It’s Sam Jacobs and this is The Sales Hacker Podcast. We’ve got a fantastic show for you today. We’ve got Bill Binch, the chief revenue officer of Pendo, one of the fastest growing businesses in the United States, perhaps the world. Bill is an acknowledged commercial great and leader. He spent close to ten years at Marketo, rose up the ranks and eventually became EVP of worldwide sales. He’s a fantastic leader, and it’s really clear why people love working for him.

Now, before we dive into it, as always, we have to thank our sponsors. The first is Chorus.ai, the leading conversation intelligence platform for high gross sales teams. Chorus records, transcribes, and analyzes business conversations in realtime to coach reps on how to become top performers. With Chorus, more reps meet quota, new hires ramp faster, leaders become better coaches, and everyone in the organization can collaborate over the actual voice of the customer. Our second sponsor, as you know, is Outreach. They are the leading sales engagement platform. Outreach supports sales reps by enabling them to humanize communications at scale.

Coming up in March, Outreach is running Unleash 2019, the sales engagement conference. This is gonna be the definitive new sales conference in the world. The listeners of the pod get $100 off, simply for entering the code “SHPod”.

Without further ado, let’s dive in and listen to this interview with Bill Binch.

About Bill Binch: An Introduction

Sam Jacobs: Hey, everybody. It is Sam Jacobs, and you are listening to The Sales Hacker Podcast. Welcome to 2019. We’re incredibly excited to have Bill Binch, who is the chief revenue officer at Pendo, one of the fastest-growing businesses and startups (to my knowledge) in the U.S. and, perhaps, the world.

At Pendo, Bill oversees all revenue-bearing aspects of the business, including the sales, customer success, and professional services organizations. He’s had sales leadership experiences at Oracle, PeopleSoft, and BEA Systems. In 2008, he joined a little company called Marketo, and he helped them grow from zero in revenue to over two hundred and fifty million. In 2016, his sales operation grew from targeting B2B to B2C, from SMB to enterprise, and from domestic to global with customers and offices all over the world.

We are super excited to have you, Bill. Welcome to the show.

Bill Binch: Thanks, Sam. I’m ready to get 2019 kicked off with you, so thanks for having me join.

Sam Jacobs: So, you’re CRO at Pendo. What is Pendo? Tell us a little bit about what the company does, who they are.

Bill Binch: Pendo’s in what we call the product analytics space, which we really define as being able to measure the user behavior of what your user’s doing inside your app, so that’s what we call insights. And then we allow you to action that, so we allow you to help guide that user experience to be better so that your customers end up loving what you do.

The Opportunity Found in the Journey of Challenges

Sam Jacobs: Did you worry that you were too much in terms of teams that you’ve managed and the systems that you’ve built? How did you get right with the risk-reward profile of a company that has 27 customers and is tiny compared to these big organizations?

Bill Binch: That’s a great question. First of all, there was a small company called Avilant that I spent fifteen months at, wasn’t doing a lot in revenues, had burned through five VP’s of sales in the last five years prior to me. What I saw was, number one, the chance to be a vice president of sales. Not just be a regional vice president or something like that, but to be the vice president of sales, and to work for the CEO. There’s a skill in learning how to work for a CEO.

I call it my Year of Learning and not of earning, because I didn’t make much money at all, but I learned a lot from the CEO. I learned how to be dynamic, how to not be so regimented, which big, billion-dollar companies train you to be really good at.

That was in ’07 while I was at Avilant, and I met with the Marketo founders. And I adored them, but they didn’t have a product. I met with them, I liked them, but I wasn’t ready to make that risk. About a year later, [the] CEO reached back to me and said, “Hey, Bill, we have a product. We have about sixteen customers. We’re going to market in about a month. I’d love to show it to you.”

I came in and I fell in love, again, with the team and even more with the product and the space.

“I went from being a vice president with over a hundred people working for me, to being a director, with about nine people working for me. And a lot of people always ask me, “Jeez, was that a step backwards?” And sure, from a title perspective, it was. But, like I said, I was pursuing something specific. I was trying to check a box of something that I hadn’t done previously.”

Sam Jacobs: When you reflect back, because you were there from 27 customers and a couple hundred grand, to well over $250 million. How did you maintain your standing and your position? Or were you layered and laddered over the course of those years, but you liked it for the bigger opportunity of having equity in a company that’s ultimately acquired for 1.8 billion. That’s obviously worth more than whatever the title is at the company.

Bill Binch: I got in and was the head of sales and customer success, which was an army of about five people at the time. I was the seventeenth person in and I embarked upon an amazing ten-year journey of incredible highs and successes, and the biggest business challenges I’ve ever faced, and moments of heartbreak and despair and everything like that. Was it an incredible learning experience that I look back on and wouldn’t give up for anything at this point? I wouldn’t, because even though it didn’t feel great at the time, I look at all the things I’ve done. I’ve run SMB, I’ve run the enterprise; I’ve run the direct, I’ve run the indirect; I’ve run the sales, I’ve run the customer success, I’ve run both. I’ve run domestic, I’ve run international. How many people can tell that story?

Very few people have the fortune of going from basically zero in revenue to a couple hundred million, and going through those stages.

Sam Jacobs: I think it’s really hard to scale a company if you’re threatened by the people that work for you, or with you even. You have to have a big enough vision that you are rooting for everybody’s success, because ultimately, you’ll become unreliable as somebody giving counsel or advice to management, if it’s clear that you’re self-interested the whole time.

Bill Binch: Well, let’s think about this. You’re hiring me as a CRO. If you’re hiring me to be a CRO, you’re not hiring me to be the alpha level salesperson. If that’s what you’re trying to get, then that’s not what I want at this stage in my career, and it’s not the right fit for both of us. So, let’s figure that out.

Sam Jacobs: A lot of people don’t realize, the number one job of a C-level executive is recruiting. It’s not your job to have all the answers. It’s your job to make the smartest people want to work with you.

Bill Binch: It’s number one, Sam. Obviously, the CRO, their job is to deliver performance, but number two is to put the players on the field, and so that second part is just such a core component of the role.

RELATED: How To Build (And Scale) A Successful Sales Development Team

Bill Binch: Yeah. This creates a little controversy, and that’s not why I say it. I’m trying to provoke a thought process more than anything.

Let me first start this way, that Marketo, and then here at Pendo, we have a career path. We have a path where we can go recruit SDR’s who are right out of school, train them up in that role and then path up to a corporate sales role, which can lead them to, mid-market or they could go into management role.

So, we do have a carved-out path. And it’s necessary for me to give that to recruit top talent. People wanna be able to see that if they join here, that they have a place to go.

My point about A-players, is that A-players don’t tend to follow a defined career path. What happens with A-players is, opportunity knocks, and smart, savvy A-players answer the door when it knocks.

And they go follow it. The important thing there is, for people that are top performers, opportunity is gonna present itself, and take it. Just take it.

Sam Jacobs: Hey, everybody. It’s Sam’s Corner. What a fantastic interview with Bill. It’s clear why people love working for him, and how he’s capable of taking these companies to such great heights. And I particularly liked his advice on career path-ing–when opportunity knocks, answer the door.

Now, if you wanna check out the show notes, see upcoming guests, play more episodes from our incredible lineup of sales leaders, visit www.saleshacker.com/listen/. You can also find the Sales Hacker podcast on iTunes or Stitcher. If you enjoy this episode, please share with your peers on LinkedIn, Twitter, or elsewhere.

If you’ve got a great idea or a guest for the show, if you wanna get in touch with me, find me on Twitter or on LinkedIn. Finally, thanks again to our sponsors. Chorus, the leading conversation intelligence platform for high growth sales teams, and Outreach, the leading sales engagement platform.

I will see you next time.

What it Takes to Lead 1,200-Person Company like ZoomInfo with Tim Strickland