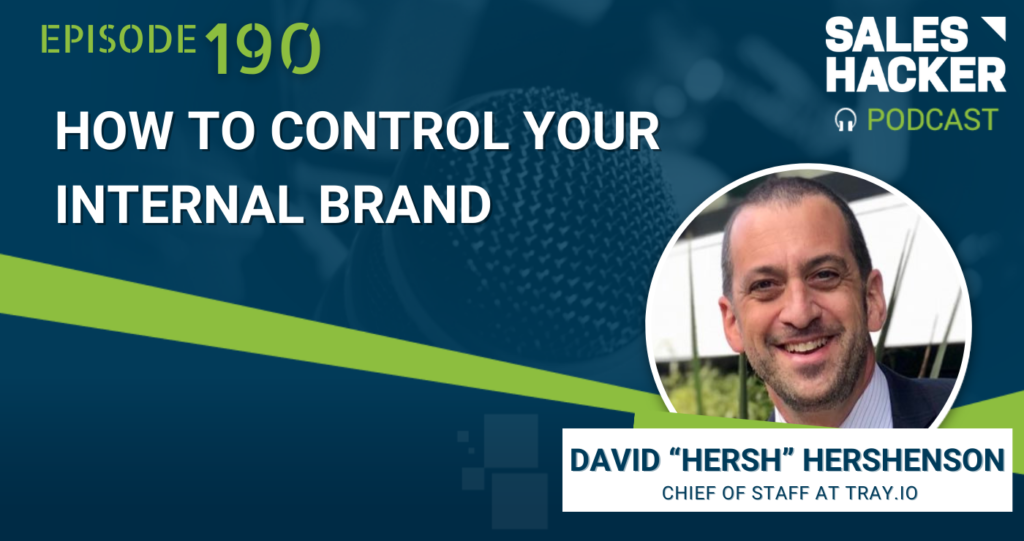 In this episode of the Sales Hacker Podcast, we have David “Hersh” Hershenson, Chief of Staff at Tray.io, a 20-year veteran of the high-growth world and one of the first 200 employees at Salesforce. Join us for a candid conversation about leveraging feedback to understand your internal brand.

If you missed episode #189, check it out here: Meaningful Recognition: How to Show Your Employees That You Care

Sam Jacobs: Today on the show we’ve got David Hershenson (Hersh). Hersh is the chief of staff at a company called Tray.io. He is a many-year veteran of the software and tech industry. He’s been through two IPOs and a one-and-a-half-billion dollar Microsoft acquisition. Hersh is based in the San Francisco area. He talks about managing and navigating your career.

Before we get there, we’ve got sponsors to thank. The first is Outreach, the first and only engagement and intelligence platform built by revenue innovators for revenue innovators. Outreach allows you to commit to accurate sales forecasting, replace manual processes with real-time guidance and unlock actionable consumer intelligence that guides you and your team to win more often. Find out why Outreach is the right solution at click.outreach.io/30mpc.

We’re also brought to you by Pavilion. Pavilion is the key to getting more out of your career. This December, Pavilion is partnering with Ecology to plant 50,000 trees to try to remove some carbon from the atmosphere. For every member that’s referred by another member, we’ll plant 250 trees. So help us plant 50,000 trees this holiday season and sign up using a friend’s referral link.

Finally, Vidyard. Vidyard is the best way to sell in a virtual world. Whether you need to connect with more leads, qualify more opportunities, or close more deals, Vidyard’s video messages make it easy. Try Vidyard for free by signing up at vidyard.com/free.

Hersh, welcome to the show. We like to start with your baseball card. I’ve been hearing a lot about Tray. But from your perspective, what does Tray do? And can you give us a sense for where you are in your growth journey?

David Hershenson: We solve a business problem that’s existed since the beginning of SaaS, where we’re in essence an integration platform that allows our customers to automate any business process the way they want across their technology stack. We’re now over 300 people globally, and we’ve raised over $109 million.

David Hershenson: About 20 years ago, I moved to San Francisco and interviewed with a little startup called salesforce.com, where there were less than 200 people.

That was the only company I interviewed with. And boy, am I glad that I did. I spent a good seven years there from the early days of $25 million in revenue to over a billion and taking the company public. It was a phenomenal experience.

It opened up my network; every job that I’ve had since then has been because of the people that I worked with there and had developed good relationships and good rapport with.

Some of my other successful wins — and not all of them have been successful, but the ones that I like to tout — are my time at Yammer. That was the one and a half billion dollar startup founded by David Sacks. There was a lot of Salesforce DNA there as well. That was a phenomenal ride that ended way too soon.

And then I spent time at Zendesk. My first or second day was when we IPO’ed. Then I came across Tray. I had just been introduced to the founders and was really looking for a place where culture was important. I wanted to enjoy the people I was working with.

Other than Salesforce, it’s my second longest stint at any company. I’ve seen a lot of SaaS market growth from the days when Larry Ellison said the cloud was like fiction. It’s been fascinating to me to see how the industry has progressed. I feel really lucky and fortunate that I got in on the ground floor. It’s been one hell of a ride since.

David Hershenson: The goals have to be achievable. They have to be attainable. But we also have to push people for the stretch goal to achieve.

I think there are a few things that you can look at to make the big ass, audacious goal that seems unachievable. From a goal setting perspective, you can’t make it so unattainable that it drives resentment from the team. You have to be able to get close, but you still have to drive people to push past what they think they can do.

Steve Jobs didn’t seem to be a very nice individual to his employees, but he didn’t really care. What his employees said was that he could manifest greatness from everyone around him. They weren’t really sure how he did it, and maybe that’s just what his secret sauce was.

I consider myself a really nice human being. I developed a good relationship with a lot of the people that I’ve worked with in the industry. I don’t consider myself an asshole. And I don’t think I could ever do that. But to think about working in that kind of environment, where as mean as these people said Jobs was, he was able to get people to achieve — it’s fascinating to me.

How to manage your career in the high-growth world [16:24]

Look at your brand. We talk about the external brand that you see on LinkedIn, of course, and all of the education programs and podcasts that have been developed to that topic. As companies grow — and we know that I’m a 20 year veteran, and I’ve worked at a bunch of different places — I think what new hires and people who are early in their career don’t realize is that brand is important.

I’ve worked with several people in three different companies, and I would happily work with them again. And that’s based on the brand that they built working with me in the past.

Operate your career like you would a sales cycle. Identify the decision makers in the organization that’ll ultimately be the ones to promote you into that next company or into that first leadership role. You need to figure out who those people are, and then figure out what their challenges are and how you can help them succeed.

Invest time and energy in building out that professional network.

Never burn bridges. I can’t tell you the number of times from 10 years past, I’m still getting back channel referral and reference requests for people that worked for me. I don’t think people realize that component. If things didn’t go well 10 years ago — if someone were to ask me that all important interview question: Would you work with this person again? — I would still say no. Be careful. The decisions that you make early in your career will impact how your career goes many years later.

Change is the only constant. If you’re in high tech and you can’t embrace change, or if that change bowls you over like a huge rock and you get sucked into the drama, get out of tech. That’s what technology is, it’s constant change and you have to embrace it.

David Hershenson: At Yammer I was managing a pretty large team, and we did a 360 review. The most impactful information that I received was the feedback that I got from my bosses around how they perceived me and what my shortcomings were.

One of the things that was told to me, and this was hard, was that any time I’d walk into a leadership meeting, it was like I wasn’t there. I never spoke up. I never contributed. As painful as it was to hear, it was the most impactful thing that helped propel me to being able to now lead teams, walk into a room with other leaders and make myself known.

It was such a learning moment for me. And that’s a way for me to think about how I was building my brand unsuccessfully, clearly. But every company that I’ve worked at since, it’s been top of mind. And I keep that at the forefront to help continue to build out relationships in the brands, my brand, internally.

Sam Jacobs: Hersh, we’re almost at the end of our time together. In the last little bit, we like to pay it forward. We like to know who the people are, the books, the ideas that you think we should know about.

David Hershenson: As much as I say I read business books, I don’t. As much as I tell people, listen to these podcasts, I’m bad at it. I have not done enough to invest in my own success and career. I’m married, and I have two girls. They’re nine and 11. Yes, I work hard, but pretty much everything I do outside of that is focused on them.

As I’ve gotten older, I now realize when I think about what’s important. My family is first for me at this point. Everything else is a far second. And so that’s where I’m personally investing my time and energy — to be a better husband, better father, more present.

Sam Jacobs: Hey, everybody. It’s Sam Jacobs. You’re listening to Sam’s Corner. Loved that conversation with Hersh. Good person, good guy, great father. He had a lot of great nuggets, but one of them is managing your brand both internally and externally.

We hear so much about people saying, “Manage your brand,” and what they mean is to post more annoying things on LinkedIn. You should definitely be more annoying on LinkedIn. But that’s not what Hersh means. He means: What’s your internal brand? What do people think about you? And what is the feedback that you are getting consistently? Hersh is still getting reference checks on people that he worked with 10 years ago.

I was talking with a friend yesterday when we were watching football, and he had concerns about how people perceive him. He’s a CEO. His therapist said, “Hey, let’s do a reality test. Let’s go ask some people what they think based on the specific situation.” It’s just such good advice. If you don’t know what people think about you, ask. Ask in a nice way. Ask in a non-aggressive way. But get some feedback.

Right now somewhere in the world, someone is saying something about you, and hopefully it’s nice. But whether it’s nice or it’s not, you should know what it is.

If you want to reach out to me, sam@joinpavilion.com or LinkedIn.

Talk to you next time!