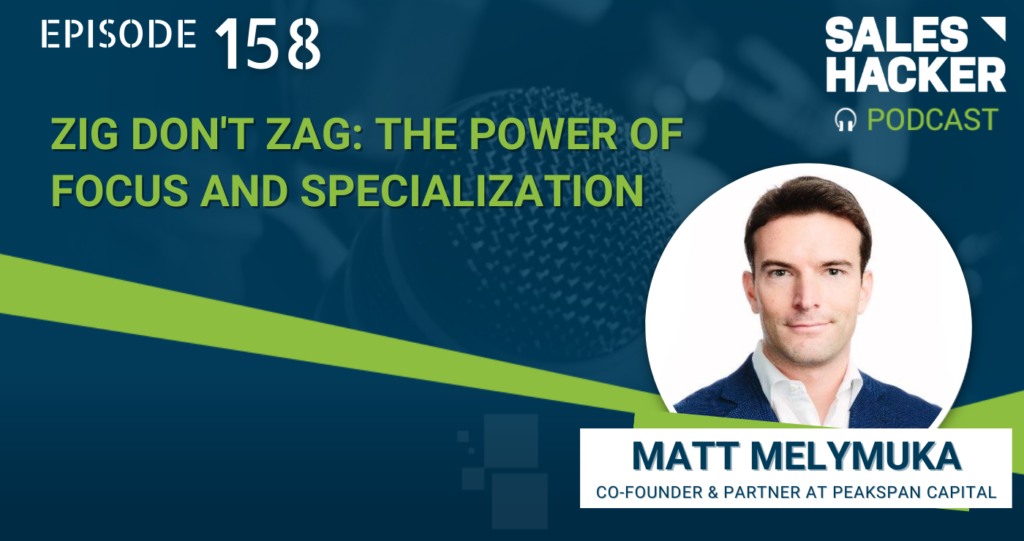 If you missed episode 157, check it out here: Bootstrapping, Building & Scaling Startups with Lloyed Lobo

Sam Jacobs: Today on the show we’ve got Matt Melymuka, co-founder and partner at PeakSpan Capital. Matt and I talk about how PeakSpan is zigging when others zag. Specifically, we discuss the perils of raising a ton of money at the highest possible valuation and pouring it into hyper-growth. Maybe that’s not the right decision for your company.

Before we get there, we want to thank Outreach, our sponsor.

And before I jump in, I want to tell you about Unleash 2021. On May 11th through 13th, we’re focusing on how to win altogether in the new sales era. You’ll learn new go-to-market strategies. You’ll also get deeper funnel insights and actionable takeaways for your entire org from revenue leaders at high-growth startups and Fortune 500 companies.

Our very special guests are none other than Guy Raz, podcaster and author of How I Built This, and Carey Lohrenz, the first female fighter pilot in the US Navy. So come save your seat for this high-energy online event at Unleash.Outreach.io.

Now, let’s listen to my conversation with Matt Melymuka.

It would be one thing if that worked 8 out of 10 times. Instead, it burns out about 8 out of 10 companies. As an asset class, venture has about a 35% average capital loss ratio. Meaning, if I’m investing in 10 companies as an investor, three and a half are dying. It’s like the Oregon Trail: you set the pace to “strenuous” with bare bones rations, and you die going over the first river.

By the way, three-and-a-half out of 10 is the average loss rate. Some tier-one firms have 60 or 70% capital loss. My partners and I have invested in about 25 companies before PeakSpan together and 25 at PeakSpan. Across those 50 growth-stage B2B partnerships, we’ve only lost money one time. Our capital loss ratio is less than 3%.

How misalignment can force you to do what you don’t want to do [10:00]

Matt Melymuka: So if you raise the highest possible amount of money at the highest price you can, you have fundamentally obliterated a section of the exit spectrum.

Misalignment begins on day one. It comes with a bunch of money from a nice investor who put together an “entrepreneur-friendly” term sheet. Be aware: they’re not going to let you sell the company unless you take your post money and multiply it at least five times.

You don’t have to do that. Now, if you are getting into that kind of relationship knowingly, that’s fine. But a lot of entrepreneurs have no idea what they’re getting into or the operational risk they are assuming.

Here’s the counter approach. Imagine your kid is in elementary school. On his birthday, you give me a basketball and say, “Son, don’t talk to me until you’re on the Boston Celtics starting five.”

That’s crazy. You’d never say that. Instead, you’d say, “Son, I’m going to coach you. We’re going to dribble every day together. And we’re going to get better and better throughout middle school and then high school and college.”

If he stopped the sport in middle school or high school, you’d still have enjoyed the process. In the same way, companies can build healthy expectations without misalignment.

What’s wrong with over-fueling the machine [14:16]

Sam Jacobs: When I’ve seen companies grow really quickly, it hasn’t been because they had the most money. It just has been because they’ve been perfectly aligned with the market and their product served an important need. Oftentimes those companies are profitable and may not need capital. I’m not sure if you have a similar perspective.

Matt Melymuka: Pouring too much capital into the machine inherently and definitionally encourages things like hiring too quickly or taking unnatural operational risks. In a way, that excess capital can actually be a negative.

Now, I love selling money to companies that don’t need it. It’s kind of an interesting dynamic; that’s my job. We really work hard to prove what we’re like to work with as a partner well before you’re raising money. And it’s not just words, we actually do a lot of honest-to-God work for companies that we’re trying to partner with.

I think the venture asset class as a whole has done a horrible disservice to entrepreneurs. Every investor is “value add,” but most investors don’t really do anything.

Why you should de-risk your concentration of wealth [17:04]

Sam Jacobs: I can imagine many founders and even early employees thinking about capital, especially if they don’t need it. “Okay, if I’m going to raise money at any valuation, I want to make sure that I have the opportunity to take some off the table.”

What’s your perspective on secondary as a function of a percentage of the amount invested, are you fully supportive?

Matt Melymuka: I couldn’t agree more. In every single company that I partner with, I really encourage the entrepreneurs to at least take a little bit off the table. You certainly don’t force it. And I would be a little uncomfortable if it was 20 million bucks, but I think there’s a level that is really smart to diversify your personal wealth portfolio.

The companies where the founders have no liquidity and they’ve taken a very small salary for years and years, they’re going to be kind of holding the value of that company tighter and tighter and tighter, and not making best decisions for the business, but maybe the decisions that are mitigating risk the most.

Taking a little money off the table and putting your kids through college or paying off your mortgage, I think it’s totally smart.

Sam Jacobs: I think it’s relevant to what we’ve been talking about because you are an investor in the sales technology space. And that is a space where people are trying to get access to our decision-makers so they can sell sales technology. It becomes more crowded with new entrances and as quickly as there’s a new category.

Matt Melymuka: It’s something I think about a lot as an investor who focuses on sales tech, but also an investor who prides himself on being pragmatic in a category that’s really, really noisy.

There’s a supply and demand imbalance in software and certainly in sales tech — not enough opportunity or new opportunity and a ton of companies and new startups going after it.

I see it in every category. It’s cool to be an entrepreneur, right? It’s cool to work at a startup. I think by virtue of that, there’s a ton of companies that come up that are a really smart founding team.

But it’s creating a supply and demand imbalance.

Sam Jacobs: Tell us about one of your portfolio companies that you’re super excited about, that you think is a solution that drives an outcome that we should be aware of.

Matt Melymuka: I work with a UK-based company called Cognism. When I partnered with them, they were probably about 4, million of revenue or so. They ended 2019 at about seven, did last year at about 12 and we’re approaching 15 now. So solid growth.

Cognism blends a high integrity, GDPR compliant, B2B prospect database. We combine that database with tools to action the data. Think of a light touch SalesLoft or Outreach. The combination of those two solutions under one hood at a disruptive price point.

Now what we’ve done is coupled that with a third element, which is an interesting contextual intelligence piece.

Cognism offers a fundamentally outcomes-based solution that is sexy because it drives revenue, but certainly not innovative or algorithmic. So it’s less flash in the pan, but I love that business.

One of them is that PeakSpan is comfortable with a 3X return. They don’t need a 10X return. And that probably pushes them into private equity, which is why he calls it growth equity investing.

When I’ve been at successful companies, the growth was not related to the capital. The money passed through the organization and we still were growing at venture rates. Same thing with Revenue Collective, frankly. Last year we grew on average 12% month over month ARR. We’re profitable and we’re bootstrapped.

Now on the other hand, maybe the point is that money accelerates things. Maybe you can do things more quickly than you could do otherwise. But my experience is that markets evolve often at their own pace, not necessarily at the pace at which capital is deployed into them. But it’s an ongoing debate.

Thanks so much for listening. A reminder, if you haven’t signed up to go to Unleash, please do that. We’ve got Guy Raz there, podcaster and author of How I Built This. We’ve also got Carey Lohrenz.

Outreach always puts on amazing events, so come save your seat for this high-energy event at Unleash.Outreach.io.

You can reach out to me at Linkedin.com/in/Samfjacobs.

Otherwise, I’ll talk to you next time.