We’re all hearing lots about it lately.

But what I’m not seeing are very many tactics on it. I thought I’d fix that.

Consider this your No-BS, leave-the-fluff-behind guide to things you can start doing today to multi-thread your deals.

But hold up, Andrew. What is a multi-threaded deal?

The concept is simple. We all know it: nine times out of ten, you have to pull in multiple stakeholders to get a deal across the line.

No deal in mid-market or enterprise gets done with just one person. Sure, you can have a champion. But unless this champion is a unicorn, it ain’t going to happen with them simply socializing your value prop around.

What is a multi-thread sales deal?

Multi-threading a sales deal means that you involve as many relevant stakeholders as necessary to get the deal done. You get multiple people at your organization in touch with people at the company you’re prospecting.

Your bigger deals ain’t going to get done without it. I can give you some fluffy stats on how X percent of successful deals involve 8, 9, or a hundred people.

But, let’s not go there. (If you want to dive in, check out this article).

Instead, do this exercise:

Think about your own organization when someone is trying to sell a product to your team. Does one AE get that done alone?

Enough of the fluff, let’s get into the tactics.

Phase 1: It All Starts with Discovery

Take the time to understand whether your solution solves a problem that is Priority #58 or Priority #10 for your ICP. If you are priority #10, you’re doing pretty good.

Here’s an approach on how to run a discovery call:

You can spend hours researching a company. Here’s what is most useful from a multi-threading perspective:

For small deals, this could take 5-10 minutes. For larger deals, count on hours.

Here’s a blurb you can use:

“Based on what I’ve seen, you all are focused on X and Y. We do a lot of work with <customer>, so I’m really looking forward to conversation. But first, each organization we work with has different priorities — and obviously with COVID there are a lot of moving pieces. I want to spend 5-10 minutes doing a quick high level overview to understand those nuances. Then, we’ll spend a bulk of time talking about Outreach. And if it seems like a fit, we can talk about next steps. Does that work for you?”

#3: Understand roles and responsibilities of the individual

Use this blurb to frame your question:

“I work with many <persona> who typically focus on X and Y to lead the agenda. Now I’m curious, what are your top two priorities as <persona>?”

#4: Understand roles and responsibilities of the department

After you get through the individual priorities, ask something along the lines of:

#5: Get into the tactics

Us sales reps tend to love speaking to “how-to” tactical items. If you start off on this front, Lily the VP is going to push you off to Henry the Manager. Only get into tactics once you understand (you guessed it) the prospect’s priorities.

Here’s how you get into the tactics:

“Lily, I now understand your own priorities are X and Y, and the priorities of the department are A and B. Let me ask, what are you doing today to handle these items?”

This is where your multi-threading journey really begins.

You are the expert. You know how deals get done. You know who is typically involved. And in step one you did your homework (right?), so you already know who the other potential stakeholders are.

That’s it. You know who you have to get to. You just have to call it out.

If you took my advice from above (and, let’s be honest, get a little lucky), the person you did the discovery call with brought in some other stakeholders.

But what do you do for the demo?

This will all look familiar.

Look familiar? That’s because it is!

The important part here is calling out the fact that part of the process is you connecting them to people at their level in your own organization. They’ll appreciate it, I promise.

*Side note: if these were Directors or Managers, it would be the same approach. Adjust accordingly.

The connection of VP to VP, Director to Director, or Manager to Manager.

At the end of the demo, you’ll want to call out (again) that you are going to connect each VP to their counterpart at your organization.

Phase 3: Prep Your VPs for the Conversation

Have them also set next steps:

“Joe, enjoyed the conversation from a VP to another VP. Typically, I set up a follow-up conversation with the VPs I speak to. That way, I can be a resource as you go through this journey of evaluating XYZ.”

Now, at the very least, iit won’t be a surprise when something goes awry later in the deal and you need your VP to reach out to the prospective VP.

Rinse. Repeat. Make it your own.

Before we go, one last thing.

Starting the process too late

The most common mistake I see is people trying to multi-thread when the deal is going down hill. I’ve done it multiple times. It never works. Your prospects are human — and they’re not stupid. They’ll understand why you are suddenly emailing every VP.

That’s why it all starts with discovery.

Not connecting people at similar levels

Don’t try and handle relationships with multiple people by yourself. And avoid connecting a VP with a Director. VPs want to speak to other VPs.

Conversation stops after champions bring in others

This one drives me bonkers. The goal of your champion bringing in other stakeholders should be to set up separate 1:1 conversations with those stakeholders.

Just because the other stakeholders were on one demo with you does not mean you are multi-threaded.

This one’s the biggest.

You don’t give people a product; you solve business problems. You’ll set your VP up for failure in conversation with the prospective VP if you don’t understand business priorities.

Not knowing when to move on

VP of XYZ doesn’t think they have a problem.

VP of XYZ thinks the problem you solve is Priority #101.

VP of XYZ thinks the business has too many software licenses.

This is just a starting point.

Take it and make it your own. Add your own style and flavor. And, if you find something that works for you, email me: andrew.mewborn {at} Outreach.io. 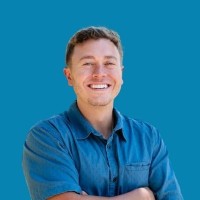 The 7-Sentence Product Demo Framework: How Storytelling Sells Your Product 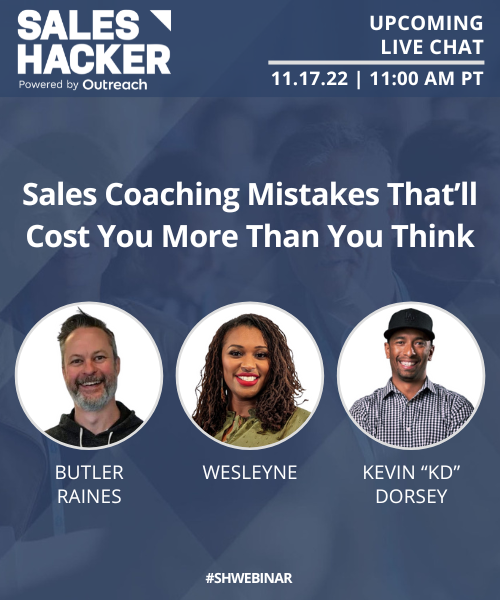