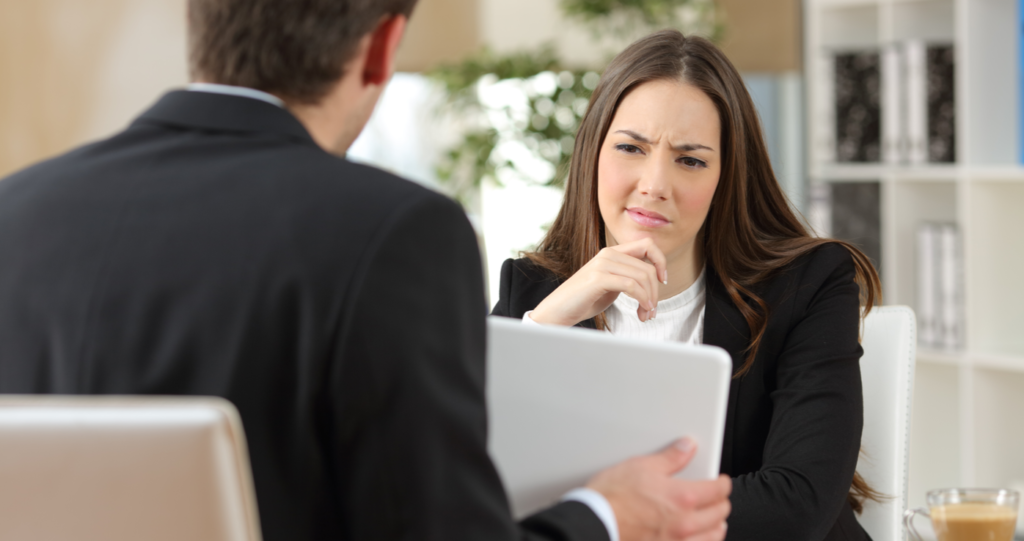 I have bad news…

Deals aren’t qualified just the one time and then locked down as golden opportunities forever more; they need to be constantly tested and retested, with the goal of exiting (either one direction or the other) as soon as possible.

My team and I interviewed 50+ sales leaders at companies like Dell, Workday, Oracle, and Cornerstone. Based on what we learned, it’s clear the best sales teams practice proactive disqualification (DQ).

In short, disqualifying prospects as soon as it’s clear the deal won’t close.

These leaders shared their recommendations for knowing when to kick an opportunity to the curb and how to build proactive disqualification into a sales process. And in this article, I’m going to share everything I learned.

Let’s Start With Why Disqualifying Prospects Is Important

Every sales leader we interviewed affirmed that losing fast was a key plank of their pipeline management strategy. The only trouble was, reps’ happy ears meant bad deals stayed in play.

In other words, when prospects say, ”Hmm, interesting,” and reps hear, “Sold!” they end up spending months on a deal — only to discover at the last minute that, in reality, there is no deal.

The fallout is real: The team doesn’t have enough time to make up the loss, so they miss their forecast without any advance warning to the rest of the company — the very worst thing a sales team can do.

That’s bad, but it gets worse…

This is not just about the reps. Several leaders highlighted that in later stages of deals, other departments are often brought in to work on a detailed needs analysis or help onboard a pilot. Those actions have hard costs even beyond the costs of missing revenue targets. And that’s the stuff that gets sales leaders fired.

So how do the best salespeople know which deals to kick to the curb and which to keep in the pipeline?

Keep reading to learn how Proactive Ongoing DQ works, and how you can implement it with your team.

An Overview of Proactive Ongoing DQ

By far the most common class of red flags is based on prospects going dark. It’s popular because it’s easy to implement in a Salesforce report, but the risk is that you’re not looking at why the prospect went dark.

For example, maybe your reps weren’t talking to the right decision-makers or they failed to connect your solution to a high-value initiative that already has your buyers’ attention.

So yes, “gone dark” is a proxy for disqualified, but it’s a rough proxy.

Rather than relying on the reactive (i.e., the prospect didn’t get back to me), a better way to flag a potential bad deal is to analyze your successful ones and compare where the current deal is in relation to that ideal.

This doesn’t have to be complicated.

Our favorite indicators come straight from a buyer-centric sales framework, but if you have your own process, then use those stages and key data points instead.

Either way, the new idea is to expect increasingly detailed knowledge at each stage. Then in deal review, you can say, “If we don’t know detail X by stage Y, then historically this deal isn’t going anywhere,” and you can make the rational case to disqualify and start prospecting to refill your pipe. 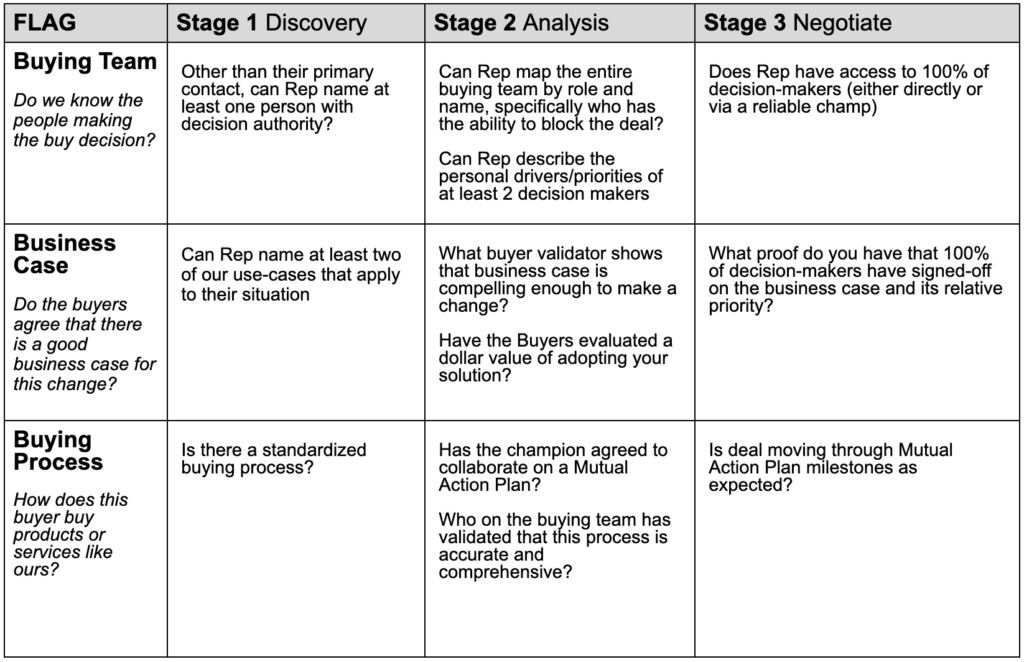 Given the costs of failing to disqualify bad deals, organizations need to be proactive in building disqualification into their process.

The obvious response is to implement exit requirements in Salesforce, but our research showed the best teams, instead, focus on training both the reps and the managers to be consistent, dispassionate disqualifiers using a team-wide DQ rubric.

Several companies add “exit criteria” fields in each SFDC opportunity stage that must be populated before the deal stage can advance.

Of course, this motion is best when you have a predictable buying process.

For example, in early discovery early stages, you might require a rep to establish that there is both need and budget availability. But in order to advance to a negotiation stage, the rep must have a documented business case AND the prospect and economic decision maker must have both signed off that the business case is accurate and a high priority.

It’s appropriate to expect increasingly detailed deal data points as a deal progress through stages. However, best practice says failure to fill in all the fields should only result in a flag, not a lock preventing stage advancement.

If you do mandate that all fields be filled in before a deal can progress, reps will just stick in bogus data to advance the stage — which is worse than no data at all. And unless the manager is looking at every field of every stage of every deal, reps will get away with it.

The result? They’ll be chasing a deal they should have DQ’d.

The most consistent insight we got from sales leaders is how influential Management’s attitude is in driving rep behavior.

If management is looking for a fat pipeline chock full of opportunities, reps will oblige and keep all their trash in a distracting and time-sucking category of “gone dark but you never know.”

On the other hand, if management wants to see ultra-high conversion rates, then reps will oblige and kill all but the most certain deals, leaving revenue on the table.

The best managers share their DQ criteria, so reps and managers can make rational decisions to flag and disqualify deals.

This can look like the approach we outlined above, using SFDC fields, or it can be as simple as a one-page sheet with key activities or data points that should be completed.

The takeaway, though, is a mutual understanding of what a good deal looks like, and when it’s OK to kick a deal to the curb.

Shared understanding makes it less risky for reps and managers to make DQ decisions, but more importantly, it operationalizes your process. As a result, there’s consistency as you scale, and your forecast remains accurate and defensible.

The Best Approach: Training Reps Who Want To DQ

Carrots and sticks have their place, but educating your reps around why proactive DQ is a good idea means they’ll want it to make it happen. That’s going to be far more effective than external motivation.

The single biggest action you can take as a manager to prevent reps holding on to bad deals is to give them enough good leads.

If they don’t have new leads, reps will just work what they have, even if it’s a dead horse.

NOTE: you don’t necessarily have to be feeding them leads. Plenty of AEs carry a self-prospected quota on top of the leads their SDRs hand over.

Intellectually, reps understand that every minute spent on a bad deal is a minute not spent on a good deal, but putting a dollar value to those minutes will make the intellectual argument a lot more personal.

Take their annual quota, and divide it by 2000 to get an hourly quota. For example, a $1M quota works out to $500/hour. Every hour of every day.

More dramatic, do the same for the entire company’s goal. You end up with staggeringly huge numbers due every hour of every day.

That’s where Proactive Disqualification comes in.

You don’t have to live with paralyzing panic when you’re falling short of your targets. Instead, you can use Proactive Disqualification to flip the situation. And it’s as simple as disqualifying a deal just a couple of days earlier than you would have normally. Proactive DQ can give you 8 hours of free time to work on a new deal.

Here’s a calculator to work out how much time you’re wasting on bad deals, and the value of that time if it were spent either working the good deals harder or prospecting new deals. 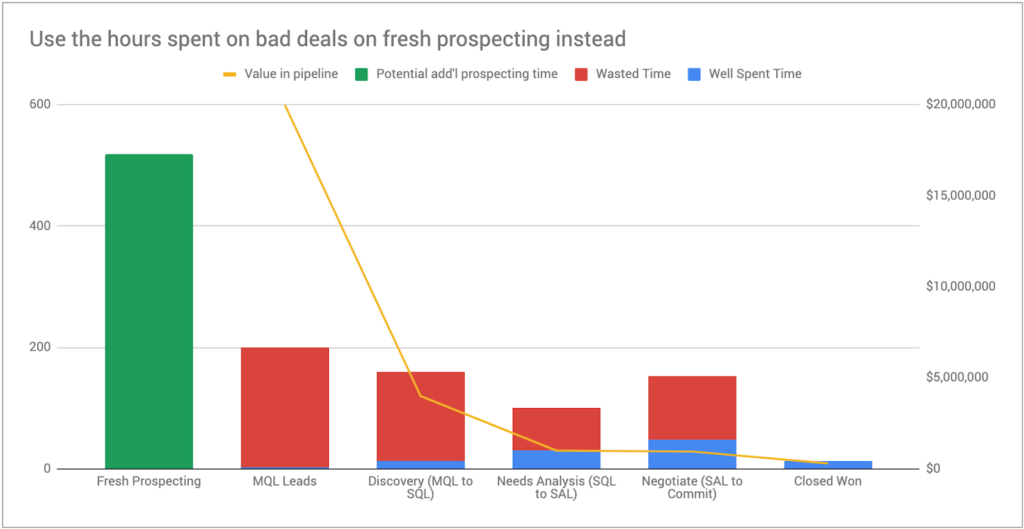 (Yes, this math is a little bit dodgy, but if we were only allowed to use accurate math, the sales consulting / thought leader business would have shut down long ago.)

Finally, when you’re presenting this to your team, be sure to include their commission on the additional revenue.

You should already be emphasizing the importance of being a trusted advisor and not just a price-based order taker.

By saying no to a deal that’s not a good fit, you gain instant credibility in the eyes of the prospect — both as an honest person and as someone who truly understands their business and has their interests at heart.

While recommending a competitor as the right provider might be a step too far, saying “no” makes it more likely that next time you’ll be the first person your prospect calls to evaluate their needs. Hopefully, that time you do have a solution that will help.

Everyone we spoke to agrees that reps should be more proactive in disqualifying bad deals, but too many companies let individual reps take responsibility on their own — or, at the other extreme, build out automated gates on stages, tempting reps to enter garbage data into the CRM.

The Key Is Increasing Knowledge at Every Stage

If your reps have the answers, you’ve got a good looking deal. If they don’t, make it easy to kick that time-sucker to the curb and free up your reps to replenish their pipe and work the deals that need to be worked.

Do you have a favorite DQ question? Share it in the comments along with the stage you expect that data point to be known. Tom Williams is the co-founder of DealPoint, the first sales platform for customer-centric sales teams. DealPoint ensures reps and their prospects are perfectly aligned, reducing risk for buyers and sellers, driving a better buying experience and a higher close-win rate.

A Brit based in Portland, Tom plays squash, parents his two boys and talks about sales process at parties. Well, he used to before the lockdown. But we’ll be back at it before you know it.

The Three Most Effective (Dis)Qualifying Questions You Can Ask