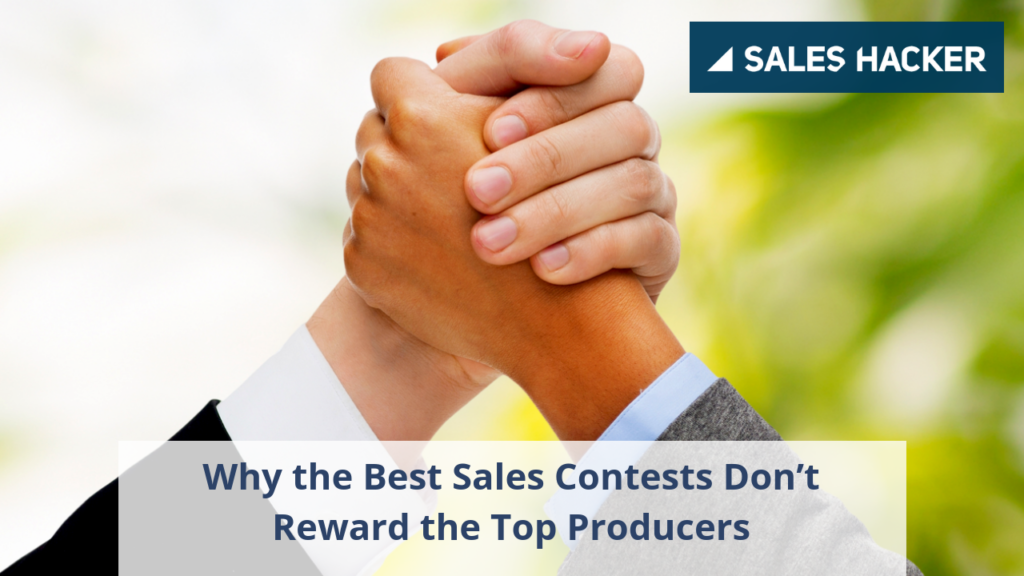 In this post, I’ll share my biggest takeaways on how to put together sales contests or motivational sales games that drive excitement and superlative results — plus, my 12 favorite sales contest ideas.

How to create a good sales contest

Research shows that creating healthy competition within sales teams can substantially increase results, and contest ideas to motivate employees is a great way to do that.

I know – you don’t need me to provide proof that salespeople are competitive!

Sales contests are the most obvious way to ignite that competitive spirit, but they shouldn’t be about elevating one individual over another.

Running effective sales contests is all about pushing the entire team to reach collective new heights. To do this, you must keep in mind that the three main goals of a sales contest are:

Notice that none of these goals have anything to do with driving more sales directly.  In fact, “sell the most” sales contests usually have a negative effect on all three of the goals above.

Easily the biggest misconception about sales contests is that they should reward the top-selling rep.

In fact, the worst sales games are created around the premise of “most revenue in a month wins X.”

Put yourself in the shoes of a new sales rep or someone that is struggling to produce on a consistent basis. It’s the first day of the month and your manager is visibly excited to roll out the new workplace contest idea. As usual, the parameters are around selling more than everyone else to win. The manager thinks the prize, a new 4K TV, will motivate everyone to work hard and the competitive spirit between the reps will lead to a record sales month.

The likely scenario: The top reps who always do well will pull ahead in the first week. The remaining reps, whose production you actually need to improve, will fall hopelessly behind when they realize they have no real chance of winning.

The rich get richer and you just gave an expensive prize to a rep that was going to have a great month anyway. Why bother running a sales contest at all?

You should already have mechanisms in place to incentivize excellence, like a “BDR of the Month” award or an “Account Executive of the Quarter” trophy.

Activity is the great equalizer. It rewards hard work, not talent, and anyone can work hard. If you’re new or struggling, it’s much easier to stay in contention in a workplace competition when you’re judged on booking demos, making a lot of dials, or passing over qualified leads to account executives (or any other top-of-the-funnel activity).

A secondary benefit to structuring workplace games this way is that activity-based contests “shake the tree” of your top-performing reps. Elite reps who are benefiting from strong sales pipelines and a mastery of your sales process have gotten so efficient they’ve forgotten what it means to hustle. But if they want to be competitive in an activity-based sales contest, they’ll need to do the legwork.

Keep all your staff engaged: ask them to come up with fun sales contest ideas

You want everyone to feel they have a chance to participate, all the way through, but for better performance to be rewarded. You also want to encourage teamwork and mentoring. Can you reward top performers for how well other members of their group do in these motivational workplace contests, and encourage them to mentor more junior reps?

Or maybe you offer tickets for a lottery. Better performers get more tickets, but everyone gets to play. Since no one finds out the winner until they end of the contest, everyone’s motivated to get stuck in.

Okay, with all that in mind, what does a good contest actually look like? I’ll kick off with a recent real life example, then we’ll look at some other ideas.

I recently designed a contest for my BDR team around the number of qualified opportunities accepted by the account executives. To introduce luck, I went online and bought a cheap plastic roulette wheel. I explained to the reps that every time an account executive takes a demo into their pipe, they get to spin the roulette wheel. Whatever number they landed on was then converted into the number of poker chips they earned.

When a “game of chance”  like this accompanied each individual activity, the BDRs were unusually driven to book demos just so they could spin the wheel. While they were having fun, I was basking in a flurry of activity that ultimately leads to more sales.

Then at the end of the month, all the BDRs took their chips to a no-limit poker table and the person left standing won (and I can assure you, they were not my best rep).

I can’t over overstate the benefit to company morale when everyone was watching me deal the final hand and cheering on the underdog.  All it takes is one successfully run contest to get everyone excited for what you’ll do next.

The premise here is simple. The rep who gets the most nos in the month wins the game.

This is a game where everyone can get stuck in, because it rewards rejection and it helps reps who get disheartened when something goes wrong. As a bonus, it might help get rid of some of those deals clogging up the funnel which were never going anywhere.

The great thing about daily competitions is they’re pretty random. Anyone can win the most dials in a day competition if they really put the work in. You can hold them in days and weeks when things are starting to flag to get a bit more motivation going. Just buy some random presents, leave them in a pile, and whoever gets the most deals on a given day gets to open them. No one has any idea what’s in any of the boxes. It could be a great gift. It could be rubbish.

For extra competitiveness, allow reps to choose whether to keep the gift or steal yesterday’s prize from one of their teammates.

This works best as a whole-team competition, and again, it’s a great motivator for the slow days when sales drop off. There’s a good chance that your staff are all pretending to work by 3pm on a Friday anyway, so you may not be losing much.

The premise is pretty simple. Hit a predetermined target across a team or the whole department, and you get to clock off early and go for a drink. With a bit of luck you’ll get your reps egging one another one to get over the line and achieve superhuman feats, all together, so they can be the first ones out of the door.

This is one that’s targeted at the less successful sellers. It’s an incredibly simple idea. The reps who move up the most places in the league table, or outscore their PB by the largest amount, is the one who gets the win.

Similar to above, but pair or group your reps. Put top performers with reps who are new, or who’ve found it a bit tricky. Hand out rewards not for overall performance, but for improved performance. Reps get points for their team mate’s improvement. But since the top reps can’t improve much, they’ll need their team mate to move up the league table in order to win. With luck, your expert reps will share their expertise and skills with more junior staffers, and you’ll see the new people build new skills.

This isn’t a competition, exactly – more of a target. It works best for businesses where there are high-volume days. We know that a lot of people aim for quota each month. New York taxi drivers work more hours on sunny days, even though it’s easier to make money when it’s raining.

So when there’s a high volume period, let staff bank some time off. If they hit certain targets during this period, then next time there’s a time you know will be quiet, they get a snooze button, and they can stroll into the office at 10.30am.

Another one to keep teams engaged for longer. Rather than simply rewarding the most sales, or the most dials, set a bunch of different targets your teams have to hit.

This is particularly good if you’re keen to push reps out of their comfort zone and into new territories. You can say that they need to get a deal in California, or from a company over a certain size. And you can set a bunch of different targets so that everyone has to expand their range.

9. The “above and beyond” prize

There’s something to be said for not telling reps that there’s a contest going on at all. Or telling them there’s a contest but not the rules. Or get the reps themselves to nominate each other for “above and beyond” prizes that identify someone who did something really cool.

This is a competition designed to help the staff share best practice. It does encourage high performers, but in a way that benefits others, too. Staff submit their best emails, or their best tactics for closing, or anything which might encourage peer learning. The other staff vote on what they think is the most effectively personalized email, or the most persuasive pitch, or whatever metric you’re interested in. Whoever is voted to have the most golden tongue gets to wear Shakespeare’s doublet, or gets the golden quill.

Fantasy football drafts your reps into teams, just like in fantasy football. Each of them gets different metrics, depending on their job role – just like yards, catches, interceptions. The teams should be structured to get as equal a weighting as possible, and then pair them head to head once a week. The winner gets a prize, sure, but really they get to beat their buddies. And because everyone on the team is depending on everyone else on the team, they all have to go really hard.

This is pretty similar to the poker prize we started with. Every time your team makes a certain number of sales, you get a go at the lucky dip. There are loads of prizes in there. A few are rubbish. A couple are really good. The team have no idea what they’re going to get.

When I was an individual contributor at the start of my career, I was involved in many “sell the most” contests.  I experienced first-hand how ineffective they were and vowed to never repeat those mistakes if I were to lead a team of my own.

Once I earned a promotion to management, I put an end to contests designed around the end result – why give more to the best reps only to demotivate the rest of the team?

From my experience, contests that revolve around playing games with top-of-the-funnel activity are a high tide that raises all boats – everyone is engaged throughout the competition, team morale soars, and most importantly, you’ll get an appreciable bump in results.

This is what has worked for me and why I don’t design contests that only reward top producers. Do you agree? Awesome. Disagree violently? Even better. Weigh-in in the comments and let me know what innovative contest ideas have worked for you!