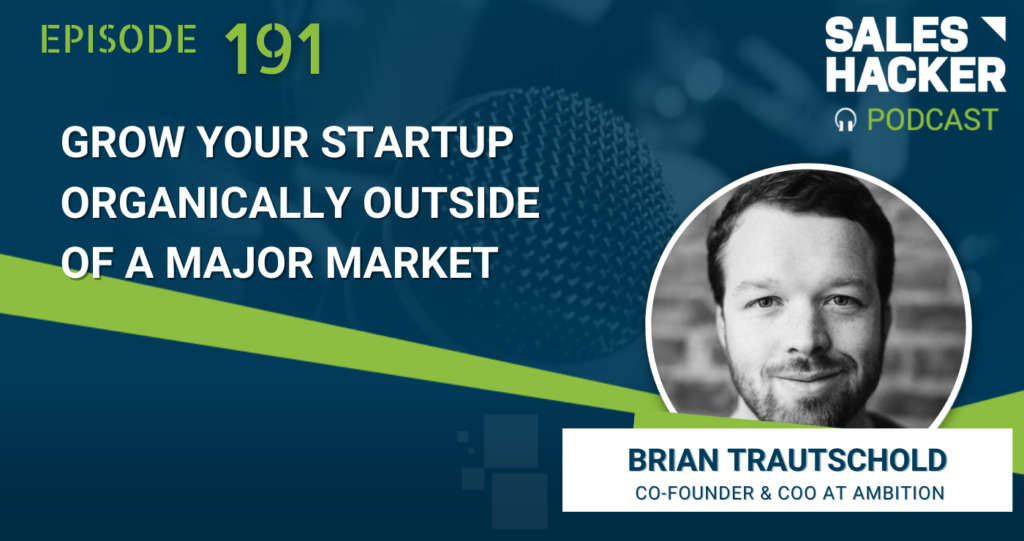 In this episode of the Sales Hacker Podcast, we have Brian Trautschold, Cofounder and COO at Ambition, a 10-year-old sales gamification startup based in Tennessee, not the Bay Area or Atlanta. Join us for an inspiring conversation about perseverance and organic growth outside of a major market.

If you missed episode #190, check it out here: How to Control Your Internal Brand with David “Hersh” Hershenson

Sam Jacobs: Today on the show we’ve got Brian Trautschold, the Co-Founder and COO of Ambition. They’re helping companies enhance and define their culture through better sales coaching, sales gamification, and building an ecosystem of encouragement.

Before we get there, three sponsors to tell you about. The first is Outreach. Outreach is the only engagement and intelligence platform built by revenue innovators for revenue innovators. Replace manual processes with real time guidance and unlock actionable customer intelligence. Traditional tools don’t work in a hybrid sales world. Find out why Outreach is the right solution at click.outreach.io/30mpc.

We’re also brought to you by Pavilion. Pavilion is the key to getting more of your career. Our private membership gives you access to thousands of like-minded peers and courses through Pavilion University. This December, Pavilion is partnering with Ecology to plant 50,000 trees and remove some carbon from the atmosphere. For every member that joins that’s referred by another member we’ll plant 250 trees per person.

Finally, Vidyard. Vidyard is the best way to sell in a virtual world. Record your webcam, your screen, or both to make prospecting videos, follow ups, product demos, and other communication that drives virtual selling. Try Vidyard for free by signing up at vidyard.com/free.

We’re incredibly excited to have Brian Trautschold, the Co-Founder and the Chief Operating Officer at Ambition, an exciting company based out of Chattanooga, Tennessee. It’s the leading sales gamification and coaching platform.

He’s co-founded two other companies besides Ambition, and he’s also an Angel investor and supports the Tennessee and the Southeastern startup ecosystem.

Brian, welcome to the show. We want to give you an opportunity to tell us a bit about Ambition. We call that your baseball card, tell us about the company, the context and background.

Brian Trautschold: I started my career as a sales rep, a hustler on the phone, making a lot of dials for a really large technology company. 12 years ago the systems in place to manage people, to recognize people, to ensure high performance, were really lacking. You’ve got these traditional sets of training programs, you’ve got archaic reporting in a lot of organizations. You’ve got the gong sitting on the manager’s desk, with the mallet next to it. As a young person coming out of college, it was shocking.

At Ambition, we believe people have potential. We’re trying to unlock that, especially people facing the customers, because as our customers understand, that’s where the magic happens. If you can get those people to be excited, motivated, engaged, continually developing, they’re going to grow your business and they’re going to be great champions for your customers.

We do that with software and a series of tools to help managers and sales leaders drive the performance of those reps and make sure they stay with the company.

Sam Jacobs: Where is the company in its growth trajectory?

Brian Trautschold: We’re in one of those periods of rapid growth and rapid change. I think we came into 2021 with around 43 people. Today, there are 81 people

In the middle of 2020 things were scary as it was for everyone, a lot was happening and changing. As people have gone remote or hybrid, we’re figuring out how to put in place new coaching processes, new ways to engage their employees.

We’re closing in on some major milestones. We raised $15 million from a grand equity firm called Primus Capital based in Atlanta, and over $21 million total. It’s time to pour more fuel into that fire.

Sam Jacobs: Walk through the peaks and valleys of the journey and specifically how the vision or the value proposition has expanded.

Brian Trautschold: One of the things we have in spades is perseverance. That gives us an edge in a lot of ways, it’s in our DNA at this point.

It’s the need to have a sustainable platform that every revenue team is living and breathing.

Gamification is great. Gamification as a concept is extremely powerful, as a Peloton rider, as a person who checks their Apple Watch, all those things are gamified. I check my Delta SkyMiles every week. That’s gamification in practice. The reality though is that gamification and creating that engagement is just one tool in the toolkit or one arrow in the quiver.

What we believe is that there’s a lot bigger problems to solve. When we built Ambition originally, we built a really powerful, smart metric processing engine, a nerdy way of saying we can take in data about what your reps are doing in a variety of different places.

Salesforce CRM, Salesloft, or Outreach, that could be Gong, whatever it is, we can bring in the data from those and give you a holistic view of performance centered around the actual individuals, and their goals and objectives.

Early stage, we’re building this gamification platform, powering contests around a series of metrics, and we had to build this robust data platform. We have insights and context to their performance that people care about and credit to the customers.

As we served more folks in the enterprise and upper mid market space, we realized how much value we added to those businesses. This journey has been driven by the voice of the customer and us trying to continually solve problems for the people who manage teams with distinct metrics. Give more tools to the frontline manager to make changes, to drive the outcome, because they want their reps to be successful. They need actionable insights and tools to do that.

Advantages to growth outside a major market [15:30]

Sam Jacobs: You’re committed to the Chattanooga startup scene. What has it been like building a company?

Brian Trautschold: We’re isolated, but not completely cut off from humankind. One of the things that was very useful — Ambition went through Y Combinator in 2014, we raised a seed round coming out of that. We had a lot of momentum.

One of the best things that we ever did was walking around with Paul Graham. In Mountain View, during the YC program and while raising the seed round, he had two relevant things to say. One, ‘if you’re not going to buy the domain ambition.com just change the name.’ Today, a lot of people have not .com domains, but in 2014, that was shocking advice. The other was, “You’ve got people still in Chattanooga. When are you going to move the company here?”

We realized we don’t need to move the company here. We serve customers outside the Bay Area. Our early customers were in middle America. They don’t care where our office is. It allowed us to not have the pressure to raise a ton of money and have a ton of growth right out the gate. We could build and marinate on what was working.

Moving to San Francisco versus staying in Chattanooga would’ve been much more expensive. We would’ve had a higher degree of pressure to find immediate success and product market fit. It takes time to build a platform that’s robust and extremely flexible.

You start winning enterprise customers. You have these large, long term contracts and start realizing there’s more we could do with this customer. You need to invest in engineering, customer support, and customer success.

Sam Jacobs: What advice do you give to companies that are struggling to figure out, remote vs hybrid? How does Ambition help solve that problem?

Brian Trautschold: I think you’ve got to read the room on your employees and be safe, whatever the case may be. We’re serving really large customers, Fortune 500 customers who have thousands of sellers typically globally. Most used to be in an onsite model, have sales centers globally.

If you’ve been in sales for more than a few years, you’ve seen it. It was the boiler room model. The boiler room model had a lot of rituals that even today we rely on for managing and coaching salespeople. The big open floor plan with lots of people on the phone. You hear how calls are going. You can have a debrief with someone right away. Positive reinforcement is very easy. Those things are all gone.

You used to go get coffee or you say, “I want to do a quick check in with someone.” Those rituals don’t work anymore. Management has to change. That sense of being a part of something and being aligned to the organization has really changed.

When we talk about the culture, it can’t be forced. No one wants that. We have to utilize the tools we have. We have to automate, be smarter about it.

Now that’s happening virtually and we’re creating this awareness, a sense of recognition, and an ecosystem of encouragement.

Way beyond sales revenue, the whole company’s tuning in. They’re reacting, collaborating, and celebrating each other’s success. It feels more of a cohesive environment.

We’re trying to work with companies to create cohesion, to let people act on those things, high five their teammates, whether it’s virtual or in real life. That’s really important.

Sam Jacobs: One of the things we like to do is pay it forward — people or books or ideas or podcasts that have influenced you that you think we should know about.

Brian Trautschold: John Barrows has an amazing podcast. Paul Graham is amazing too. Fred Wilson is a great writer. I just read Winners Dream, which is by Bill McDermott, who’s the CEO of ServiceNow. It’s inspiring, a lot of practical advice.

Sam Jacobs: What’s the best way to get in touch?

First of all, perseverance. They’ve been doing this for a long time and now they’re seeing growth past 10 million in ARR on the way to 20. It’s a testament to perseverance, to sticking with it.

Number two, because they weren’t based in a major market, they were able to keep costs slow and grow organically. They didn’t move to the Bay Area, New York City, or Atlanta. They’re all in Chattanooga, drinking bourbon and writing lines of code and encouraging reps to do better.

In this remote world where we’ve all got access to wifi, computers, and technology, there’s lots of places to build a company now. One of the benefits is to keep your cost low, which gives time to find product market fit.

Finally, an ecosystem of encouragement. How do you maintain culture in a remote world? Celebrate people and build triggers and notifications so you can praise people. Everybody needs praise. Everybody needs to be motivated.

If you want to reach me, you can on LinkedIn, or email me, sam@joinpavilion.com.

Remember to give us five stars on wherever you find your podcast. Make some time to step back, to take stock of what you did in 2021. And hopefully look ahead to an even better 2022.