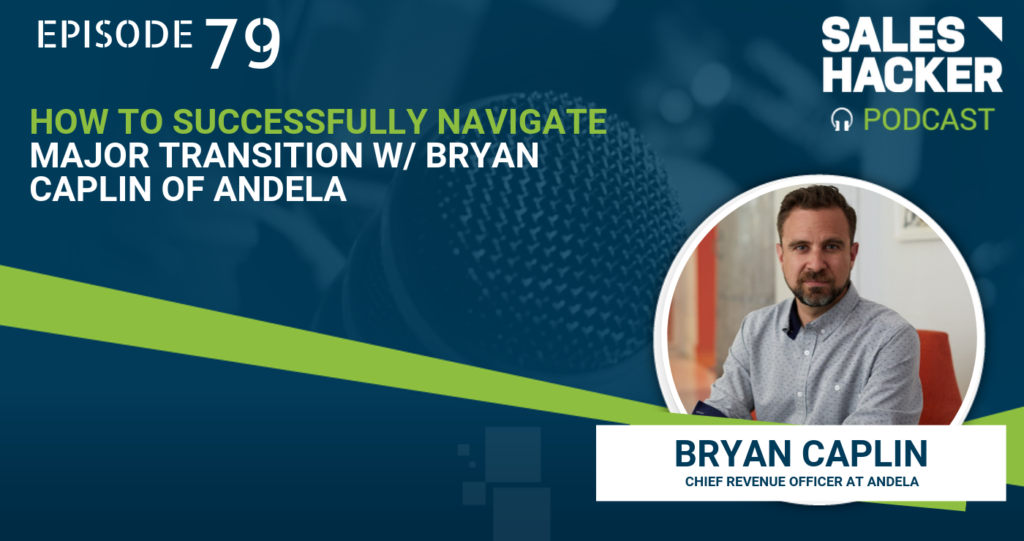 This week on the Sales Hacker podcast, we talk to Bryan Caplin, CRO of Andela.

Bryan recently left Axiom as GM and Head of North American Sales and Marketing of Axiom to join Andela as CRO. He talks us through that transition–knowing when was the right time to leave, his criteria for evaluating a new company, and what he did in the first 30, 60, 90 days as a new executive.

If you missed episode 78, check it out here: PODCAST 78: What this Google Exec Wants You to Know About Success w/ Alison Wagonfeld of Google Cloud

Sam Jacobs: Hey, everybody. It’s Sam Jacobs. Welcome to The Sales Hacker Podcast. We’ve got a great show with a very good friend of mine today, Bryan Caplin, the new Chief Revenue Officer of Andela. He spent the last 19 years at just two companies, Corporate Executive Board and Axiom. And he left Axiom recently as the General Manager and head of North American Sales and Marketing to join Andela as CRO. And so we’re going to be talking about that transition

Now before we get there, we want to thank our sponsors. We’ve got a new sponsor on the show today, Vidyard. Now email isn’t dead, but man is it boring. Add video to emails to stand out in the inbox, for free, with Vidyard. Vidyard helps you easily record, send and track who is viewing your video content in three easy steps. Go to vidyard.com/saleshacker for more information.

Our second sponsor is Outreach, the leading sales engagement platform that enables sales reps to humanize their communications at scale, from automating the soul-sucking manual work that eats up selling time to providing action-oriented tips on what communications are working best. Outreach has your back.

Now, without further ado, my interview with Bryan Caplin of Andela.

About Bryan Caplin and Andela

Sam Jacobs: Today, I am delighted and excited to have a good friend of mine on the show. Today, we’ve got Bryan Caplin. Bryan is the newly appointed Chief Revenue Officer of a company called Andela. Bryan has a long and storied career as a sales manager, sales leader and commercial leader, both in the New York tech system and ecosystem, but also abroad in London and also in Washington, DC. Prior to his appointment as Chief Revenue Officer of Andela, he was the General Manager and Head of Sales for North America at Axiom, welcome to the show, Bryan.

Sam Jacobs: So you’re the new CRO of Andela. What is, who is, Andela?

Bryan Caplin: Andela is what I would call an engineering as a service company. We help technology leaders build distributed software engineering teams quickly and cost effectively so they can ship product faster. We have over 1,000 engineers based in the continent of Africa across five different countries and about 200 client facing individuals here in the U.S.

Sam Jacobs: How long have you been there?

Bryan Caplin: I’ve been here for a whopping one month. So drinking from the fire hose, as they say.

Choosing the Right Company for Longevity

Bryan Caplin: I can’t say that I thought I would be at either organization for nine and 10 years. I can say, in picking Axiom, and I think now the same with Andela, I went through a pretty thoughtful and disciplined process in evaluating the organization. I am a loyal guy, as you can see, so I’m looking for a place where I know I can grow. Obviously, so much of it is around the people. Who am I working for? Who am I working with? Will I be intellectually stimulated? Will I be challenged by them? Will I learn from them? Will I enjoy working with them?

In all my career, I’ve primarily worked at what I would call people based organizations or professional services organizations versus SaaS or tech. So even more so I think the onus is on the people you work with to have that experience. Ensuring that the fit is there from the start was really, really important. I’ve tended to focus on earlier stage high growth companies that have really strong product market fit.

You learn that through evaluation, through talking with the board members, talking with clients or past clients, etc. So I can see that there’s that runway for growth and I have chosen companies where I thought personally, there would be a lot of growth for me as well. Again, I didn’t think it would be a 10 year run, but every year, my job changed, the company changed, challenges changed, and that kept me really stimulated for a long time in both organizations.

The Healthy Approach to New Leadership

Sam Jacobs: Was there anything that you had to tell yourself emotionally or psychologically to adjust to a new boss (Jess Hunt)? How did you think about somebody coming over the top, from a hierarchy perspective, when maybe that was a job that you wanted to respond to?

Bryan Caplin: Look, I’d be lying if my first reaction wasn’t, “why not me?” And I think if you’re a high performing ambitious person, that’s probably your first reaction. At the same time, at least with Jess, I quickly saw an opportunity to learn from someone who had a pretty different skill set than I had, especially from a leadership perspective, from a change management perspective, from an operations perspective. And I went into that that relationship saying, “Okay, I’m going to give this a few months to see how this is going to work to see what I can learn from this individual.”

I think what was consistent in our relationship, in both organizations, is just the level of trust and respect for what we bring to the table, which is pretty rare, certainly something I try to enlist with all of my team members as well.

Sam Jacobs: You sort of said, “I’m going to support this person and that’s the mechanism through which my career will advance.”

And I think you have to look at every new boss as an opportunity to learn something new. If you’re not learning from your boss, and if you’re not teaching them things as well across the way, then I think that’s probably not the right fit.

Knowing When to Transition to New Opportunities

Sam Jacobs: One of the themes of this episode is transition. You were at Axiom for nine years… all of the companies that you worked for are outstanding companies, so this isn’t about one company’s bad versus one company’s good. It’s really about your personal growth. How did you know it was time to leave?

Bryan Caplin: It was one of the tougher decisions of my career. And I just took so much pride in building that company. I think it was a couple things for me. One, I felt like the team that I would be leaving behind was in a really good place. It was really important to me that when it was time for me to leave, the organization would continue to thrive and hopefully accelerate without me.

Two, as I thought about the things for me still to learn at Axiom and as I thought about the challenges in leading the next stage of growth across the size of organization versus going to an earlier stage venture backed organization that was doubling in size year over year, as I thought about okay, the next call it five to 10 years of my career, that was really exciting for me and obviously the opportunity to enter an organization as a C level executive as well was also exciting. So it was almost less about what was ahead of me at Axiom, more about kind of the other opportunities that were in front of me that that were really getting me charged up.

Sam Jacobs: What is your 30, 60, 90 plan? How do you approach that? So how does one enter an organization, there’s a fairly large and installed sales and kind of revenue organization? What’s your plan to, you have all of these people are looking to you, they probably have their guards up a little bit. What do you do over the first three to six months to set the path, set the course?

Bryan Caplin: I’ve broken it up into three components, which more or less align with the 30, 60, 90. The first 30 has just been people. I’m doing one-on- ones with every single person in the revenue organization. I’m really trying to understand everyone, their story, what’s working, what’s not. If they had a magic wand, what could they change? A lot of listening and trying not to jump to too many conclusions.

The next 30 days I think will be pretty operational, really understanding the KPIs, how do we measure success, the dashboards and tools that we’re using, our tech stack, just the kind of mechanics of the business, so to speak.

And then the final 30 days will be client facing. Meeting clients, listening to them, understanding what’s working, what’s not, potential clients to understand how we’re pitching Andela, what’s working, what’s not, just learning about our solution in greater depth, and then really hopefully from there, I can then start to move into a little bit of just what you might call business as usual and start to do some of the things that I think we need to do.

Sam Jacobs: Hey, everybody. It’s Sam Jacobs. This is Sam’s Corner. What a great interview with Bryan Caplin. He’s a good friend but also is just a thoughtful commercial leader. A couple points that I just want to reiterate with everybody.

The first is if you’re going to think about leaving jobs, you got to do your due diligence, and Bryan did a tremendous amount of due diligence when he decided to leave Axiom and join Andela. He didn’t feel like there was a huge barrier from moving from services sales to SaaS sales, but he made sure that he had a talk track and he explained why it wasn’t a barrier.

Second thing that we talked about is Bryan inherited a new boss when he was at Axiom, who had come in over top of him. So how do you deal with that? He said, when the company grows, you grow. Don’t worry about who’s over top of you and whether you get to continue to report to the CEO or the CRO and now you have to report to the VP of Sales or somebody else. The point is, is growth happening? Because if growth is happening, you’re going to have responsibility and new opportunities will emerge.

I hope you enjoyed the show. Before we go, let’s thank our sponsors. Outreach, the leading sales engagement platform and Vidyard. Vidyard helps you easily record, send, and track who is viewing your video content in real time in three easy steps. Email isn’t dead, but it sure is boring. Add video to your emails to stand out in the inbox with Vidyard.

If you want to reach out to me with feedback, you can reach me on LinkedIn. If you haven’t rated the show, please give us five stars on the iTunes rating system so that we can remain in business and continue to bring you this show.

As always, thanks so much for listening, I’ll talk to you next time.