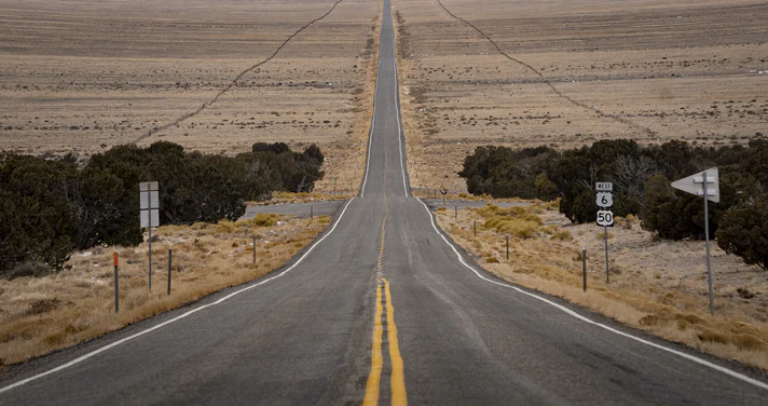 Two years ago my wife and I were winding through the mountains on a train back from Aguas Calientes, Peru. We had just seen Machu Picchu (a place which lives up to EVERY ounce of the hype. That place is stunning).

One of my wife’s work colleagues challenged me to a game of chess.

I happened to think I was pretty good, despite not having played in forever. Yep, the typical over-confident sales guy.

You can see where this is going.

In about 4 minutes and 35 seconds, I was scratching my head, wondering what happened. Not because I had my butt handed to me so promptly, but because I didn’t feel I had made a mistake at all!

My moves were a waste of time. His were backing me into a corner. Kind of like on a sales call. Most of the time you’re not sticking your foot in your mouth. But if what you say isn’t spectacular, you’re losing time. You’re losing tempo.

Tempo on the sales call and in the sales process is everything for us. It’s something I feel we do particularly well at Sisu. Here’s how.

We run a one-call close model. Last month we did 170 demos across three AEs. 97 of them closed on the first call. We’ll likely pick up another 10-20% this month, but the majority comes from that first call.

Even with this success, there was a time where we were tempted to move away from the model.

Our solution today vs. three years ago is at least two to three times more complex. With all these features it just starts to feel rushed. You feel like you need more time to talk about more features. We tried (very briefly) to break out discovery and demo into two separate calls.

Here are three reasons we quickly came back to the one-call close model.

We went back to the one-call close model and doubled down on one thing: simplicity.

A lot of great SDR leaders tell their team to sell the meeting with the AE, not the whole product.

We have a similar mindset as AEs. Build rapport and enough momentum for them to just get started. You can’t train them on every feature right away. You just need to build confidence in your solution for the prospect to open the door and take a big next step.

2. The Free Trial (The Lynchpin)

A lot of sales organizations view free trials and pilots as crutches that help the weak salesperson.

Maybe in some cases. Not for us. Free trials are our secret weapon. It’s the only reason this whole thing works.

Think about it. It breaks trust to get on a call with a prospect. Rave to them about how much your product will help them and how great it is only to tell them that they’re going to have to sign a contract and commit to a 365-day contract before logging in even once.

And if they push back, hit them with: “Your time with the AE is your time to figure out if the product is going to work for you”.

I’ve heard this line many times when I’m sitting on the other side of the table as the buyer, evaluating SaaS products for our team.

I hate it. I hate feeling like I have to beg to try the thing out after you just bragged to me about how great it is.

If your product is good, you should encourage free trials – not discourage them, paint them as crutches for the weak salesperson, or make your prospects beg for one.

We actually encourage our prospects not only to do a free trial but to start on a quarterly payment plan rather than a yearly. Here’s a close that our team uses frequently that has resulted in at least 1000 successful closes:

You’re probably wondering about pricing. Should we hop into that?

Now we want you to be able to try this for yourself before you make any decisions. Our normal trial length is seven days. If you’re looking to try this out, I’ll extend that trial for you until the end of the month. That gives you more time to test things out and see if it’s going to work for you.

Even then, that probably won’t be enough time to fully implement, so a lot of our clients will start on the quarterly payment plan. That lets you pay for 90 days before committing to a full year. Once you’re confident in it, you can switch to yearly and get a discount.

We’re lucky that we get to use this close because we have such an amazing product.

Three reasons it works so well:

This close is low pressure, high urgency. The second you use it, the free trial has already started… so they might as well get moving, right away!

Note here: we watch our trial>active conversion ratios pretty religiously. Usually, they sit anywhere from 80–90%. This was not the case when we did “no credit card” trials—those are just too low commitment from the prospect. All of our trials have a credit card and a set billing date that will move forward unless canceled.

3 actions that can shorten your sales cycle and increase conversion

Hopefully, you’ve found a couple of actionable items you can try out. We sell to SMB, but I do believe that this could even work with bigger deals. If nothing else, when paired with more of a land+expand strategy.

Here are some good places to start.

Play around with a free trial

At least for a segment of your reps, maybe the ones selling smaller deals. Just make sure it’s variable in length – may be a standard of seven days, but let your reps push it till the end of the month, one week from Monday, etc. so that they can manufacture urgency. Make sure it requires a credit card and set billing date. Watch those trial>active conversion rates closely. I bet you’ll be surprised that they’re higher than you think. We were.

Shorten the sales cycle with reps you enable free trials for

Maybe it’s cutting out a discovery call. Likely, it’s going to be preaching the importance of a credit card into a free trial on the first call. It’s totally doable. And the second and third demos (if necessary) will be more relevant because you’ll be talking to people who have actually experienced your product.

Experiment with different roles between sales, onboarding, and support teams

This is where we’re focused on improving today. The lines are often blurred here. We’ve just made our first Sales Engineer hire who will focus on trial>active conversion ratio, and on clients making their 90-day renewal payment/annual upgrade.

And finally, just a great mindset to have around sales cycle from one of my favorite follows on Linkedin: 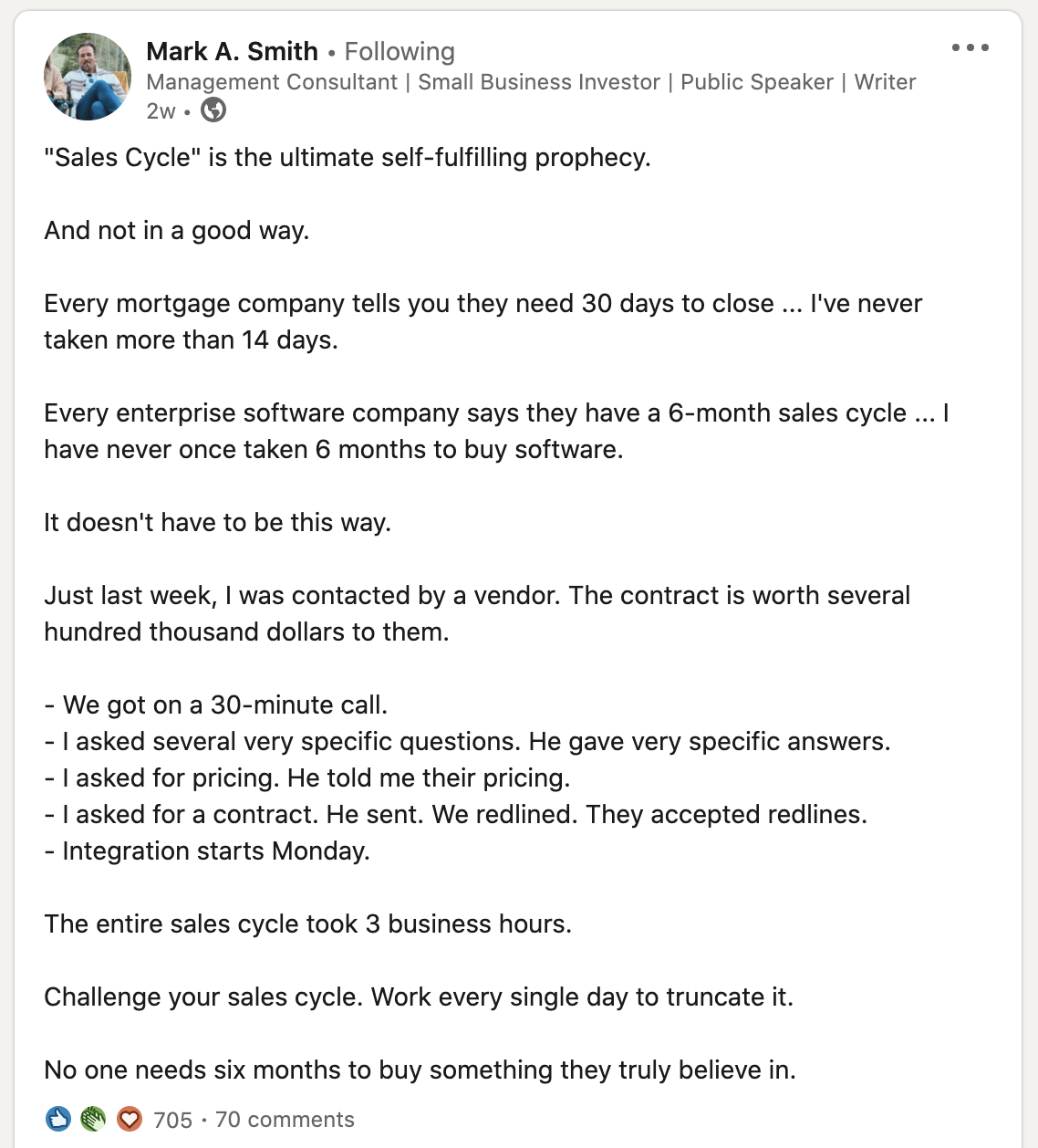 So, is your sales cycle long? Or are you making it long? Zac Muir
@sisuzac
Director of Marketing and Sales
Sisu.co
More from this author
How “Dwight” Became Our Sales Team Assistant and Made Demo Disposition Less Painful

3.5 Creative Tactics (and One Mega Strategy) to Generate Leads Without Boring, Blatant Self-Promotion

This Sequence Sat in Our CRM for Months. Then It Boosted Demos by 5%.