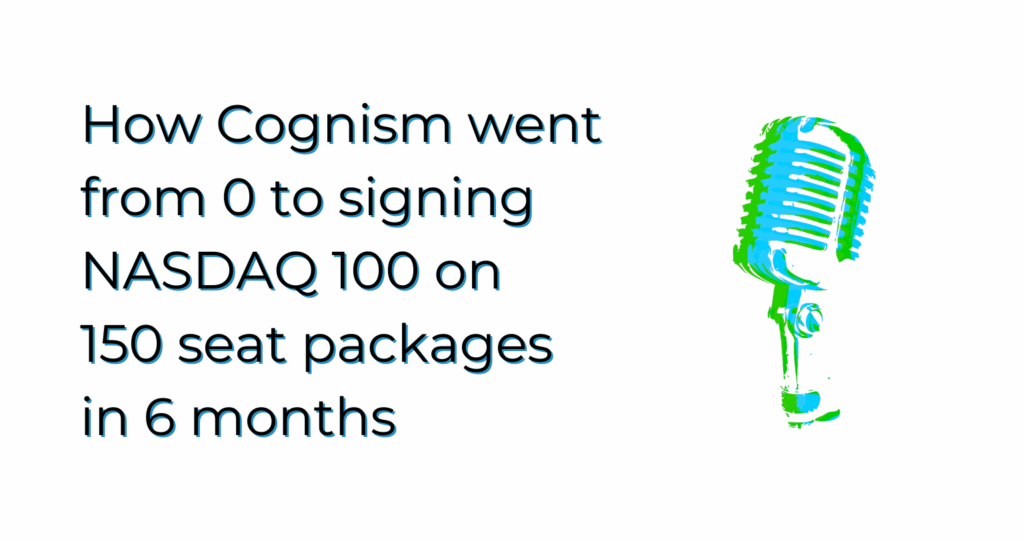 What happens when a Global Head of Sales, an Inside Sales Director, and an Account Executive walk into a bar?

Do they get a few rounds of tequila? Do they start playing hackysack? Do they chat about how the old guy in Squid Game definitely isn’t suspect?

No, no, and most definitely not.

They sit around a table and share actionable insights about their company’s transition from SMB to enterprise sales.

Jonathon Ilett, David Bentham, and Charlie Beale explain how Cognism went from zero to signing NASDAQ 100 on packages up to 150 seats all within six months.

Read on to discover:

There’s one nightmare scenario every company wants to avoid when they make the transition from SMB to Enterprise. You know, the one where the sales cycle lengthens by six months, but you still only secure three-seat deals at the end of it.

Jonathon Ilett, Global Head of Sales, explains how Cognism prevented this outcome by setting clear KPIs and creating action plans to achieve them.

“Our high-level goals for the transition to enterprise were pretty simple. Get to the validation stage and achieve proof of concept. Reaching these goals meant we’d be comfortable selling into enterprise as long as our product was ready, mainly in terms of integrations. When we did pipeline reviews, we ensured that we were talking to the right people and giving them trials; that was a key indicator that the transition was working.”

Other KPIs focused on included consistency between MBs and MAs and a massive uptick in the number of seats sold per package.

To achieve them, Ilett says:

“We paired up SDRs and AEs and assigned accounts to them. That meant they could strategically penetrate accounts and that their success was entwined, improving accountability. We also provided training to our teams which enabled them to tailor their approach to outreach.”

This move was part of a wider restructuring of the outbound sales team, which involved a split into three different verticals, each with their own targets and budgets:

“In the enterprise vertical, we put our best people forward, as we wanted to attack it aggressively. At the same time, in the SMB vertical, we replaced the top performers with new reps to retain our headcount.

This meant we could keep our core revenue machine going, which was vital as we tested the transition. Then, as we gained traction, we began to shift the ratio between SMB and Enterprise to reflect the revenue each verticals were responsible for.”

So how did the team react to the changes? Ilett explains:

“When you make a move like this, you have to sell people on it, so it was a case of laying out the future state and explaining why we made the decision. Transitioning from SMB to enterprise is a big shift from a volume-based model to strategic account penetration. We had to make sure the sales teams who were focused on new verticals were comfortable with them.

The stakes are higher when you’re signing one to two enterprise companies per month and there’s a degree of uncertainty about whether your salespeople can hit the target and get their commission. But by taking calculated risks and putting your best foot forward, you can get buy-in and make it work.”

When the time came for Cognism to steer away from higher-volume SMB deals with low seat counts and towards lower-volume Enterprise deals with high seat counts, Inside Sales Director, David Bentham, had a few thoughts.

“From an SDR standpoint, we assumed the new approach would involve cold calling, emailing, and LinkedIn messaging prospects, just like we did in SMB,” he says.

“What we thought would matter more than previously was reaching the right person within the accounts we prospected. As part of that, we expected that a bottom-up approach would be key to our success, while we’d still leverage top-down outreach to get in front of decision makers.”

So how did things play out in reality?

“As expected, much of our core activity stayed the same,” Bentham continues.

“But referrals became increasingly important to us because they allowed reps to get closer to the ultimate prize. Once they did, we could double down on personalization, including things like Vidyards, LinkedIn voice notes, and direct mail in our outreach.”

Another big change Bentham mentions is the one made to Cognism’s pitch.

“When we targeted SMBs, the onus was on us to educate them about how a contact data provider could help them prospect better and close more deals. On the other hand, most enterprise companies already have a contact data tool. That meant we had to go head to head with our competitors.

To do that effectively, we had to level up the product knowledge of our reps and AEs, particularly on integrations and workflows. Enterprise prospects have teams dedicated to onboarding your tool into their existing tech stack, so if you don’t know your oats, it’s game over.”

And getting reps to this point isn’t easy.

“A key challenge we face is upskilling the reps. Inevitably, there’s a lag between leaders getting to grips with the enterprise space and reps doing the same, but there isn’t much room for manoeuvre.

So to keep our progress on the right track we doubled down on training as soon as reps moved into enterprise roles. This takes the form of a five-day onboarding period which properly prepares them for the rigours of the job.”

Strategy and metrics tell one part of the story. But they don’t tell you how things played out on the ground.

Enterprise AE, Charlie Beale, explores some of the growing pains we encountered and how we changed our tack to see enterprise deals over the line.

“For example, in the latter, there’ll be no legal, procurement, or IT security departments to work through, meaning you can sign a deal the day you give a demo.

On the other hand, each of these departments are more challenging to navigate in enterprise deals; legal in particular. In these cases, you need to get terms and conditions into their hands as quickly as possible so as not to slow down deals. And even when you do, the deadline to close will be around a month.

Where IT security is concerned, you need to ensure that you align with budget cycles. If you don’t fit into the set window an enterprise client has to spend budget, the deal won’t happen, even if people on the ground love your product.”

Beale also says the way you progress through enterprise deals is more structured. And for good reason too:

“For the shorter sales cycle SMB deals, they move from 0-100% completed. This makes sense as there are fewer elements to consider and the contracts are easier to sign. Whereas enterprise deals are broken down into different stages, because of the longer sales cycle.

These are conversation, discovery, validation, contract, and signature. The idea behind this structure is to get prospects through each stage as quickly as possible, which you can only achieve if you’re planning a few steps ahead.

That means when you’re on a call, you need to be sponging information, and asking who the relevant points of contact are within IT security, legal, and procurement so you can get those parts of the deal boxed off.

When you do this, deals should run smoothly. But if you notice undue friction in a particular stage, there’s probably an underlying issue you need to address.”

And as far as closing enterprise deals goes, Beale has the following advice:

“You need to know when to build momentum in your deals and when to give them your undivided attention. Because there are times when you’ll need to go all guns blazing to get a deal over the line and allow other deals to tick over in the background. In this way, you have to be more patient than you would be as an SMB AE, where you can pump through deal after deal. Instead, it’s about finding a flow and striking when the iron’s hot.”

None of this is to say we’ve mastered everything about the enterprise market, or that everything has been plain sailing.

Ilett says: “We had no need for a single sign-on functionality when we catered solely to SMBs. But that became an essential requirement when we transitioned to enterprise. In terms of our legal considerations too, enterprise companies want MSAs on their paper and initially, we only had the resources to deal with one to two per month.”

That said, Ilett emphasises that you have to take a leap and work through any hiccups. “If you try to predict everything before you launch, or launch on a microscopic scale, you’ll be in trouble.”

For Bentham, on the whole, the transition has been empowering: “Particularly with the SDR role, there’s a perception that it’s all about cold calling. But with our new structure, reps see how they can elevate themselves and have conversations with massive decision makers at household names – all in a short space of time. That’s been important for the wellbeing and energy of the team.”

Finally, Beale reflects on the ground we’ve gained in recent months: “We’re speaking to companies that have IPO’d or are IPOing on a regular basis, which is a world away from where we were at the beginning of the year. Whereas a huge package for us then would’ve been 20 seats, we’re now firing out pricing decks with 150-seat packages, which is massive for us as a business.”