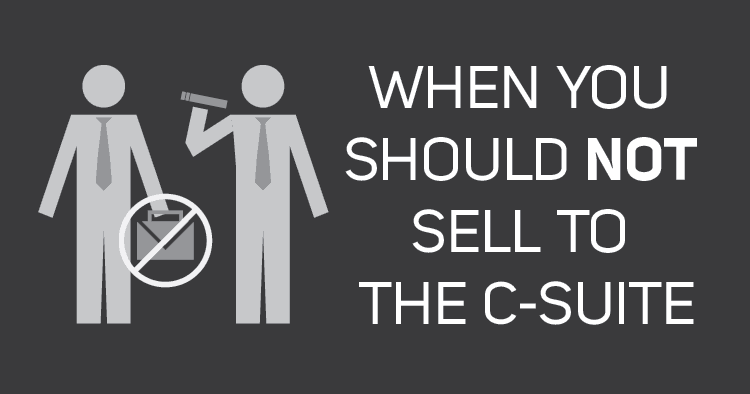 Ask a room full of “old hands” in sales for sales advice, and pretty soon one of them is bound to shout “sell to the c-suite !”. Selling high up is one of the “unquestionable truths” in sales.

I spent a fair chunk of my career walking the hallways of Fortune-100 corporations – and a lot of that was spent as a senior executive, or working closely with other senior executives. And I’m going to give you some contrarian advice: in some cases, trying to sell to the c-suite is the worst thing you can do to advance your sale.

Where, generally speaking, selling to folks who have a budget and decision-making authority is good advice, selling too high up may well backfire.

And unfortunately, once you blew your shot with the senior guys, you almost always blow up the entire account. So, in no particular order of importance, here are ten situations in which you don’t want to be caught trying to sell to senior executives.

1. It’s not a strategic issue

Senior guys are big picture guys – they don’t care about details (much). If what you’re selling does not impact their strategy, they won’t care – and you’re better off finding someone a few levels down who does.

If you’re selling paperclips, photocopiers, car leases or scanning software – chances are you want to be speaking to someone outside of the c-suite.

At any point, senior executives don’t simply care about the big picture – they care about specific aspects of that picture. Their mind may be on growth, or cost containment. International expansion, or shoring up in home markets. Launching new products, or improving relationships with existing customers.

Many times, I’ve seen vendors shut down simply because they weren’t selling anything that related directly to the senior guys’ agenda.

3. You have no track record/credibility

In spite of popular belief, (most) senior executives are not “visionary risk takers”. They’re more like stewards of an oil tanker, making gradual corrections in course until they get to their chosen destination (or alter the destination, but that’s another story).

Unless you have some kind of proof that you can do what you say you’ll do, you may find yourself ushered out the door faster than you can say “groundbreaking technology” (that is, if you even got in in the first place).

4. You don’t have the necessary gravitas

I had to learn this one the hard way – as a young management consultant with one of the Big-4 firms, I thought I had a thing or two to contribute (unfortunately, most of it came from what I’d read in other people’s white papers).

Imagine my frustration when I was asked to sit in on boardroom meetings and asked to “observe”. Imagine my even larger frustration when – once I couldn’t contain myself any longer and decided to speak up – nobody seemed to listen. I might as well have been speaking another language, or dressed up as a mime. People barely acknowledged my presence, let alone listen to my ideas.

The problem wasn’t that I was young per se – it was that I hadn’t yet learned how to project gravitas and present my ideas clearly, concisely and with impact. Unless you’re comfortable doing that, you’ll never be able to successfully sell to the c-suite.

I have a category of clients who never, ever have trouble getting through to senior decision makers. When they call, executive assistants rush to put through their calls, and senior executives interrupt meetings on the spot to pick up their phones.

Who are they ? Headhunters.

Why ? Because they are career relevant. If you’re not in some way able to contribute to what senior executives like to call “their legacy”, chances are you’ll have a hard time selling to them.

Senior guys don’t make decisions around whether to serve vegetarian snacks in the company restaurants or cover the roof of their corporate headquarters with edible moss.

If what you’re selling is insignificant in terms of impact or investment – you’re better off selling lower into the organization.

The c-suite looks at things in terms of value – not cost. And if things are too cheap, that raises questions. A few years ago, I stumbled into a major project with a prospect – something that could have been a game changer for my fledgling new practice.

At some point, I submitted a first estimative bid. The next day, I received a phone call from my internal champion. His question ? “Before I send this through to my boss: are you sure you’ve included everything in your estimate ?” Turns out we were roughly 40% cheaper than all the other bids.

In this case, I got lucky and things turned out OK – we revised the bid (there were indeed a few misgivings on our side regarding scope), and moved on. But you may not be so lucky.

Where most buyers will try and get you to come down on price, consider yourself lucky on this aspect: senior executives will almost always look at value first, and cost second.

8. You sell a commodity

If you’re selling a commodity, don’t sell to senior folks. For all the reasons outlined above, you’re much better off selling to the person who has “corporate jurisdiction”.

9. You don’t have internal allies

Up until the 1990s, senior executives made decisions without much interference from anyone else. Sure, they may have asked a trusty lieutenant for their thoughts, but generally speaking they made up their minds, walked out of their office and informed everyone of what they decided.

No more. Large corporations are more democratic than ever, and their decision making processes reflect that fact. No one (not even senior executives) makes decisions in a bubble anymore – and if you don’t have internal allies to lobby on your behalf, your efforts to sell to the c-suite will prove to be that much more difficult.

Let’s imagine your typical senior executive. Highly educated, with 20 years or more of experience, having worked in roughly 3-4 corporations. What are the chances that, over those 20 years, they’ve not worked with, hired or come across someone who does what you do –and liked what they saw ?

That’s right. Most senior executives already have a firmly established pool of preferred vendors, which they tend to take with them on their corporate journey.  That’s not to say they’re not open to change (52% of B2B buyers would consider switching vendors), but it is something to be aware of.

There is one exception – one circumstance that overrules everything I’ve outlined above. You can be the outsider, with no proven track record who’s selling commodity items, and still come out ahead. What’s the exception ? The strength of your personal relationship.

In the end, people buy from people they like. And that includes senior executives. If your relationship is strong enough to give you a real shot, go for it. 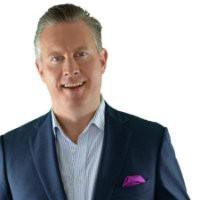