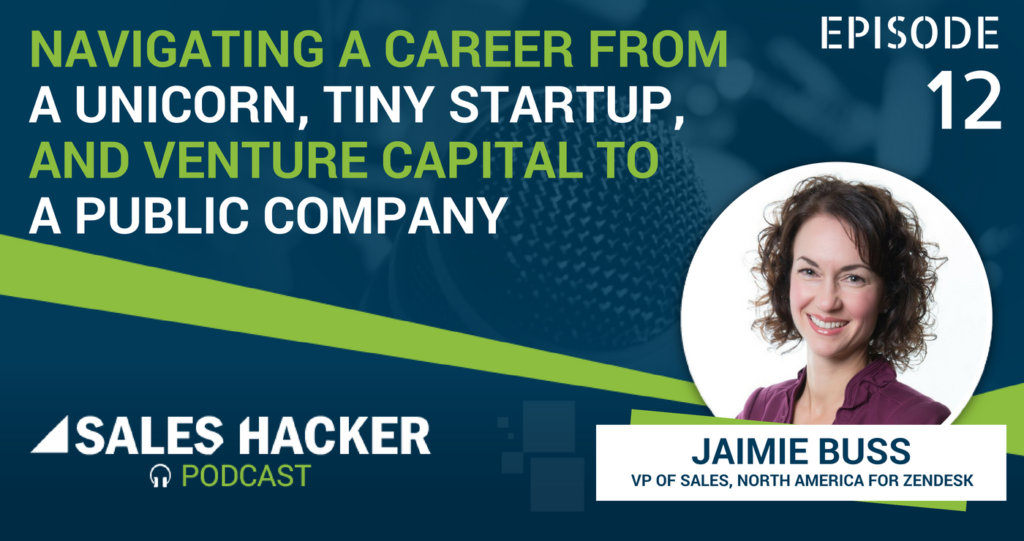 Why have a career in sales? Tune in to episode 12 of the Sales Hacker podcast with Jaimie Buss, VP of Sales, North America for Zendesk as she talks about startups careers and transitions!

Below is a quick summary of episode 12.

Sam Jacobs: Before we do that we’ve got an exciting new sponsor! The company’s called Aircall and we want to thank them. They empower sales and support teams to ace every call with a phone system specifically built for their favorite business tools. With Aircall you can now make every conversation count!

Sam Jacobs: Hi, everybody and welcome to the Sales Hacker podcast! It’s your friendly neighborhood host, Sam Jacobs. I’ve got a very special interview today. We’re going to be talking to Jaimie Buss—currently the VP of Sales, North America for Zendesk.

She’s a veteran sales leader and has experience selling everything from SaaS to virtualization, storage, and networking.

Jaimie Buss: Thank you, Sam! Excited to be here.

Sam Jacobs: We’re excited to have you. As we do, we start with your baseball card. For those that are in the Stone Age, what is Zendesk? What’s your revenue range like?

Jaimie Buss: We’re a public company at $500 million in annual run rate—a pretty big benchmark for us. Zendesk is a support and ticketing platform primarily used B2C and B2B internal use cases. Our company is now about 2,000 people worldwide and we’ve got about 200 salespeople in North America.

Jaimie Buss and the Road to Zendesk

From consulting to sales engineering

Jaimie Buss: I definitely did not see myself landing in sales—I did my undergrad in Environmental Engineering went on to do consulting work for Deloitte. After this came a Sales Engineering role at Inktomi.

Sam Jacobs: How did you go about making that decision?
Jaimie Buss: When I first joined Inktomi, I was brought in under the IT organization to help bridge a gap between sales and IT on the applications that sales needed.

That was a six-month tenure at which point I presented my first application to the head of sales engineering and he suggested I join the sales organization.

Inside Sales at VMware

Jaimie Buss: After almost three years there, I moved to VMware as an Account Executive. This was great because I really pursued VMware hard.

I had to get on the phone first with one of their hiring managers and he said, “Talk to Carl.” So, I convinced Carl Eschenbach I really wanted to do it. They brought me in to interview and I literally had to speak with Diane Greene and convince her that I could be a great sales rep for her team.

Sam Jacobs: When did Andreessen happen? And how did you end up at Zendesk?

By working with these startups I was able to understand the natural motion for those specific products. How easy was it to try and how quick was that trial? Was that trial free and was it a freemium model?

Once I learned to kind of put these stats together, I could start to pattern-match. That’s what I think I brought when I went to Andreessen Horowitz.

How and When to Execute as a VP of Sales

Sam Jacobs: Once you land your job as a VP of Sales, how much time do you give yourself to learn and observe before you start executing?

Jaimie Buss: I keep the trains running on time for what’s there and running. I’m not going to come in and make grand, sweeping changes on day one.

Then I’ll start changing some of the acutest things as quickly as I can while I’m figuring out the longer, more strategic bets. For example, when I came into Zendesk, we had nine Sales Development Reps (SDRs). But, that was for inbound and outbound, and we get a lot of inbound! This clearly meant we needed to focus on creating more bandwidth for outbound sales.

Growing and scaling sales at Zendesk

Sam Jacobs: What was Zendesk’s Sales organization like when you inherited it? And, what does it look like now?

Jaimie Buss: It was a sizeable Inside Sales team and a limited Field team. They had a small SDR team—primarily Inbound and an SMB sales team. This team covered everything from lead qualification to closing for companies with less than a 100 employees. Any prospect over a 100 employees was covered by AEs.

I changed up our Field team’s structure and placed them where there was demand. Our Outbound program outpaces our Inbound after we made the split.

Jaimie Buss: 6sense—they help us spot who shows buying tendencies and where they’re looking on our website. The Outbound team loves it!

Jaimie Buss: Go pick up or listen to The Confidence Code. I wish I had read it a long time ago. As women, we tend to wait until we’re 110% ready to take on a new opportunity. That’s been my MO for a lot of my career. What we need to realize is that our male counterparts tend to feel they may be 60% ready, but they’re all in!

How to get in touch with Jaimie

Jaimie Buss:  We are hiring and we’ve got openings in everything from SDR to Account Executive. I’m only hiring in New York and in San Francisco, and then we’ve got some field positions as well. My management roles are 100% filled. LinkedIn’s the best way to reach me.

Sam Jacobs: That’s fantastic! Well, Jamie, thank you so much for participating in the podcast, and I hope to see you in person soon!

Another wonderful interview with Jaimie Buss, VP of Sales North America at Zendesk. This is Sam’s Corner—thanks, everybody for listening!

Two things. First is generic and strategic—it was directed to the women in the audience. Don’t wait till you have 100% confidence in your expertise on a new endeavor before jumping in. The timing is important when it comes to a new role and a new job.

Here’s the tactical part—Jaimie compensates her Inside Sales team for both the self-service leads and SMB leads. This way, it’s just easier to give credit for quota attainment and it also avoids any channel conflict.

To check out the show notes, see upcoming guests, and play more episodes from our incredible lineup of sales leaders, visit www.saleshacker.com/podcast-subscribe

You can also find the Sales Hacking podcast on iTunes or Stitcher. If you enjoyed this episode please give us a share on LinkedIn or Twitter.

Finally, a special thanks again to this month’s sponsor, Aircall. If you want to get in touch with me, find my social handles in my bio below.

I’ll see you next time!

How to Implement Effective Account-Based Marketing Strategies with Auseh Britt