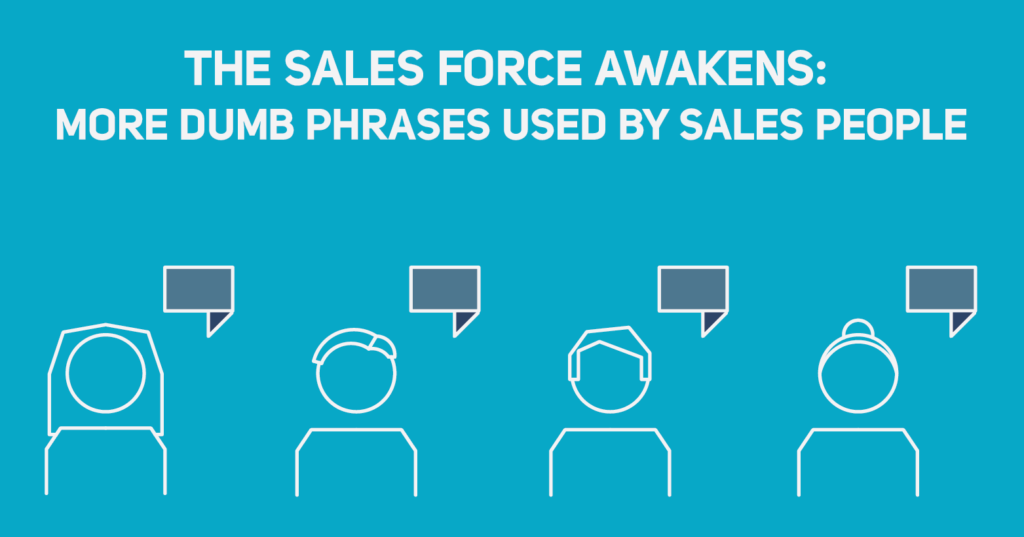 We published the 6 Dumbest Sales Phrases and the response was understandably lively. As sales people, we cannot afford to sound stale and fall into familiar rhythms that raise red flags in the minds of our prospects.

It’s human nature, people running in the same circles start sounding like each other and repeating themselves with rhetorical shorthand and verbal crutches. We see it among athletes (“One game at a time”), politicians (“Folks…”), and yes, sales people.

When we hear one of these phrases, it feels insincere and prepackaged. Our walls go up. “What is this person trying to sell me?” We don’t mind being sold to, but we don’t want it to feel like we’re being sold to. We want an authentic and transparent experience that at least appears to be tailored specifically to our needs.

But there’s a lot more than 6 dumb phrases in sales, as evidenced by the avalanche of comments from readers sharing their own examples of oft-repeated lines…

Krissie Harrigan: One that I often had to coach to in the past is “To be honest with you …” – this applies in general, not just sales. So, you’re saying you’ve been dishonest up to this point, but now you’re going to be honest? *shudder*

Glenn Holland: “I’ll be honest/blunt”. It’s not limited to salespeople. EVERYONE is saying it. I conclude it means we live in a world of platitudes and spin. If you can’t give people the impression you’re genuine by your actions and speech, telling someone you’re about to hit the “honesty button” isn’t going to help.

Telling someone you’re about to hit the “honesty button” isn’t going to help. @TheHollandCloud

John McGoldrick: Let me be honest, ‘Does that make sense?’ is literally the most patronizing question ever. ‘Thoughts?’ is a close 2nd.

Barbara Giamanco: ”Let me be honest”. “So were you just lying to me this whole time?” is immediately what pops into my mind. Words are power. Use them wisely.

Lisa D’Antonio: I got the “Keep me honest” phrase scrubbed from my vocabulary 20 years ago by a hard-nosed CEO when the phrase was “To be honest with you” and he quickly interrupted me with “NO, I would rather you lie to me!”

Rob Lawrence: “Keep me honest” is revolting as is the “take off my sales hat” thing. Either you’re being authentic or not. The moment you make a meta-reference to such you are implying that you are typically dishonest.

The moment you make a reference to being honest you’re implying that you typically are not.

A tip for improvement

Gabe Phillips: It’s funny, I’ve actually had colleagues sit in on my meetings sometimes with the sole purpose of critiquing my speech. For example, phrases I repeat, counting filler words, etc. It’s sometimes demoralizing to see what I thought was a good meeting picked apart!

I’ve had colleagues sit in on meetings to critique my speech; phrases I repeat, filler words.

Kevin Orme: “At the end of the day.” We have to ask each other if that makes sense.

Gabriel Moncayo: I too hate “Does that make sense?” Traditionally, I’ve had reps substitute with “Did I explain that well?” — Have you found any other useful substitutions?

I’ve had reps substitute “Does that make sense?” with “Did I explain that well?” @Gabemoncayo

Jeff Waters: Every time a salesperson says “does that make sense?” I have to restrain myself from punching them in the nose.

Terry Wall: There’s another one syllable demon that could be added to your essay: the dreaded “so!” I don’t know where it came from, but in the last few years, I’ve noticed virtually every response to a question starts with that freakin’ word. Drives me nuts!

Tommy Lindsey: How about, “well I’m just the sales guy” so this immediately absolves me from knowing anything key to this conversation. Truth be told, I’ve also heard fellow professional services people use this one too so maybe it’s a general copout that can be used by all 😉

Ben Cesare: Beginning a response with “So” .. I hear it everywhere.

This post is not literally on fire. But it’s pretty good.

Jean Paul LaBelle: Why is it that so many people fail to understand that ‘literally’ means ‘exactly as stated’. . . so if you are saying that “the idea literally came to me from out of the blue”, you better mean that it actually fell out of the sky, or jumped out of the water at you! Just sayin’!

Wayne Hatter: The one I despise is “Let me give it to you straight”. Ooh… that one burns me up.

Doug Ziemke: I once worked with a sales rep who signed his e-mails “$cott”. Yes, his name was Scott. Yes, he used a dollar sign. I often wondered how many customers walked away when they saw that…

Nancy Matthews: “Here’s how I see it, [insert prospect’s name]”, “Here’s what I can do for you, [insert name]”. Excessive use of “I” to infer some “I’m the answer to your prayers” quality…and, the ever-familiar insertion of my name in every 3rd sentence that’s said to me…

Andy Farquharson: Another contender for the list is “What are your top 3 priorities for this year?”

Chandra Osterhaus: “Let’s compare apples to apples.” If we are all the same then why change? I hate that phrase. I generally cringe and cry a little inside when I hear it.

Sheldon Buytenhuys: “That’s a great question”, absolutely makes my blood boil. Have all my other questions been bad?

Jessica McQueen: Let’s go ahead and throw in “utilize” as the most overused and oftentimes unnecessary word in the pitch.

Mark N. Tuggle, Ph. D.: My phrase I’d like to see disappear in 2016 is “You guys.” I know that people now use this term in a non-gender-specific way, so maybe I’m showing my age here, but I feel like the phrase is simply too informal for sales presentations & conversations and still potentially offensive to women who don’t like to be referred to as guys.

Rather than “you guys,” how about going back to the tried and true use of first names?

Cornelius Goodwin: “Tell ya what I’m gonna do…”

🙌  Teaching reps how to earn the right to ask questions.
🙌  Which questions to ask.
🙌  When to ask them.

👍 Stop talking about what you do, talk about the pains you solve!

👍  I hope to help you focus on a more relaxed conversational style that helps you go from strangers to acquaintances to trusted business allies with your prospects and clients.

🏆 Top 25 Inside Sales Professional by the AAiSP for the last 5 years.
🏆 Top 10 Sales Development Leader as voted by Inside Sales and Sales Hacker.
📰 Published: Harvard Business Review, Huffington Post, Inc, and NBCNews

When To Hire A Sales Consultant: A Simple Framework To Guide Your Decision

What’s in your Personal Health Stack? (9 Ideas to Build Yours)

How To Have A Sales Kickoff That Doesn’t Suck